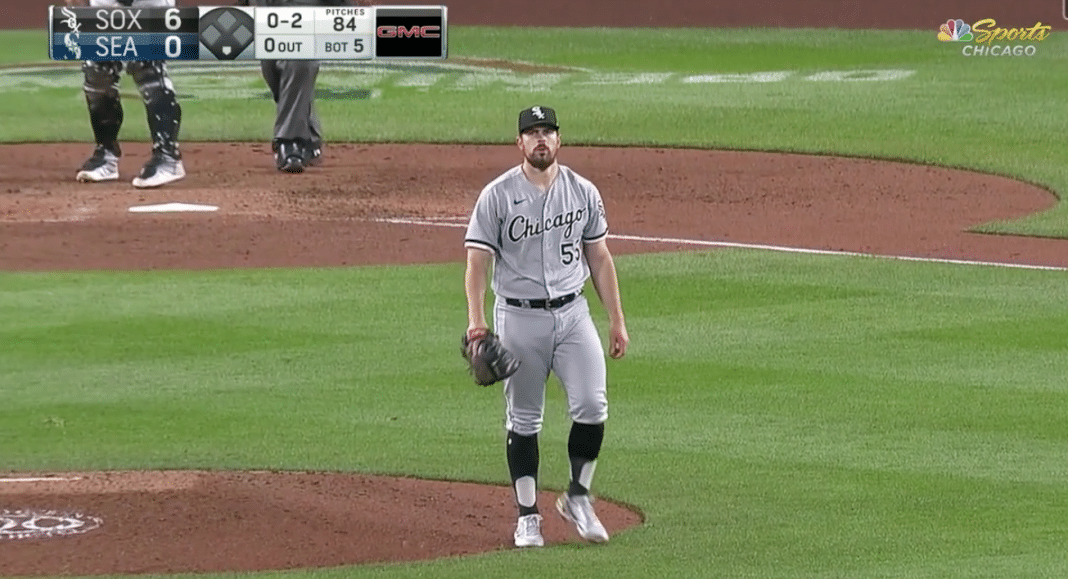 First time in #WhiteSox history they have had multiple pitchers with 5 strikeouts & no runs allowed in a game.

Yermin Mercedes bounces into a fielder’s choice to shortstop.

Carlos Rodon in early trouble as Mitch Haniger gets credit for a double after Madrigal can’t make a catch in shallow right field and then can’t pick it up to make a throw at second.

Yasmani Grandal takes jumps all over a 0-2 mistake from Sheffield and launches a long homer to left.

Billy Hamilton grounds out to short.

Tom Murphy flies out to Robert.

Sam Haggerty also flies out to Robert in center.

Madrigal with a groundout to short.

J.P. Crawford singles to center. Crawford moves up all the way to third after a throwing error on a pickoff attempt from Rodon.

France flies out to center and it’s not deep enough to test Robert.

Seager strikes out swinging and Rodon escapes without giving up a run.

Mercedes lines a single to left.

Sheffield thought he had a double play, but Seager boots it at third. Mercedes safe at second and Grandal reaches safely at first.

Garcia drops down a bunt and the Mariners catcher can’t field it, the bases are loaded with nobody out!

Vaughn gets his first career RBI after getting hit by a pitch.

Hamilton makes it 3-0 Sox with an RBI-single to center. Bases still loaded.

Madrigal grounds into a double play, but Grandal comes in to score.

Robert pops out to shortstop.

Moore walks and then steals second base.

Rodon with three straight walks as Fraley loads the bases with one out.

Haggerty bounces one to Moncada, who throws home for the force.

Rodon gets out of the jam by striking out Crawford on a slider way outside and in the dirt. Huge momentum shift right there.

Abreu fouls out to first.

Moncada lines a single to left.

Mercedes bangs a double to left. Hit it so hard that Moncada can only get to third base.

Grandal gets the job done and drives in both runners with a single to center.

Garcia with a fielder’s choice to shortstop. Grandal out at second.

France hit by pitch. The second for Rodon.

Seager with a fly out to left field.

White lines out to left.

Rodon’s night is done and what a solid start. He strikes out nine and only gives up two hits, three walks and no runs.

Drew Steckenrider in to pitch for the Mariners.

Hamilton lines out to second base.

Madrigal grounds out to second.

Michael Kopech comes in to pitch for the White Sox.

Haggerty strikes out swinging. Kopech can’t be touched so far this season.

Abreu grounds out to Seager.

Mercedes with another hit!

Grandal walks and the bases are loaded.

Vaughn grounds out to third.

Crawford with a groundout to Moncada.

Michael Kopech has been amazing in his first two relief appearances.

With #Kopech out for the night after 2 IP, here are his K’s. #WhiteSox pic.twitter.com/g11RxGkyK8

Will Vest in to pitch for the Mariners.

Hamilton flies out to center.

Robert grounded out to second.

Jose Ruiz in to pitch for the White Sox.

White with a pop fly to Madrigal.

Murphy flies out to center.

Abreu lines out to center.

Mercedes walks after a foul ball doesn’t get caught by the catcher.

By the way, Mercedes is 12-for-18 through five games. And guess what, he tied another record.

Yermín Mercedes: 12 hits ties the #WhiteSox franchise record for most hits through the team's first 5 games of a season set by Tom Paciorek in 1982.

And Mercedes didn't even play in one of the games!

Grandal flies out to left.

Ruiz stays in and retires the side in order.

White Sox with a solid victory. Easy cruising from the fifth inning on. Rodon, Kopech and Ruiz combine to strike out 15 and give up only three hits.