The Chicago Bulls finished 2020 with a final regular-season record of 22-43, good for 11th place in the Eastern Conference. That season marked an end to an era. Bulls general manager Gar Forman was fired in April, John Paxson got reassigned to a senior advisor role, and head coach Jim Boylen was fired in August. These moves paved the way for previous Oklahoma City Thunder head coach Billy Donovan to step in for the Bulls. Donovan will become the 24th head coach of the franchise and begin his tenure in 2020. He will have an uphill climb as most players on the Bulls have less than three years of experience in the League. Zach LaVine led the Bulls in points per game last season with 25.5, Lauri Markkanen followed with 14.7, and Coby White chipped in 13.2. They seem to have a decent defensive team, but the Bulls were ranked 27th in offense. It should be an interesting few years without Forman. Bulls fans have been clamoring awhile for that firing. 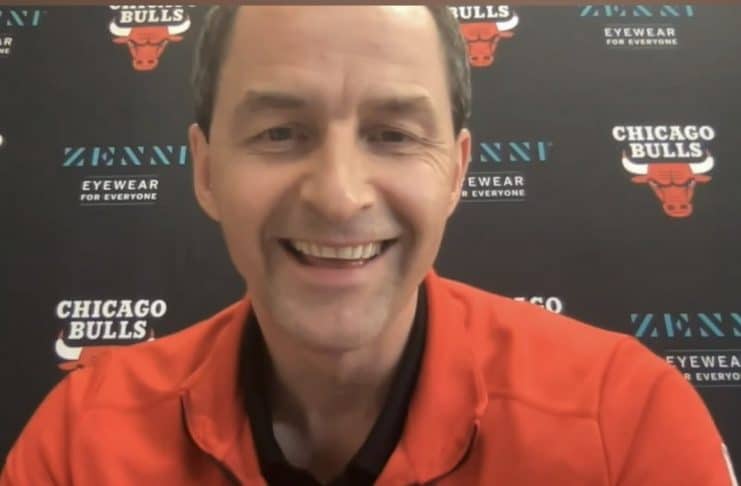 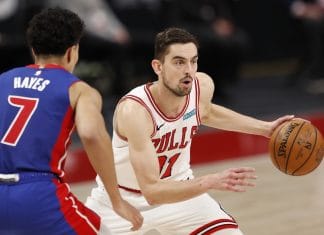 Erik Lambert - Jul 26, 2021 0
The Chicago Bulls are entering a particularly interesting offseason. Last year didn't go as new VP Arturas Karnisovas had hoped. He made his first big splash since taking over basketball operations when he engineered...
Read more 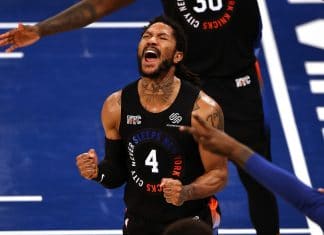 Erik Lambert - Jul 25, 2021 0
The Chicago Bulls have a clear agenda going into the 2021 offseason. That is to find an upgrade at point guard. The position has continued to be a significant weakness in their starting lineup....
Read more 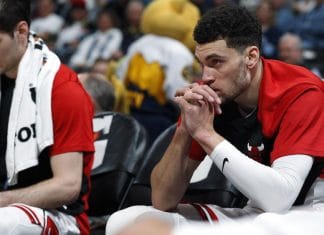 Conner Grant - Jul 19, 2021 0
Bulls fans all over the world were excited to watch Zach LaVine make his official Olympic debut. After watching him perform well in each of Team USA's exhibition games it was officially time for...
Read more 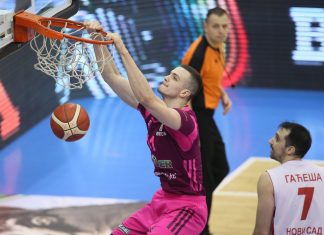 The Bulls Have Officially Signed 2020 2nd Round Pick Marko Simonovic

Conner Grant - Jul 13, 2021 0
In the second round of the 2020 NBA Draft, the Bulls selected 6'11" Marko Simonovic out of Serbia. Upon choosing Simonovic the Bulls front office announced he would continue to play overseas for at...
Read more 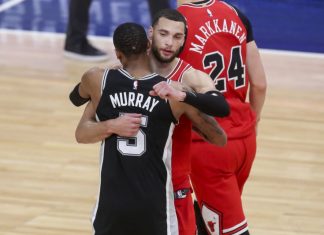 Conner Grant - Jul 12, 2021 0
All Bulls fans know the team is in need of some help at the point guard position. The team itself even knows that they are weak at that position. There's been a ton of...
Read more 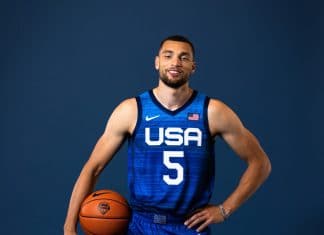 Conner Grant - Jul 9, 2021 0
USA Basketball practice kicked off this week and it was the first time this group of players has been together. Bulls shooting guard Zach LaVine is amongst that group of players. After capping off...
Read more 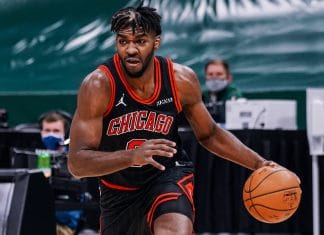 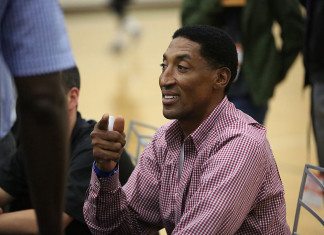 Conner Grant - Jun 25, 2021 0
Just six days ago the Brooklyn Nets lost in game 7 to the Milwaukee Bucks. That was it for the Nets. The projected NBA champs were out. In this series Nets forward Kevin Durant...
Read more 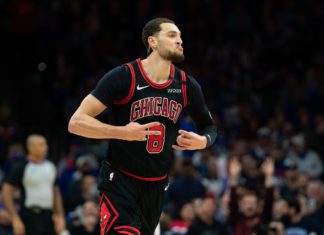 Zach LaVine Will Represent Team USA In The Olympics

Conner Grant - Jun 23, 2021 0
If anyone is worried about Bulls shooting guard Zach LaVine getting in enough basketball this summer you can stop. After coming off his first All-Star appearance LaVine will head to Tokyo this summer. He...
Read more 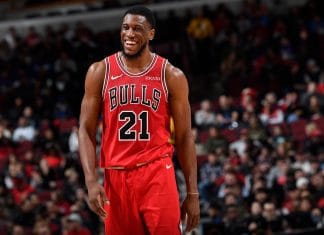 A new season and a chance to end this year on a positive note? Yes, the Chicago Bulls have a chance to flip the switch in 2020, after all.

Setting the record straight, the 2019-2020 season was one of the worst years to watch Chicago Bulls basketball in every way you can imagine.

Finishing 22-43 and seven games out of playoff spot, the COVID-19 pandemic canceling the season was the final nail in the Bulls season's coffin. In some ways, it also let the starved fanbase, which has endured some excruciatingly painful moments over the last two decades, move on and look forward to another lottery pick.

Does that beg how a storied franchise like the Bulls hit an all-time low in 2020?

The answer? A front office that operated on luck, good fortune and strong relationships with Jerry Reinsdorf allowed them to stay in positions of large magnitudes and make imperative decisions much longer than welcomed.

Despite the Bulls making the playoffs seven times under former GM Gar Forman, in what should be considered a relatively successful stretch, it became more and more clear that Forman was in way over his head and could not adapt and overcome the new ways of the NBA.

Instead of seeking out ways to get the franchise up-to-speed in terms of personnel and advanced analytical scouting, Forman and VP of Basketball Operations John Paxson chose to blame the struggles on five head coaches they hired and ultimately fired over a 10-year span.

Jim Boylen taking over for Fred Hoiberg was not a big deal in itself. However, when it became apparent that Forman nor Paxson were seeking out other proven head coaching candidates, Bulls fans became irate.

A young team with a series of skilled players looking to develop, overshadowed by a first-year head coach who became obsessed with the spotlight.

That's how Jim Boylen's time as the Bulls head man will be remembered. From the infamous, unjustified timeouts in fourth quarters to benching Zach LaVine in close and winnable games, Boylen was criticized publicly by his star player and coached like Doc Rivers.

In a game that the Bulls played some of their best basketball, Jim Boylen went after one of the most high-profile and proven NBA coaches at half-court over what he thought were "illegal screens" set by Montrezl Harrell.

Boylen was seen on camera yelling and pointing at former Clippers Coach Doc Rivers before both were ejected. In his postgame presser, Boylen tried to play tough guy and said he was defending his guys, while Rivers laughed it off with the rest of the league.

Once more, the Bulls continued to be the NBA's laughing stock because of their head coach's antics, instead of letting LaVine's 31 points and a winning shine.

Speaking of LaVine, in his one-on-one interview with Yahoo NBA Writer Vincent Goodwill,  LaVine spoke on the lack of trust with Boylen.

"I feel I earned that trust, but I guess he feels differently. Other players around the league — and everybody's situation isn't the same — I feel other players worldwide have that trust. I guess we haven't got there."

Let's be very clear, Zach LaVine is a great player, and Bulls fans should be grateful to have him. He is a star and was being put down by his head coach, and in a player-driven league, that is unacceptable.

Aside from Boylen's antics, the Bulls could not get away from injuries in 2020. From Lauri Markkanen to Wendell Carter Jr and several others, the Bulls had few games at full-strength.

Markkanen's 2020 may have been plagued with injuries, but he struggled defensively, and his three-point shot dropped by two percent, and he did not play in the paint. His struggles are very concerning, especially after he began his career with serious promise. All of that being said, Markkanen was underused in Boylen's offense and was not in a winning position by his head coach.

2021 will decide whether he has a future with the Bulls or not.

As far as Wendell Carter Jr. goes, defensively, he could be a problem for other teams, that is. He was the only bright spot for rebounding last season, averaging just under 10 per game (9.4).

On the offensive side of the ball, Carter Jr. did not shoot much, and when he did, he struggled. But the Bulls Twitter account is telling us that narrative could change in 2021. At 21-years-old, Carter Jr. has a lot of room to improve, but Bulls fans should be excited for what he's displayed so far.

Last but not least is Coby White. After one season, it appears White was a very successful draft pick by GarPax.

White had a stellar rookie season, finishing third in rookie-of-the-year voting and gave Bulls fans something they haven't seen since Derrick Rose - athleticism and speed to the rim.

According to Basketball-Reference, White averaged 13.4 PPG and had a handful of games shooting lights-out from a distance. If his rookie season is any precursor to what he could be, White could be a full-blown star in the NBA.

Reminder, he is only 20-years-old and has the highest ceiling on the roster.

The storyline for the Bulls, and frankly all of Chicago sports in 2020, was the decision to fire Gar Forman and move John Paxson completely out of player and personnel decision-making.

Whether you think he was a few years late or not, Owner Jerry Reinsdorf decided to move the franchise in a proven winning direction.

Karnisovas constructed the current Denver Nuggets roster. If you've been following that team over the past three seasons, you'd know they've been one of the most successful teams at drafting and player development.

As far as respect among front-office officials goes, Karnisovas is high on the list.

A few months into the job, Karnisovas went out and got perhaps the best available coach on the market: Billy Donovan. Somehow, the Bulls' new VP was able to convince Donovan to sign a multi-year deal with a young team in the midst of a rebuild.

With several other openings, most of which appeared to be more attractive, Donovan chose the Bulls. A very, very positive sign for the organization.

The good news just continued to come in this offseason, as they also moved up to the fourth overall pick in the NBA Draft.

Who are the Chicago Bulls?

The Chicago Bulls are a team in the National Basketball Association. The owner of the Chicago Bulls is Jerry Reinsdorf, and the current head coach is Billy Donovan. The team was founded in 1966. The Bulls play at the United Center in Chicago and are part of the Eastern Conference.

Will the Bulls look to trade Zach LaVine?

LaVine is only 25, but the majority of the Bulls core is 20 and 21-years-old. That being said, it’s improbable LaVine is dealt with by Karnisovas. LaVine is still a rising star and an elite scorer in the NBA. The asking price would be very high, but anything is possible.

Can Billy Donovan take the Bulls to the playoffs?

The Bulls could be a playoff team. They have some big holes, but with their offensive pieces, a top tier head coach, and money to spend, the Bulls should be a better team than the Magic, Wizards, and Hornets. Those three were above them, fighting for the eighth seed.

How will Lauri Markkanen perform in 2021?

Markkanen may have been dealt a bad hand in Boylen's offense, but his inability to rebound and lack of presence in the paint as a seven-footer was disheartening. Markkanen should be better under a new head coach, and early preseason games show his rebounding has improved.

Can the Bulls attract big-time free agents in the 2021 class?

The Bulls have not been a free-agent hotspot. But that's because they've chosen to be run by executives and coaches that big-time players don't believe in or have issues with. The 2021 Bulls have to be high-scoring, above .500 and eliminate drama to get a key free agent next offseason.

Who will be the best player on the Chicago Bulls in 2021?

Zach LaVine. LaVine needs to improve defensively, but his skill and basketball IQ have been consistently overshadowed by drama since his arrival. While many Bulls fans realize how good he is, many don't, and that's a problem. With Billy Donovan at the helm, expect LaVine to thrive this season.