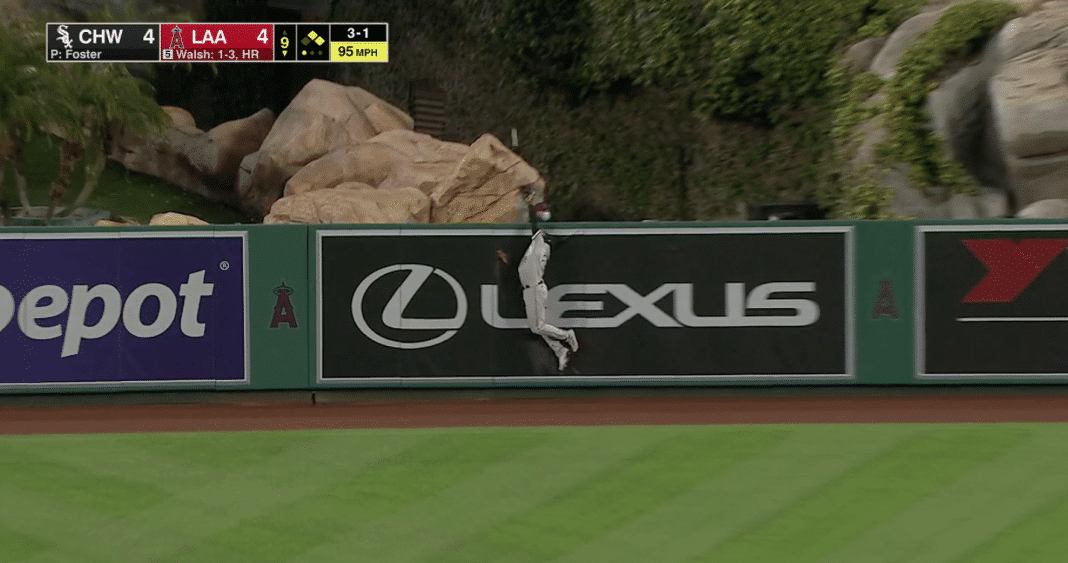 Shohei Ohtani starting for the Angels. He’ll also bat for himself.

Tim Anderson works a 2-0 count, but grounds out on a 2-2 pitch to David Fletcher at second base. TA with an awkward step on the first base bag.

Oh my goodness. Ohtani reaching triple digits against Adam Eaton. After throwing a 101mph fastball Ohtani strikes out Eaton swinging on a splitter. Not fair.

José Abreu frozen on a 2-2 breaking ball, but Ohtani doesn’t get the call in the inside corner and then he walks the White Sox first baseman.

#WhiteSox SS Tim Anderson out of the game after this play in the first inning. pic.twitter.com/ityZZLgVKf

You hate to speculate, but Tim was wincing before he got to the bag. Lots of fans fearing he may have injured his hamstring.

Tim Anderson was removed with left hamstring tightness. He is day-to-day.

Fletcher grounds out to Moncada at third.

Wow. Ohtani with a 451-foot home run to right-center field.

But can your pitcher do… THIS? pic.twitter.com/vW7nesRyZ6

Mike Trout follows up with a single to left.

Anthony Rendon singles on the first pitch to center. Trout to second.

Cease falls behind 3-0 to Jared Walsh, gets to a full count but walks the lefty to load the bases.

Oh shit. Off the bat it sounded like Justin Upton had a grand slam, but he only gets a sac-fly to deep right field. Trout scores and Rendon tags up to third. It’s 2-0 Angels.

Cease is missing badly and falls behind Jose Iglesias. Fortunately for the Sox Cease gets the Angels’ shortstop to chase a slider low away for strike 3. Cease with 30 pitches in the first inning.

Yasmani Grandal hits it into the shift. Fletcher makes another play.

Juan Lagares flies out to Robert in center field.

Fletcher reaches on a fielder’s choice to shortstop. Garcia gets Stassi out at second.

Ohtani with another missile, but it’s right at Robert in center.

Billy Hamilton leads off the third with the first hit for the White Sox.

Tough break for Nick Madrigal. Lines out to Walsh at first base.

Garcia with his first at-bat after coming in for Anderson. He grounds out hard to Rendon. Hamilton remains at second base.

Eaton grounds out to Iglesias to end the inning. White Sox did make some good contact against Ohtani, but have nothing to show for it.

Cease keeps getting hit hard, but the Angels keep hitting it to White Sox defenders. Trout smokes one to Robert in deep center.

Rendon grounds out to Garcia.

Walsh flies out to Robert in right-center. Good news is Cease retired the side in order, but man the Angels are hitting the ball hard against him.

Ohtani starts the fourth by striking out Abreu.

Grandal takes a first-pitch strike and then four straight out of the zone.

Robert strikes out swinging. Ohtani at both ends of the pitching spectrum that half inning.

Cease falls behind 2-0, but comes back to strike out Upton.

Fletcher comes through with an RBI-single to right field.

Ohtani grounds out to Garcia.

Hamilton with good contact, but he lines out to left.

Madrigal reaches on a single.

Garcia safe at first on a fielder’s choice, Madrigal out at second.

And then a passed ball and a throwing error on the strikeout of Moncada leads to a tie game!

Ohtani comes out, but the Angels say it’s not because of an injury. Steve Cishek gets Mercedes on a ground ball back to the mound.

Cease gets Trout and Rendon to groundout to the left side and his night is done with two outs in the fifth. Tony La Russa brings in Codi Heuer.

Walsh crushes a 2-0 fastball for a solo home run and the Angels lead 4-3.

Upton singles to left, but Heuer gets a fly out from Iglesias to left to end the fifth inning.

Robert gets on base thanks to an infield single.

Lagares grounds out to Garcia.

Stassi gets on base with a single to center.

Fletcher with a sac-bunt, advances Stassi to second.

Pujols pinch-hits and grounds out to Moncada to end the sixth.

A leadoff single for Garcia and he steals second base with Eaton at the plate.

Eaton makes a productive out, moving Garcia to third with a groundout to second.

Moncada grounds out to second and the White Sox fail to bring in Garcia from third with less than two outs.

Aaron Bummer comes in for the White Sox.

Rendon lines out to Eaton in right field.

Upton is hit by a pitch that was almost a swinging strike 3.

Iglesias grounds out to first to end things for the Angels.

Mercedes called out at first base on a slow roller to Rendon, but the video review clearly shows he beat the throw. Call reversed.

Hamilton flies out to center on the first pitch he sees.

Right-hander José Ruiz in to pitch for the Sox.

Iglesias hits Madrigal on a 2-2 change up that got away from him.

Garcia bunts and Iglesias nearly throws the ball down the right-field line. Madrigal goes to second.

Eaton grounds the ball back to Iglesias, who this time does throw the ball away trying to get Madrigal in a rundown between second and third. Madrigal scores to tie the game and Eaton ends up at second.

Mercedes with a pop-fly to shallow center.

Ruiz starts the ninth for the Sox and allows a single to Fowler. La Russa brings in Matt Foster.

Trout once again strikes out swinging against Foster.

Heartbreaker. Walsh ends it with a walk-off homer. Robert was so close.

White Sox with another underwhelming effort and they lose 3-of-4 against the Angels. Oh and Tim Anderson has a banged up hamstring, too. Next up is a three-game series against the Mariners in Seattle starting Monday night.