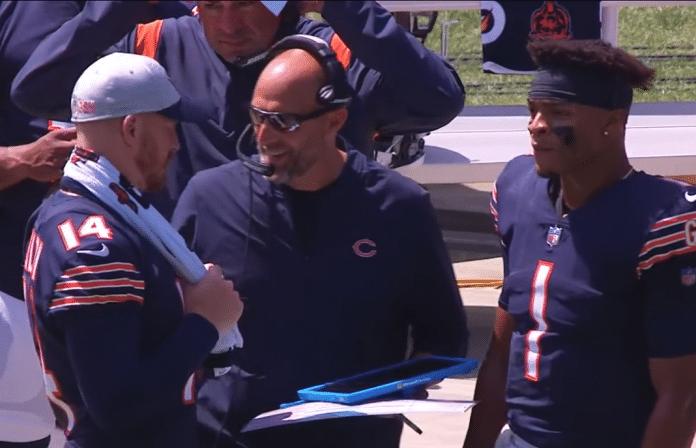 Matt Nagy doesn’t have a lot of supporters outside Halas Hall. Especially in regards to his handling of the quarterback situation. Many people, fans and experts alike, can’t understand why he insists on this “plan” he has to start Andy Dalton and sit Justin Fields. Especially when the rookie played so well in the preseason and showed significant improvement throughout August. By all sense of logic, one would say he did more than enough to earn an opportunity to start.

It turns out those people aren’t the only ones feeling this way. A source reached out to SM stating there are rumblings inside the Bears locker room. Several people don’t understand why Nagy is being so stubborn. They think Fields is ready and clearly the better option of the two quarterbacks. That isn’t out of disrespect to Dalton. Merely a belief that Fields gives them a better chance to win.

This is exactly the problem some warned would happen.

Former cornerback DeAngelo Hall said on NFL Network that Nagy risked dividing the locker room by holding Fields back. Everybody saw what happened in the preseason. They saw the athleticism, the arm talent, and the poise under pressure. His leadership is already showing up in every practice. Having a plan with Dalton is nice and all. It probably doesn’t resonate with many of the older players on the roster.

Guys who may not be around much longer and are trying to compete for a championship now. Dalton is a solid veteran, but everybody knows who he is. He might get you 10 wins in the regular season and then will do nothing for you in the playoffs. The goal for this team isn’t just to reach the postseason. It is to win in the postseason. Rookie or not, Fields is the best option for this team if that is the goal. The locker room seems to know it.

Nagy knows his Justin Fields plan hinges on one thing

That is Dalton playing well. He has insisted up and down for over a month that the 33-year old has looked good since joining the team. The preseason was an unfair measuring stick for where he’s really at. He didn’t have the entire starting offensive line or any of the starting offensive weapons during most of his time on the field. That will change when the actual games kick off starting this Sunday.

Handling the fans and media is one thing. Nagy might not be able to handle a locker room fracture as well. For now, players are willing to go along with his assurances that Dalton will do fine. The veteran’s leadership has helped in that regard. However, if he doesn’t deliver in games, then the grumbling about Justin Fields will only get louder. Teams have been torn apart by these kinds of problems before.

Considering how hot Nagy’s seat appears to be?

This feels like a dangerous gamble. His plan has merits. There are plenty of examples of young QBs sitting early and playing well when they finally get their chance. However, the nature of the modern NFL doesn’t allow for patience like it used to. Not just because examples exist of rookie QBs doing better than ever but also because their contracts offer only a limited window to invest heavily in the surrounding roster. Nagy better hope this work.