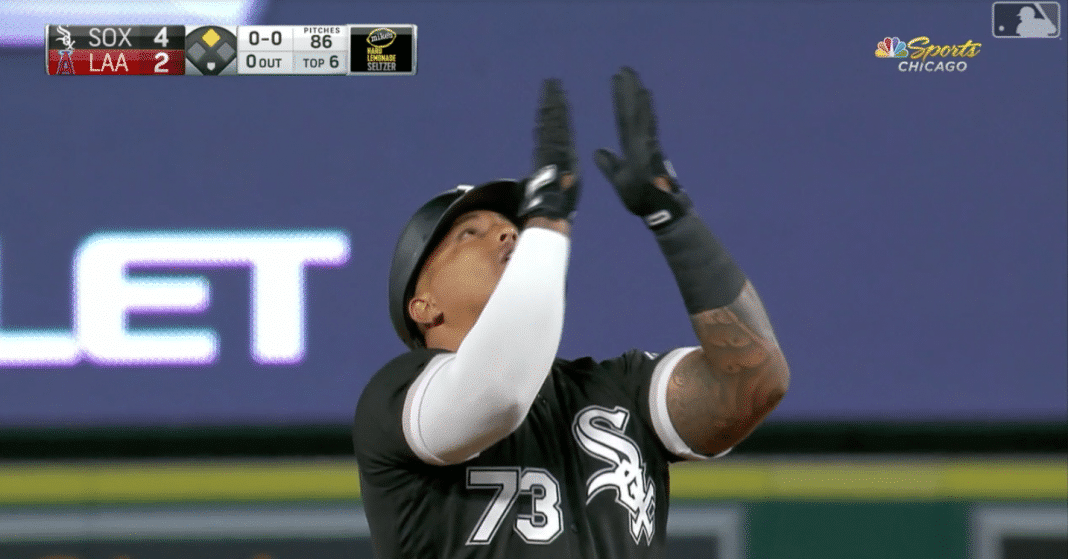 Tim Anderson strikes out swinging on a splitter from Alex Cobb.

Adam Eaton off to a great start at the plate against the Angels, lines a single to center.

José Abreu got ahead 2-0, but can’t do much with an inside pitch and grounds into an inning-ending 6-4-3 double play.

David Fletcher with a leadoff single to left on a 1-2 pitch from Lynn.

Shohei Ohtani strikes out swinging on a fastball.

Holy shit what a brutal no-call. Lynn had Mike Trout struck out, but the ump misses a call on the 0-2 pitch. Trout ends up walking.

Lynn freezes Anthony Rendon on a cutter for strike 3.

Jared Walsh cranks a ball to center, but Luis Robert tracks it down to end the first.

A 27-pitch inning for Lynn caused by that missed strike 3 call on Trout.

Yoan Moncada grounds out to Walsh at first.

Zack Collins lines out to the second baseman Fletcher.

YERMIN MERCEDES WITH A HOME RUN!

Luis Robert strikes out swinging to end the second.

Justin Upton flies out to right and Eaton once again not looking too comfortable making the play. He completely missed one last night that cost the team two runs.

Kurt Suzuki reaches on an infield single. TA’s throw was low to first and Abreu couldn’t dig it out of the dirt.

Dexter Fowler pops up to Moncada behind the mound.

Andrew Vaughn chops one to Iglesias, who throws him out.

Anderson keeps the inning alive with an infield single. Rendon made a nice play on a slow chopper, but TA’s speed made it an easy hit for him.

Another hit for Eaton. He’s hot. Anderson to third and Abreu comes up with runners on the corners.

Iglesias makes another pretty play up the middle, tosses it to second for the force to end the top half of the second.

Fletcher chops one in front of the plate and Collins can’t get a hold of it. Fletcher with an infield hit.

Ohtani pops up to shallow left, where Anderson makes the catch.

Lynn doesn’t leave it up to the ump this time, fastball inner half and Trout strikes out swinging.

Yikes. The bad defense is spreading to Luis Robert now. Ball bounces off his glove and then head after calling off Anderson. Fletcher scores from first to tie the game.

The bad defense is spreading to Luis Robert #WhiteSox pic.twitter.com/cn0x0X98et

And now an infield hit to shortstop for Walsh, Rendon scores and it’s 2-1 Angels.

Luis Robert singles to left and he gets one run back, Collins scores to tie the game.

Vaughn strikes out swinging on a splitter.

Garcia grounds out to end the inning.

Iglesias with a hit to start the fourth, but no harm done as Suzuki grounds into a 5-4-3 double play.

Lynn falls behind 3-0 to Fowler, but he comes back to get the outfielder on a slow roller to Abreu. Lynn with 82 pitches through four innings.

Anderson grounds out to Cobb.

Another come backer to Cobb, Eaton is retired.

Cobb strikes out Abreu on a curve ball in the dirt.

Fletcher with an easy pop-fly to Eaton in shallow right-center field.

Ohtani dumps a single to right.

Lynn blows Trout away with another fastball. Gotta love Lynn challenging hitters with his best stuff.

Oh shit! Lynn doesn’t get the call on the outside corner and Rendon walks.

Crochet spikes one that gets past Collins. Runners go to second and third.

Nasty slider from Crochet to get Walsh swinging for strike 3.

Collins takes advantage of a 0-2 mistake and rifles a single to right. Sets the table for Yermin!

He just set another record.

From Elias: Mercedes is 1st player in modern era (since 1900) to begin a season with 8 straight hits

Robert pops up for the first out. Runners stay at second and third.

Garcia grounds out to Cobb and the Sox can’t get another run after having two on in scoring position with no outs after the Mercedes double.

Upton grounds out to Moncada on the first pitch and Iglesias flies out to Eaton on two pitches.

Crochet strikes out Suzuki and he makes very easy work of the Angels in the sixth.

Left-hander Tony Watson is in for the Angels.

Anderson and Eaton both bounce out to Rendon at third.

Moncada with a come backer to Watson.

Fowler with a fly ball to right field.

Fletcher grounds out to first.

Ohtani strikes out swinging on another pitch in the dirt. Crochet looked awesome out there in his season debut.

Watson still in and Collins strikes out swinging.

The Angels finally get Mercedes out. He flies out to Trout in center.

Robert bloops a single to center.

Hamilton strikes out swinging to end the eighth for the Sox.

Evan Marshall in to face the heart of the Angels’ lineup.

Marshall fools Trout, catches him looking with a high curve ball for strike 3.

Walsh smokes an RBI-triple down the right-field line, ties the game at three.

Infield comes in with Upton at the plate and Walsh at third representing the go-ahead run.

Upton drills a two-run homer to left. Just like that, Angels lead 5-3.

Iglesias flies out to right field.

Suzuki strikes out looking to end the eighth.

Guerra still pitching for the Angels to begin the ninth.

Garcia strikes out swinging. Rough start for him.

Anderson grounds out to Iglesias.

Eaton with another great plate appearance, draws the walk and Abreu comes up with a chance to tie it.

Abreu crushes one on the ground, but Iglesias fields it and gets the out at second.