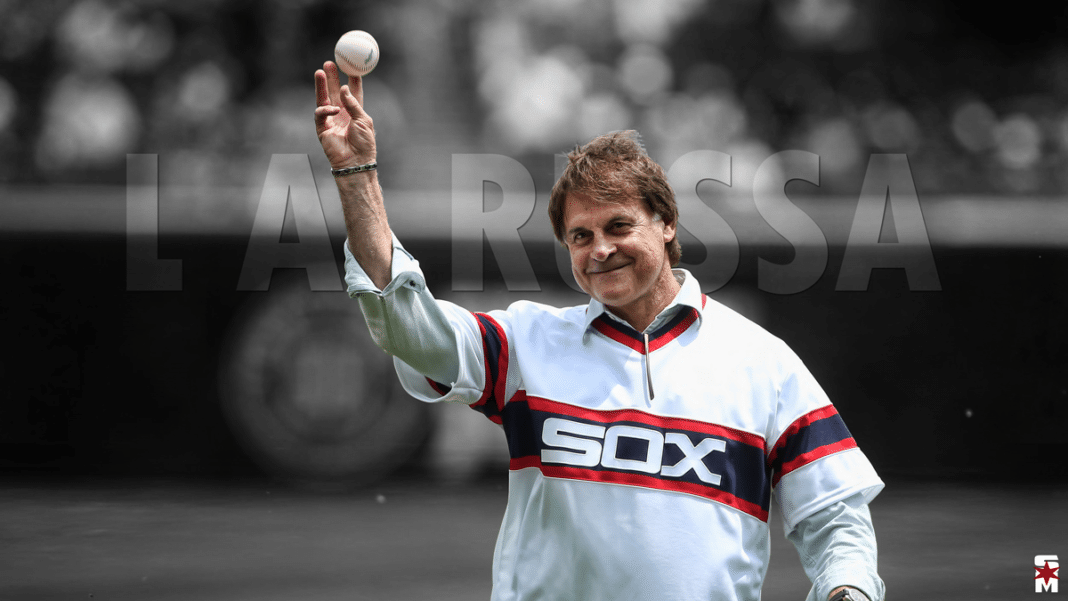 The Chicago White Sox wrapped up the first half of the 2021 season with a thrilling extra-innings victory on Sunday over the Baltimore Orioles. Chicago heads into the All-Star break with an eight-game lead in the American League Central Division and have won 54 games this season. Manager Tony La Russa has been the most controversial figure on the White Sox this season, and despite a rough start, he now could be in a position to win the American League Manager of the Year award depending on how the season ends.

When the White Sox hired La Russa as their new manager in October of 2020, the news was received with harsh backlash from analysts and fans. Many believed that the 76-year old manager was too old to oversee a young team ready for a championship run. Furthermore, his time away from the game was a significant concern as he had not managed since 2011.

.@dan_bernstein is going to be fired up — and not in a good way — if the White Sox hire Tony La Russa.

We know that because he was fired up about the situation this morning in transition with @leilarahimi @mullyhaugh @DavidHaugh.https://t.co/32ks3c3yxw pic.twitter.com/CptWzYvv1e

Although the team played well to start the season, La Russa made several managerial mistakes early on, seemingly solidifying the objections that fans and baseball minds with the managerial hire. The Hall of Fame manager cost the White Sox several games in April due to poor bullpen management or not knowing when to pull his starter soon enough. The April 27th loss to the Detroit Tigers saw La Russa leave team ace Lucas Giolito in for far too long, leading to a Tigers’ three-run seventh inning.

The most embarrassing loss came a week later against the Cincinnati Reds when the White Sox manager did not know an extra-inning base-runner rule. La Russa, in a 1-1 tied game in the 10th inning, had closer Liam Hendriks as the extra-innings runner on second base when the rule allowed for a substitute runner since Hendriks was the pitcher. Although Chicago’s closer did not make a base-running mistake, it still was troubling that a Hall of Fame manager was unaware of a rule.

#WhiteSox manager Tony La Russa has indicated he didn't know that extra innings rules allowed him to substitute the pitcher with the man preceding him in the lineup as the man on 2B to start the 10th inning. A nuance of the new rules, and he was unaware. His team lost 1-0.

La Russa dealt with controversy that made national headlines when he got made at White Sox designated hitter Yermin Mercedes when Mercedes ignored a take sign on a 3-0 count and hit a home run off a position player in a 16-4 victory over the Minnesota Twins. Although he was more upset with Mercedes ignoring a take-sign given by third base coach Joe McEwing, his messaging to the media appeared that he was angry with his player for showing up the Twins in a blow-out win. Many wondered if La Russa was on the verge of losing the faith of the White Sox players at that moment.

Lucas Giolito asked if there is any negativity in the clubhouse following the Tony La Russa and Yermín Mercedes situation the last couple days:

"No negativity. We all support Yermín. We love home runs here. That's it. We're going to move on."

One of the more impressive aspects of La Russa’s job as manager this season has been the overcoming of massive injuries to important players. Nearly two-thirds of the White Sox projected lineup this season has missed at least a month or more of games due to significant injuries. Chicago has been without outfielders Eloy Jimenez, Adam Engel, and Luis Robert for the majority of the season. Jimenez, who tore his pectoral muscle in spring training, is expected to make his 2021 season debut with the White Sox in the next two weeks. The team lost starting second baseman Nick Madrigal for the season back in Mid-June due to a torn hamstring and lost starting catcher Yasmani Grandal to a torn knee tendon last week.

"Everybody's really concerned about him. There's crutches in there. … Just really uncertain what the diagnosis is really going to be. … Hope for the best, that's all I can tell you right now. … It wasn't a cramp. I wish it was a cramp."

Despite the injuries, La Russa has put together a quality lineup night after night, mixing in journeymen veterans and players called up from Triple-A Charlotte. Veterans like Billy Hamilton, Brian Goodwin, and Jake Lamb have provided both a defensive and offensive spark for a team without their stars. Despite the injuries to the lineup, the White Sox starting rotation has been consistently good throughout the season, while the bullpen has been better over the last few weeks.

It is remarkable that as the injuries have piled up, the spirit of the white sox players to overcome the setbacks has grown. Since Grandal’s injury last Monday, Chicago has been on a five-game winning streak. Players that do not care for their manager do not play as hard, which will usually lead to losses piling up. The opposite is currently taking place for the White Sox and La Russa, as the team is now a season-high 19 games above .500.

That is nearly half their starting lineup.

Yet they are still in first place in the AL Central (6 games ahead of CLE).

If the White Sox have a big second half of the season that results in a division championship followed by a deep playoff run, there is a very good chance La Russa is named Manager of the Year. The amount of injuries the team has had to overcome so far this year, along with the improvements that have been by the White Sox manager when it comes to bullpen management, is something that needs to be recognized. Most importantly, La Russa may be deserving of the award because he has proven that he can adapt to the present.