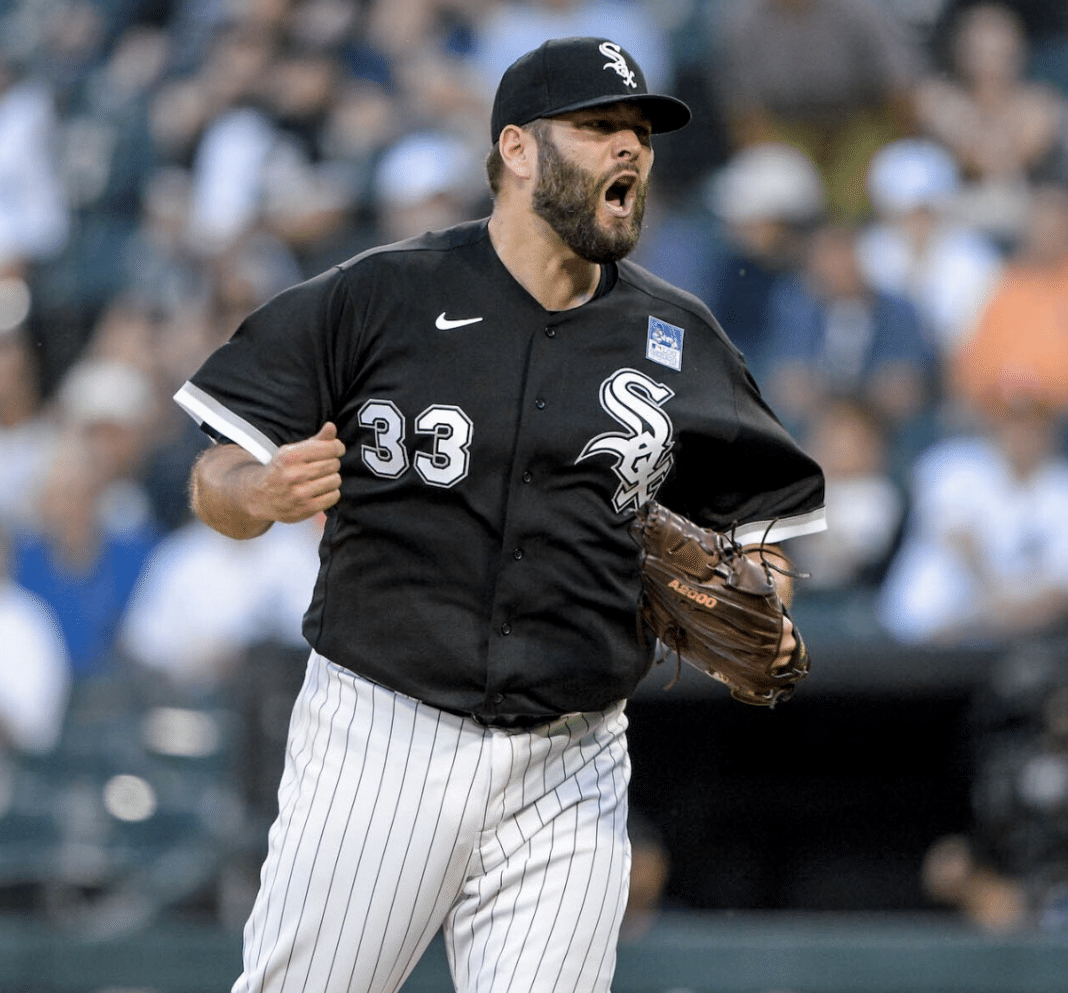 Lance Lynn glared in at Mike Zunino as he prepared to uncork his 103rd pitch of the night. It had been a battle all night for the big right-hander out of Mississippi. The Tampa Bay Rays had ambushed him early for three runs and, his command had eluded him at times. Despite the challenges, he was only one pitch away from a quality start.

Lynn kicked and fired a 94 mph cutter at the top of the strike zone. Zunino swung and missed for Lynn’s eighth strikeout of the night. As he has done all year after a big strikeout, Lynn turned towards centerfield and let out a massive yell followed by an emphatic fist pump and obscenities for good measure. This is the Lance Lynn experience.

Nobody pitches with the mannerisms, body language, conviction, and approach quite like Lance Lynn. His presence is starting to rub off on his teammates.

Back in April Lance Lynn issued a challenge to the rest of the Chicago White Sox starting rotation. The starters had been struggling to go deep into games and the bullpen was taxed. It was April 8th and a starting pitcher had yet to make it through six innings for the White Sox. So Lynn decided to take matters into his own hands, tossing a complete game shutout during the White Sox home opener against the Kansas City Royals.

In the process, he became the first pitcher in American League history to throw a shutout with 10-plus strikeouts and no walks in a team’s home opener.

“The first time and first half of the rotation, we haven’t done what we’re expected to do and capable of,” Lynn said after his dominating performance. “So we’ve been talking about it.”

The White Sox starting rotation has since responded by posting the second-best ERA in baseball. Lance Lynn and Carlos Rodón have the first and second-best ERA’s in the American League. Carlos Rodón, Lucas Gioltio, and Dylan Cease each rank in the top-10 in strikeouts. The rotation has a competitive feel, with each starter trying to outdo the other. Lance Lynn was the one to set the tone.

The White Sox traded for Lance Lynn to serve as a workhorse that could put the team on his back. In 2020 he led American League pitchers in innings, pitches per game, and games started. He has thrown 200 plus inning three times in his career, made 30 plus starts five times, and has struck out, 150 batters seven times. He has also finished among the Top 10 in the AL Cy-Young Award voting, each of the last two seasons. Lynn has been so durable that Dallas Keuchel gave him the nickname “Tonka Truck” during spring training.

Lynn has been as advertised this season as well. His 1.51 ERA is currently the third-best ERA in the MLB. He leads the White Sox in wins and quality starts and has yet to give up more than three runs this season.

When the White Sox needed someone to stop the bleeding after being swept by the New York Yankees, Lance Lynn played the role of stopgap against his former team, the St Louis Cardinals. Lynn won the World Series with the St. Louis Cardinals in 2011 as a rookie with Tony La Russa. He had no interest in a friendly reunion. The husky righty tossed seven innings of one-run ball and called the victory “one of the most satisfying wins” he has ever had in his career.

What’s the secret to his success? He is a bully on the mound.

“I’ve always been an asshole,” Lynn told reporters on May 24th when he asked about his mentality when he takes the hill.

Lance Lynn likes to impose his will when he is on the mound. He will throw his hand up casually, like he just hit a three-pointer, after striking a hitter out. Or he will turn around and do a little nut grab as he kicks up some dirt. After striking out Freddy Galvis of the Orioles he was not shy about letting everyone know how he felt, calling Galvis a “slap dick motherfucker” as he strutted off the mound. He pitches with emotion and wears his heart on his sleeve.

Teammates are beginning to follow his lead. After recording a big strikeout in the seventh inning in a game against the Toronto Blue Jays, the usually reserved Evan Marshall had a burst of emotion. Marshall did his best Lance Lynn impression before walking towards the dugout. He even acknowledged Lynn’s influence after the game on Twitter.

You're crazy if you think Lance Lynn doesn't have added value as a clubhouse guy #beauty https://t.co/VV6gMgQqby

What separates Lynn from other pitchers is that he is also fearless. Lance Lynn challenges hitters with his fastball. He throws it right over the heart of the plate and dares hitters to make contact. Usually, they can’t.

Lance Lynn throws 88 percent fastballs. Mike Trout is the best hitter in baseball. He crushes fastballs, in 2020 he had a .302 batting average against fastballs and just a 13.9 percent whiff rate. So what did Lance Lynn do when he faced Mike Trout? Attack him with fastballs. On an 0-2 count in the third inning, Lynn threw Trout a 96 mph four-seam fastball middle-middle that Trout proceeded to swing and miss at.

While facing the best team in the American League, the Tampa Bay Rays, in typical Lance Lynn fashion, he challenged hitters with his fastball. In the first inning, he struck out Ji-Man Choi looking with a four-seam fastball over the plate. He the fourth inning he threw a “FU” fastball right down the middle and got Kevin Kiermaier to swing and miss. Later in the fourth, he challenged Brett Phillips with a 3-2 fastball and got him to fan at it.

Simply put, Lance Lynn doesn’t care who is in the box. He has a chance to win the AL Cy-Young Award and guide the White Sox to their first playoff series victory since 2005. When he hits free agency this offseason the White Sox should be the first team in line to pay him.

The big trash-talking, f-bomb dropping, fastball throwing right-handers fingerprints are all over the White Sox success this season.