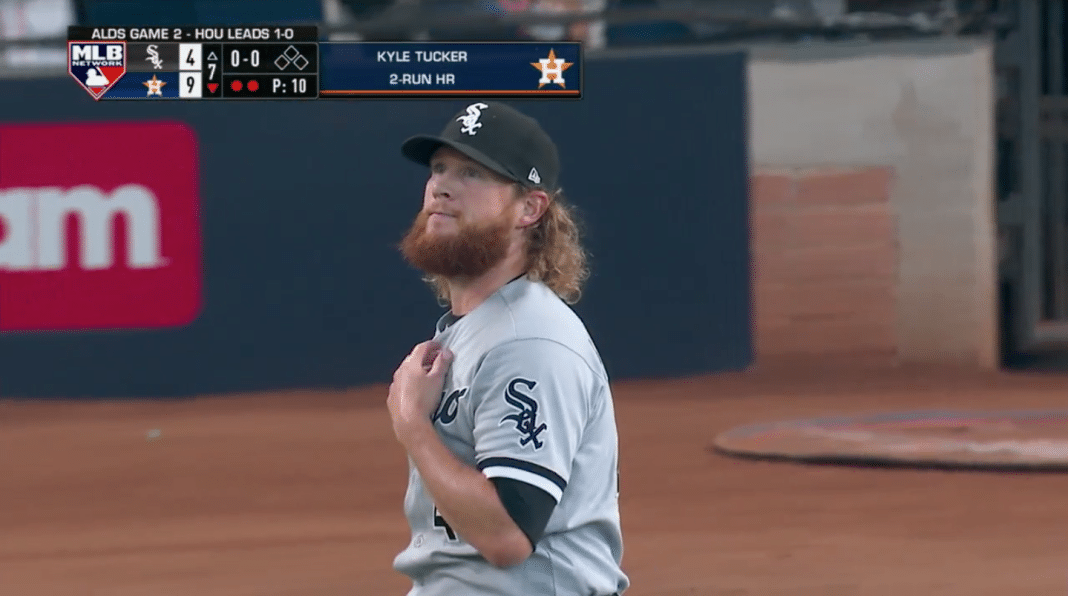 The White Sox were already trailing the Astros 5-4 when Tony La Russa brought in Craig Kimbrel to get out of the seventh inning, but the former Cubs’ closer couldn’t shut the door and Houston broke the game wide open with a pair of big hits.

The damage came with two outs as Carlos Correa hit a line drive over the head of Leury Garcia in right field that scored two runs. Then, left-handed batter Kyle Tucker blasted a two-run home run to left field, giving the Astros a 9-4 advantage in the seventh.

Anderson hits a ground ball up the middle, where Correa makes a great play ranging to his left and makes an unbalanced throw for the out.

Robert jumps on a 2-0 pitch and lines a single to center field.

Abreu singles through the right side of the infield. Robert stops at second base.

Grandal gets hit on the foot by a curveball to load the bases.

Jimenez hits a grounder to Altuve, who makes a diving stop and gets the force out at second base. Robert scores and the White Sox take a 1-0 lead. Abreu goes to third base.

Moncada strikes out swinging on a curveball in the dirt.

Giolito strikes out Altuve swinging with a breaking ball low and away.

Giolito strikes out Bregman swinging with a fastball.

A dominant first inning from Giolito, who throws 16 pitches in the opening frame.

Vaughn strikes out swinging on a curveball.

Valdez has the curveball working, Garcia strikes out swinging.

Valdez strikes out the side swinging. Engel can’t check his swing on a curveball in the dirt.

Alvarez works an eight-pitch walk that came after Moncada slid into the side wall legs-first, as he ranged from the shift into foul territory trying to make a catch. Trainer came out, but Moncada stays in the game.

Gurriel grounds into a fielder’s choice. Garcia gets Alvarez out at second base.

Correa works the second full count of the inning and draws a walk.

Tucker beats the shift and singles to left-center field. Gurriel scores and the Astros tie the game 1-1.

First delivery to McCormick is a wild pitch and runners move to second and third.

McCormick hits a sac-fly to left field. Correa scores and Tucker advances to third base. Astros take a 2-1 lead.

Maldonado swings at the first pitch and sends a drive to deep right field, but Engel makes a running catch on the warning track.

Anderson hits a ground ball to shortstop, Correa fields it in the hole but Anderson beats out the throw.

Abreu strikes out swinging. Valdez using his curveball to get several of whiffs low and inside against Chicago’s right-handed batters.

Grandal taps one back to the mound and Valdez starts a 1-6-3 double play to end the inning.

Altuve with a slow grounder to Moncada, who makes the play for the out.

Brantley lines a ball to the right of Robert, who has it bounce a few feet away after looking like he wanted to dive and allows Brantley to have a double.

Bregman singles to right and Brantley stops at third base.

Alvarez swings at the first pitch and fouls out to Grandal.

Gurriel swings at the first pitch too and he flies out to left.

Giolito only throws 14 pitches in the third, 52 total.

Gurriel makes a great play on a smash from Moncada, steps on first and tags Jimenez for the double play.

A nine-pitch inning for Valdez, 54 total.

Correa strikes out swinging on a changeup.

Tucker fouls out to Grandal.

McCormick with a two-out walk.

Maldonado flies out to right field on a 3-1 pitch.

No damage done, but a 25-pitch inning for Giolito, 77 total.

Garcia hits a grounder that can’t be fielded by Correa and it’s a single.

Engel lines out to Bregman at third.

Anders with a line-drive single to center.

Robert bangs an RBI-single to left. Anderson goes to third and the White Sox tie the game 2-2.

Valdez is taken out for right-handed pitcher Yimi Garcia.

Abreu with a single to center. Anderson scores and the White Sox take a 3-2 lead.

A tight ballgame in Houston!

Wild pitch gets runners to second and third.

Bregman takes a close pitch on a full count for a ball and walks.

Garrett Crochet comes in to pitch.

Alvarez lays off on a ball in the dirt, walks and the bases are loaded.

Gurriel with a two-run single past a diving Anderson on a two-strike pitch. All tied up 4-4.

Moncada and Abreu make great plays on both ends for a 5-4 double play off the bat of Correa.

Vaughn hits a soft liner up the middle, but Altuve makes a diving catch for the out.

Tucker with a line drive to the left-center field gap, but Jimenez makes a good catch going down to the ground.

McCormick laces a single to right field on the first pitch.

Maldonado taps one back to Tepera, who starts a 1-4-3 double play.

Hernandez strikes out swinging on an inside fastball.

Robert stays hot and lines a single to left field.

Grandal lines a ball to right field, but Tucker races back, reaches up and makes the catch.

Bregman smashes a single off Bummer’s glove to center field. Altuve advances to third base.

Alvarez singles up the middle to drive in Altuve, Bregman stops at second base. The Astros take a 5-4 lead.

Gurriel flies out to right field.

McCormick popped out to first base.

Moncada grounds out to Bregman.

Liam Hendriks comes in to pitch.

Maldonado flies out to the warning track in right field.

Kendall Graveman comes in to pitch.

Anderson singles to right field. Hernandez stops at second base.

Robert grounded into a fielder’s choice. Runners advance to second and third.

Grandal fouls out to Tucker down the right-field line.