The Chicago Bulls have been a staple to American sports since their establishment in 1966. Although they’re most known for drafting Michael Jordan, the Bulls have another area that needs to be recognized: their historic jersey designs. There’s something that sparks within us Bulls fans when we read that “Chicago” cursive script across a red jerseycursive script across a red jersey, at least if you’re a true Bulls fan.

The Bulls debuted their brand new City Edition jerseys for the 21-22 season against the Heat this past Saturday night, and they are everything we could’ve dreamed about. Although the Bulls lost 107-104 in a close battle, the jerseys took a W.

These aren’t the first jerseys to win over fans, however. Remember when D-Rose rocked the Christmas edition jerseys, or the time the Bulls debuted their black pinstripe jerseys? The Bulls are known for their classic unis, but the special edition jerseys are starting to take more notice. Whichever jersey stands out to you when you think of the Bulls is special, and everyone has a reason as to why one stands out more than another.

Whatever the case may be, the Bulls have always had some historic uniforms. Now, let’s take a look at the top 3 since their establishment.

Although these jerseys only made the cut for a short stint, they left an impact on Bulls fans for the rest of eternity. The jersey seemed to be classic when it was a plain black jersey, but the addition of the red pinstripes asserts a sense of dominance. The organization kept the classic font for the team name and numbers, but it seems like such a different jersey with the pinstripes for some reason.

Bulls fans are sure to think of the 90s when it comes to these all-time favorites, and nostalgia probably runs rampant for a certain era of fans.

Yes, the most basic jersey of them all. It’s just a plain, white jersey…right? No, it runs deeper than that for Bulls fans. There’s something that clicks when you look at these. Is it the fact that these have been around since the start? Is it because they’ve been there when we’ve won every title? Who knows, but a switch certainly flips when we take a look at these.

The team who designed these jerseys truly kept it as simple as they could, yet put so much thought into them. The classic font on both sides of the jersey is so easy to read that even people sitting in the nosebleeds of the United Center can read them. Okay, maybe that’s a bit of a stretch, but you get the point.

These jerseys have been the classic of all classic jerseys when thinking of the Bulls and the NBA in general. 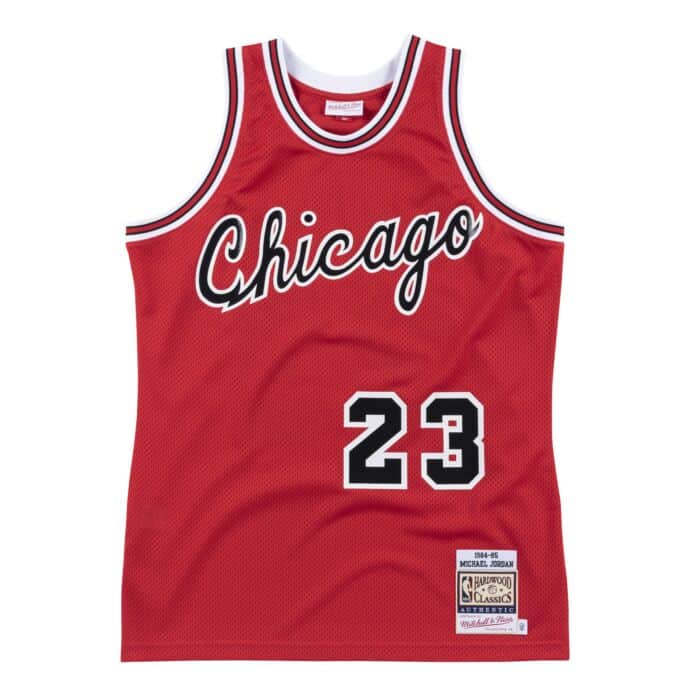 This jersey pops into many minds when people think of Michael Jordan and the Chicago Bulls in general. It’s crazy how such a subtle change in design can lead to such an impact on the way a jersey looks. The “Chicago” script on the front is what sets this jersey apart from the others.

Not many jerseys are easy to read when they have a cursive font, but the design team mastered this one. The classic red jersey stands out by itself, and adding a unique font makes this jersey stand out even more. The number underneath “Chicago” was the perfect spot to be placed, as it’s not too small and doesn’t take away from the other aspects of the jersey.

The back of the jersey goes back to the same outline that the other Bulls jerseys follow. This was a smart decision, as matching the font from the font for the name on the back would have made it very difficult to see.

Conclusion: The Bulls Understand How To Design

The Bulls have always been unique when it comes to jerseys, but they all spark a different memory for fans. No matter which one may be your favorite, they all hold a special place in our hearts. For now, let’s enjoy this team that continues to prove people wrong, all while rocking some of the sickest jerseys in the league.

Cleanest City Edition jerseys in the league, if we do say so ourselves. pic.twitter.com/YSXceIp0mi

The Bulls got blown out for the second game...
Chicago Bulls News

The Bulls have been riding high as of late....
Chicago Bulls News

Trading Coby White Would Be A Mistake

The final game of 2021 provided the Bulls with...
Chicago Bulls News

As we have just officially finished the first full...