Byron Pringle Blasts Media On Twitter For Asking About His Past

When making first impressions, Byron Pringle isn’t off to a great start. The Chicago Bears signed the veteran free agent in hopes he’d become a primary part of their retooled wide receiving corps alongside Darnell Mooney. Then mere weeks after his arrival, he gets busted down in Florida for doing donuts in his career on a local street with his son in the back seat. Getting arrested before playing a down on a new team isn’t what people want to see.

GM Ryan Poles said he spoke to the receiver after the incident and things were handled. He doesn’t expect another such occurrence. As for Pringle himself? He had to have known he’d be fielding questions about the incident when he stepped in front of the media. The man clearly did everything he could to avoid the subject, insisting everything was taken care of in-house.

When pressed on the subject, he made it clear he didn’t want to dwell on what had happened. He was focused on what was ahead for himself and the Bears’ offense.

“I always keep a smile on my face wherever I go. Keeping that positive energy. Coming here, we’re not worried about the past. We’re trying to go forward. We’re not looking back at what happened in the past. As a unit, we’re trying to be better and hold each other accountable.”

Well, it seems Pringle went back on that statement that same day. Shortly after his presser concluded, he fired off this tweet that was quickly deleted. Of course, by then, it was far too late. 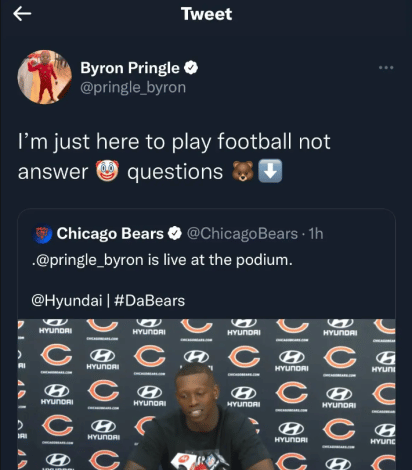 Pringle may not have liked the questions he had to answer from the media. Here’s the thing, though. That is part of the job. He should know the job description, having been in the NFL for five years. If you make a mistake off the field, you will be asked about it. The media has a job to do, which is to collect information. They wanted to get his side of the story.

Dodging the questions is okay. Plenty of players do it. However, to then go on social media and blast them for doing their jobs? Not a great look. It won’t make him many friends, especially if he doesn’t play well this season.

He has no idea what kind of pressure cooker he stepped into. With all due respect to the Chiefs’ beat, their coverage is like a country club compared to Chicago. This city can eat players alive if they make the mistake of alienating the media and fans without playing well on the field. Ask Cedric Benson or Milton Bradley, among many others. You’ll not survive long in this town if you don’t have thick skin.

It is probably a blessing in disguise that Byron Pringle signed a one-year contract. If the Bears had locked him in with a two or three-year deal, this has a chance to get ugly. The team is in the first year of a new offense with a young quarterback in Justin Fields trying to find his way. It is possible Pringle won’t experience the same success he did last year in Kansas City.

That won’t go over well with fans.

One can easily picture them giving him loads of heat towards the end of the season if things aren’t going well. Hopefully, it won’t come to that. It has happened too many times before not to notice the signs. Pringle needs to stay away from social media. There is no safety to be found. His best course of action is to be calm during interviews and focus on football. Lashing out won’t help anybody.

Is it because Pringle had potato chips named after him?

Leave the poor kid alone. I saw the interview, it was unnesasary. He did a couple of donuts inan empty parking lot. Big whoop!

Anybody standing up for what Pringle did is wrong. The guy was driving on a suspended license. When you disregard the law, you got no justification for your actions. Period. Great role model for the kid who was in the car. Be responsible man. Race had nothing to do with this…you’re supposed to let the guy? C’mon man, the cops were just doing their job.

Fascinating comparison — KC has a “country club” atmosphere relative to the press… and wins. The Chicago press is brutal and the Bears are woeful.

Ryan Pace made plenty of mistakes that resulted in the Chicago Bears going from an up-and-coming contender to rebuilding...

The talk around Justin Fields the entire offseason has centered on his supporting cast. His wide receivers are devoid...

Want Proof Jaquan Brisker Was Born To Be A Bear? Here You Go

The Chicago Bears had plenty of reasons they liked Jaquan Brisker going into the 2022 draft. He was a...

Why Justin Fields May Finally Crack The Elusive 4,000-Yard Barrier

It is a stat line that has almost become commonplace in today's NFL. Every franchise in the league has...

Adam Humphries Is Another WR Option Bears Are Urged To Sign

The wide receiver position is a constant talking point for the Chicago Bears. Many in the media consider it...

Jay Cutler Surprises Everyone With Recent Comments On Justin Fields

Jay Cutler has one of the most complicated legacies in the history of Chicago sports. On the one hand,...