Yermin Mercedes’s home run off of Williams Astudillo should have been a fun moment. Two big guys, nicknamed La Tortuga and the Yerminator, squaring off. Astudillo lobbed in a 47 mile an hour pitch and Mercedes crushed it to center field.

That’s all it should have been. A rookie sensation, pimping a home run off of a position player. Instead, we are talking about counts. Mercedes committed the heinous crime of swinging on a 3-0 count when the White Sox were up 15-4.

Astudillo was not happy. He glared at Mercedes while he rounded the bases and barked at him after the game as the White Sox were high-fiving. The Twins announcers were not happy either.

Imagine being a Twins fan and listening to these broadcasters dictate what’s acceptable pic.twitter.com/Dw8LpjYAR5

Yermin Mercedes has been the best hitter on the White Sox this season. He is first in on-base percentage, slugging percentage, and OPS. Mercedes trails only the reigning MVP in RBI’s. He is constantly saying the key to his success is to “be Yermin”.

Mercedes broke an unwritten rule. So what? The White Sox slogan is “Change The Game”. The next day Mercedes did not apologize.

He had nothing to apologize for. After this season, he will head into arbitration looking to get paid more. Adding an extra home run to his statistics will help. Mercedes also leads the league in batting average. He is competing for a batting title. If you don’t want him to get a hit then don’t put in a guy that is throwing beach balls.

Tony La Russa was asked about the situation during his pregame press conference. He had a chance to defend his player instead he said this.

“Big mistake. Just about the time the guy started making the pitch, I took several steps from the dugout onto the field, yelling, ‘Take, take, take!’ Just the way he was set up, it looked to me like he was going to swing. And the whole time he was running the bases, I’m out there and I’m (looking at him angrily). I was upset because that’s not a time to swing 3-0.

There’ll be a consequence that he has to endure here within our family. But it won’t happen again. Because Joe will be on the lookout, and I will be, too, and we’ll go running in front of the pitcher if we have to.”

Any credibility Tony La Russa had in the locker room is now gone. Tim Anderson and Mercedes took to Instagram to give their manager the proverbial middle finger after the game. 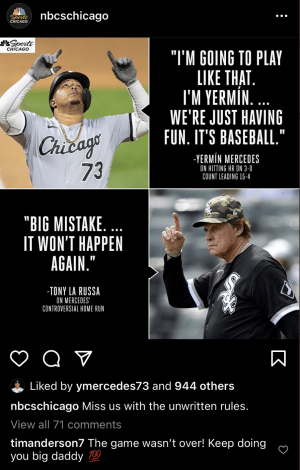 Tony La Russa’s sentiment comes as a surprise. Yes, Mercedes missed a sign but it seems strange to punish him when he missed a rule. La Russa even attacked Mercedes ‘I’m Yermin’ defense.

“I heard he said something like, ‘I play my game.’ No, he doesn’t,” La Russa said. “He plays the game of Major League Baseball, respects the game, respects the opponents. And he’s got to respect the signs. When he gets the take sign, he takes. … It’s a learning experience.”

Old school and new school are now colliding. By opening his mouth La Russa has opened pandora’s box and created a potential locker room rift. Mercedes is a reason the White Sox have won games. La Russa is responsible for multiple losses.

Tim Anderson preaches a killer mentality before the season. La Russa apologized to a division rival. The national media and players all sided with Mercedes.

Dear hitters: If you hit a 3-0 homer off me, I will not consider it a crime.

Dear people who are still mad about a hitter hitting: kindly get out of the game.

Can’t believe we’re still talking about 3-0 swings. If you don’t like it, managers or pitchers, just be better.

He made the mistake of being awesome. https://t.co/hlpn6mOonm

This just another installment of Tony La Russa embarrassing the White Sox.

There Is Deep Divide In White Sox Organization Over La Russa

The White Sox announced that Tony La Russa will not return for the remainder of the 2022 season after...

On Sunday, the Cleveland Guardians shocked the baseball world, clinching their first American League Central crown since 2018.Before the...

The status of Tony La Russa is a story that has been hovering around the Chicago White Sox for...

There were a lot of disappointed people leaving Guaranteed Rate Field on Tuesday night. But it was hard to...

After taking two of three in Detroit, the stage is set for a massive series in Chicago that could...

When you think of baseball's best duos, names like Babe Ruth and Lou Gehrig, Johnny Bench and Pete Rose,...

The White Sox playoff chances took a hit on Saturday afternoon when the White Sox announced that Michael Kopech...