Willson Contreras turned 30 on Friday and yesterday he hit his 100th home run with the Cubs.  Contreras became the 25th Cub with 100 home runs and the third catcher to do so.

Willson led off the game with a double and scored the first run on Ian Happ’s base hit.  After the Cubs batted around, Contreras got a hanging curveball from Bryse Wilson and deposited it in the left-field bleachers.  His 5th home run this season helped propel the Cubs to their third win in a row.

Willson became the 25th player in Cubs history to hit 100 home runs with the team.  Currently, he is tied with Keith Moreland who played for the Cubs from 1982 to 1987.  Moreland played 65 games at catcher in those six seasons before being traded for Rich Gossage in the offseason.  2 other Cubs catchers have hit more home runs, Gabby Hartnett and Jody Davis.

Hartnett made 6 All-Star games, won MVP in 1935, and was inducted into the Hall of Fame in 1955.  231 home runs are still good for #8 all-time in Cubs history, behind Aramis Ramirez with 239.  Here is a clip of Hartnett catching against Detroit in the 1935 World Series.

1983 saw him hit 24 home runs which were his single-season best.  1984 was the team’s most successful year with Davis at catcher.  The Cubs finished with a record of 96-65 and lost to the Padres in the NLCS.

Davis was traded to Atlanta in 1988 where he struggled.  He left the Cubs with 122 career home runs, good for 20th all-time, one more than Kyle Schwarber’s 121.  Here, Harry Caray calls another Cubs catcher’s grand slam, this one effectively ended the Mets’ 1984 season.

That 2019 season saw Contreras make his second All-Star team and finish with a career-high 24 home runs.  Contreras has also lowered strikeouts and increased his walk rate, with 24 and 14 respectively.  This 1.71 K/BB ratio is his best since 2017 when the rate was 2.18.

In the 29 appearances this season, Contreras has been the designated hitter in seven of those games.  Yan Gomes offering a solid backup catching presence has allowed Contreras to rest a little more and this could be the reason why we are seeing an offensive resurgence from Willson.  Contreras has also taken over the hit-by-pitch responsibilities from Rizzo, he leads Major League Baseball with 6 this season.

It would be criminal to not extend Contreras’ contract.  Not only has he been an instrumental part in each of the past two season’s success, but he is also having the best season of his career as we speak.  Willson has always been good, and he is getting even better.

The Cubs only have one catching prospect under 26 years old (Miguel Amaya) and are unlikely to find a major leaguer better than Contreras.

A bird in the hand is worth two in the bush and we have a great bird in Willson, hopefully, the front office sees it the same way. 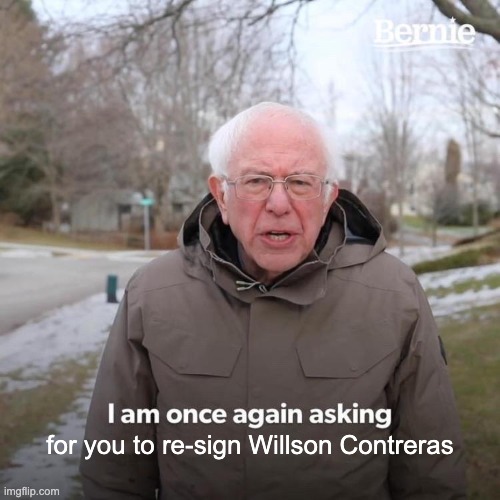 Christopher Morel has been a fun bolt of energy that Cubs fans desperately needed injected into the 2022 season....

July begins tomorrow as Cubs fans turn their attention to the Fourth of July, barbecues, and fireworks. Chicago Cubs...

The Chicago Cubs do not have as many good pitchers to trade this deadline as they would have hoped...

Keegan Thompson With A Great Start In Loss to Reds

Keegan Thompson continued to demonstrate that he deserves a spot in the Cubs' rotation for years to come. Although the Cubs dropped a game to the Reds 5-3 last night, the story was Thompson's pitching.

It has been a brutal year for injuries up and down the Cubs organization. The latest is a huge...

Top Cubs Trade Candidates, Who Stays And Who Goes?

After shipping off Craig Kimbrell, Anthony Rizzo, Javy Baez, and Kris Bryant in succession before last year's trade deadline, everything is on the table. So who will be the first to go?

Cubs Arms Renaissance: All-Star Potential With A Side Of Inconsistency