What’s Kyle Schwarber’s favorite attack? The throat punch and someone at Kris Bryant’s wedding earlier in January almost found out what it feels like to take a fist to the throat from the Chicago Cubs‘ beast.

As you probably already know, the 2016 MVP Kris Bryant got married and apparently hired the secret service for his wedding. Schwarber was on The Waddle And Silvy Show last Friday on ESPN 1000 and shared a quick story about how he and a few other players had a bit of trouble getting into Bryant’s wedding.

The gist of the story is Schwarber showed up along with Travis Wood and John Lackey and the person in charge of keeping Bryant’s wedding on the down low was being extra vigilant because he wouldn’t let them in at first.

It wasn’t until either Wood’s or Lackey’s wife showed the wedding invitation that they were finally allowed in.

Poor guy. Simply doing his job almost cost him a beat down from Schwarber. 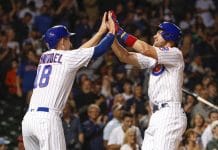