Out of the Cubs core position players that helped the franchise win their first World Series championship since 1908 by defeating the Cleveland Indians in 2016, Willson Contreras is the last man standing, but for how much longer? Well, there’s also Jason Heyward, but you know, we’re talking about guys who still have value.

Anyway, after the Cubs traded away Kris Bryant, Anthony Rizzo and Javier Báez back in July there was pretty much a consensus among fans that Contreras would be the new centerpiece that the team would build around or at the least be viewed as the new team leader. Most fans assumed a contract extension would be worked out some time during this offseason, but so far there hasn’t been a whisper about any talks between Contreras and the Cubs.

Not only that, but the only concrete report we’ve seen is that the two sides have not had any discussions about an extension whatsoever this offseason as of this past Monday.

Whether they want to punt on next season *or* make some key additions, they (and perhaps some of their free agent targets) need to know if Willson Contreras will be sitting behind the plate.

Note, however, that the post was premised on the fact that we hadn’t yet heard of any potential Contreras extension talks. It was at least possible, albeit unlikely, that those conversations were going on behind the scenes with tight lips all around. However, I’m now told that’s not the case. As of this afternoon, the Chicago Cubs are not – and have not – engaged in extension conversations with Willson Contreras this offseason.

Coupled with that is ESPN’s Jesse Rogers saying the last time the Cubs offered Contreras a contract extension was way back in 2017.

On Tuesday morning news broke that the Cubs agreed to a two-year contract with veteran catcher Yan Gomes that includes a third-year option.

Deal also includes a third-year option worth $6M and $1M in performance bonuses each year based on games started. https://t.co/lkgwilyCht

Now, there are several factors that could have gone into this decision by the Cubs. It could be as simple as getting a solid catcher to not only be a very good backup in case of injury to Contreras, but also to give Contreras more time off from catching while keeping his bat in the lineup with the DH coming to the National League.

Sure, Willson Contreras could be traded. But Jed Hoyer made it clear adding a catcher to reduce Contreras' workload was a priority this winter. I wrote about the need, why it could help him and the possible routes they may take with Contreras this winter. https://t.co/WgO6vgfBr4

Yet, you can’t look away from the $6.5 million that will be paid to Gomes in each of the next two years. That’s a lot of guaranteed money for a backup catcher even if it turns out that he also gets some at-bats at DH.

Personally, I immediately thought the Gomes signing meant 100% that a Contreras trade is coming next, but that story from Sahadev Sharma calmed my fears. However, I became a little more perturbed by Willson Contreras himself.

This isn’t anything new and really it could mean nothing at all, but every so often Contreras will tweet out something cryptic and it’s difficult not to read into it. Minutes after the Gomes signing was reported, Contreras tweeted this out.

Oh and then Contreras started liking tweets about being a trade chip and OMG look at the second one. 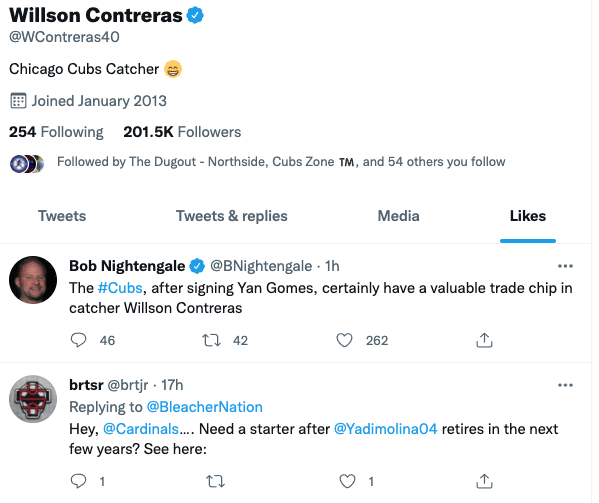 C’mon, Willson! Don’t play with us like that. I get it, emotional dude, but let’s rein it in a bit here.

Unless, the Cubs have already told Contreras about wanting to trade him and he’s just dropping subtle hints! AHHHHH!

Rogers also believes Contreras is on the trade block.

There is no way the Cubs can GUARANTEE Willson will be traded. He signed prob knowing he'll get plenty of playing time with the DH likely in the NL etc. But yes I think Willy is on the block

Contreras is in his final year of arbitration before becoming a free agent following the 2022 season. According to MLBTR’s annual arbitration projections, Contreras is set to make about $8.7 million next year.

The Cubs started their offseason by surprising many fans...
Chicago Cubs Rumors

The Major League Baseball offseason is officially underway, but...