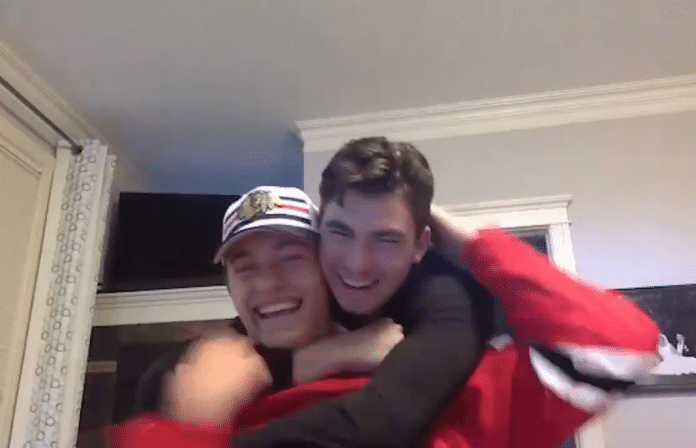 The Chicago Blackhawks have certainly done everything they can to provide positive vibes this weekend. It started with a monumental bang in the 1st round of the NHL draft when they pulled off a blockbuster trade for Columbus Bluejackets All-Star Seth Jones. This finally landed them a #1 defenseman they’ve sorely needed. Especially after the departure of Duncan Keith to Edmonton. GM Stan Bowman didn’t wait long to add another feel-good moment, this time making the year of promising center Kirby Dach by drafting his little brother Colton in the 2nd round.

The Blackhawks have had brother pairs on the team at the same time before. Yet this marks the first time they’ve been both this young and high-profile in terms of draft prospects. Kirby was of course the 3rd overall pick back in 2019. He played well as a rookie but missed most of last season due to a wrist injury. Even so, he managed 10 points in 18 games upon his return. A sign of improvement. Now he’ll get a chance to play with his brother, the 62nd overall pick.

Kirby couldn’t be more excited about it.

Big bro Kirby said it better than we ever could have as he crashed Colton Dach's first #Blackhawks media sesh! pic.twitter.com/Sionlf3g5T

The @NHLBlackhawks have selected Colton Dach in the @NHL Draft.

He’ll be teaming up with his brother @kdach77 in Chicago. ❤️ pic.twitter.com/AyRZX58MfG

Colton had himself a strong run in the WHL prior to the draft. Across 82 games, he scored 22 goals and dished 27 assists. He has plenty of size at 6’3 and doesn’t lack skating ability. Like his big brother, he works hard. There is no lag in the effort both offensively and defensively. He goes 100% all the time. Where the two separate is Kirby is more of a facilitator, setting up teammates for big plays. Colton is a natural scorer, boasting an accurate left-handed shot.

While he may not have the ceiling of his brother, the younger Dach has more than enough ability to be a long-term starter in the NHL. Somebody who can carve himself out a role in the middle 6 as a wing and provide a consistent offensive boost. Based on current projections, it is likely the Blackhawks will stash him for a year or two before bringing him up around 2023.

Kirby Dach and Blackhawks have reasons to be feeling good

He is healthy after fully recovering from the wrist issue. His little brother will likely be joining him in the not-too-distant future. Chicago added a genuine player for their long-suffering defense in Jones. Not to mention the team will be getting their beloved captain Jonathan Toews back after his long bout with Chronic Inflammatory Response Syndrome. A condition that cost him all of last season.

Considering other losses they suffered on top of all that, they still managed a record of 24-25-7. If Jones lives up to his new contract ($9.5 million per year), Toews regains some of his old form, and Kirby Dach ascends during a healthy season? This team has a chance to reach the playoffs and perhaps make some serious noise.

Especially if Alex DeBrincat and Dominik Kubalik keep do their things.

For the first time in a while, it feels okay to be optimistic about the Blackhawks again. Something that proved difficult following their post-2015 decline. Maybe, just maybe they can squeeze one more Cup run in before the last of the old guards is truly done.