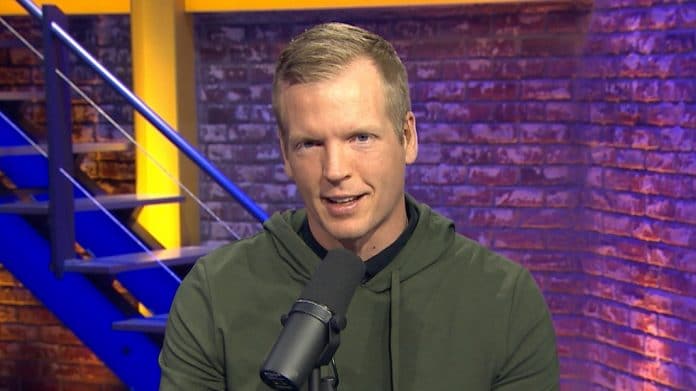 For some reason, a lot of Chicago Bears fans have decided to stop trusting their eyes on Justin Fields. Instead, they’ve been thrown into a panic courtesy of former quarterback Chris Simms. It is rather unusual. Simms did play in the NFL for a little while. He’s the son of former Super Bowl MVP Phil Simms. He even had a cup of coffee in 2012 as an assistant coach in New England. Yet people are treating his evaluations of quarterbacks this year as if they’re gospel.

Why? Much of it probably has to do with his evaluations from 2018. That year he ranked Lamar Jackson as the #1 QB in the class with Josh Allen and Baker Mayfield behind him. Jackson won league MVP in 2019. So when he released his ranking for 2021 and had Justin Fields slotted as the sixth-best in the draft? That turned a lot of heads. It is an evaluation Simms hasn’t backed down from either, ranking the Bears 11th overall pick as the 39th best QB in the league out of 40 qualifying names.

QB39 – Justin Fields
Special running ability. Arm is top notch. Could be a top 20 QB halfway through the season. But his bad mechanics scare me a lot…led to bad incompletions on routine NFL throws.
I am rooting for him, hope he makes me eat my words this season.

This already has some Bears fans worried. Did the team actually trade up for the wrong guy? Is this another bust in the making? This is where things really need to stop. Has Simms had some success evaluating QBs in the past couple of years? Yes. Has he been 100% accurate? Not even close. If one needs proof of this? Let us take a gander at his work from the 2017 draft. Here is an excerpt from his mock draft that year.

“Beauty is in the eye of the beholder, and that’s why you’ll probably find my mock draft different than others. I’ve put a lot of time and work into the evaluation of these draft prospects, and I’m basing my mock on my own evaluations.”

In other words, these projected picks are what HE would do.

Why is that important? For one, the first quarterback selected in his mock? Mitch Trubisky. That’s right. He has the North Carolina star going #6 overall to the Cleveland Browns. A natural connection given his Ohio roots. What makes it even better? Check out what Simms had to say about the likely outcome had this pick happened.

“Ultimately, the Browns might be scared that the New York Jets could take Mitchell Trubisky at No. 6, so I think they pull the trigger on the trade. Cleveland gets its quarterback and the Titans get extra draft capital—it’s a win-win.

The Browns could win this draft by making this move. They would get their signal-caller of the future and still take Garrett at No. 1.”

Oh, I’m sure Hue Jackson and that masterful coaching staff would’ve absolutely killed it with Trubisky throwing the ball to Ricardo Lewis and Rashard Higgins that year. It gets better though. Remember Deshaun Watson? You know, the guy who has gone to three Pro Bowls and is considered one of the five or six best in the NFL? Yeah him. Simms projected him going…wait for it…31st overall to the Atlanta Falcons. Behind guys like Obi Melifonwu, Fabian Moreau, Gareon Conley, and John Ross among others.

So maybe it isn’t the best idea to trust he knows everything there is to know about predicting who good quarterbacks will be.

That is what the NFL draft is. A huge educated guessing game. There is no such thing as a can’t-miss prospect. Just ones with a high degree of probability they’ll be good. Fields may not be the perfect prospect but the criticisms of him sometimes feel a little overexaggerated. People talk about his accuracy on routine throws and yet his completion percentage in 2020 was 70.2, a full point higher than #1 pick Trevor Lawrence at 69.2.

Want to go even deeper? Fields’ career completion percentage in college is 68.4. Lawrence’s is 66.6. This despite Fields averaging more yards per passing attempt at 10.7 to 9.8. With all due respect to Chris Simms, he doesn’t have any idea who will end up being the good quarterbacks in this class. He has his opinions. Nothing more.

Fields has more than enough talent to be a success in the NFL. If he learns to process the speed of this level and the Bears surround him with proper protection and weapons? He has the ability to become a legitimate star in Chicago. Simms has been right before. He’s also been wrong. So don’t lose sleep over what he has to say.