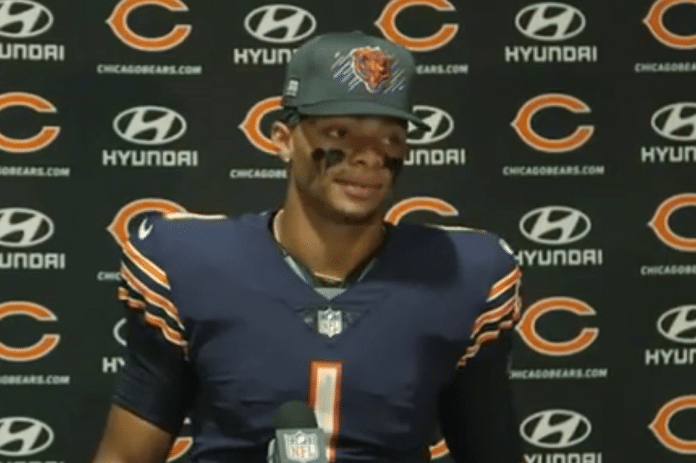 Justin Fields is not used to losing. He didn’t lose in high school and didn’t lose at Ohio State in college. This is not an experience he understands or enjoys. Such is the reality many young quarterbacks run into when they get to the NFL. Top draft picks usually end up on either bad or mediocre teams. Fields is trying to do everything he can to help the Chicago Bears win but nothing is working. At least when it comes to the passing game.

Sunday against the Tampa Bay Buccaneers was arguably his low point. Fields was sacked four times, fumbled three times, and threw three interceptions. Not all of that was his fault. Two interceptions were the result of wide receiver mistakes. The strip-sacks were caused by his offensive line either getting beat or outright missing blocks. The rookie didn’t have a chance. It would’ve been so easy to get discouraged after a game like that.

To his credit, Fields was defiant in his post-game presser.

He made it clear that the mistakes were unfortunate but that isn’t going to stop him from doing what he’s trying to do. Win football games. Above anything else? He doesn’t think a game like this, discouraging as it was, is an excuse to stop working. His job is to keep grinding and to get better. Wallowing in self-pity over a bad performance doesn’t do him or the team any favors.

That being said, it was clear Fields is frustrated. Like any competitor, he wants to win and he wants to play well. Right now he’s doing neither. Having never been in this position before, he isn’t sure how to feel. How to react. What he is feeling isn’t necessarily anger but it is clear something needs to change. That agitation came out when the rookie dropped a swear word for the first time ever during a presser.

Justin Fields has the right mentality on this

“Shit happens.” Yeah, that about sums it up. It would be so easy to let his emotions get the better of him. To lose his composure after getting crushed by the defending champs in a game where he never really had a chance to make plays. That is not something that is easy to accept. The fact it has happened to him a second time in five starts? It is frankly surprising he’s still so composed when it is obvious the situation around him is a mess.

So far this year, the Bears offensive line has allowed him to get sacked 22 times. Wide receivers, tight ends, and running backs have dropped eight of his passes to this point in the season. While not free of blame for the issues, Justin Fields is not the primary problem with this offense. It’s a system-wide issue. That falls at the feet of head coach Matt Nagy and also GM Ryan Pace. They built this structure and decided to throw the rookie into it.

Keeping those two guys just because they drafted Fields is illogical.

Having the good fortune to land a high-potential quarterback doesn’t mean they’re qualified to make him the best player he can be. The offensive scheme isn’t fooling anybody. The GM has yet to prove he can draft really good offensive talent. If the Bears don’t want to watch another promising QB go to waste, they have to take action soon.