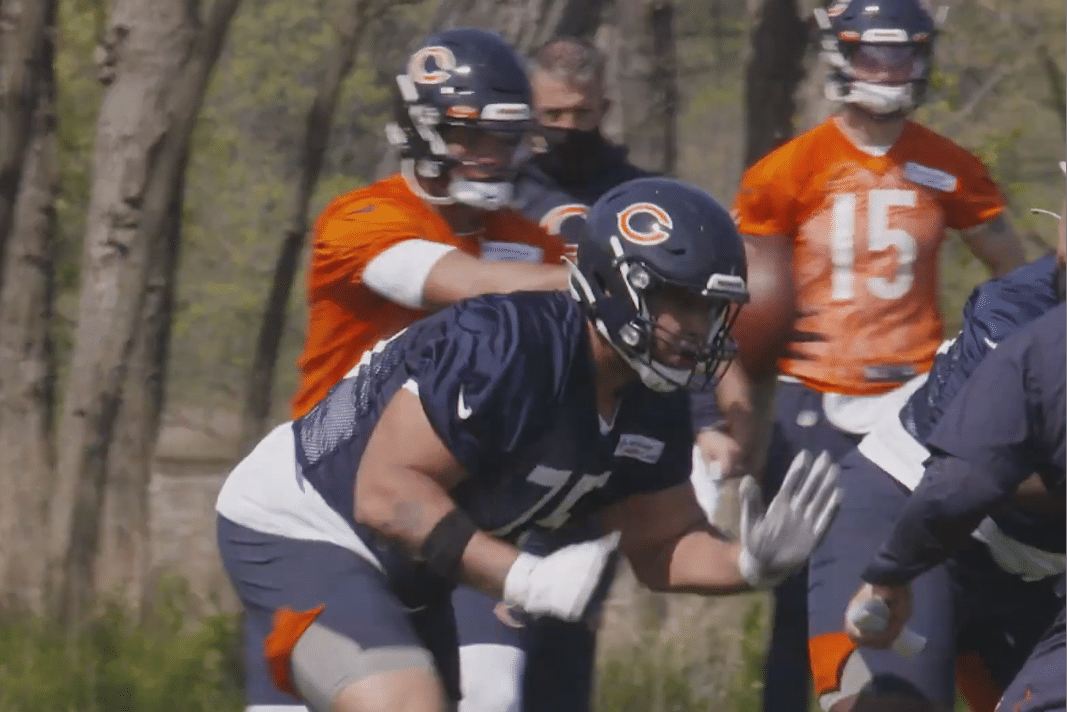 Most of the conversations around the Chicago Bears offensive line centers on Teven Jenkins. The 2nd round pick out of Oklahoma State has high expectations right out of the gate as the team prepares to play him at left tackle. That subplot has made it easy to forget others going into training camp. Particularly the looming battle at right tackle between veteran Germain Ifedi and 5th round rookie Larry Borom.

That is actually a thing. Both head coach Matt Nagy and offensive line coach Juan Castillo made that clear. Ifedi may have the experience but the team is much higher on Borom than people realize. Enough to where they’re prepared to give him a shot at taking the job outright as a rookie. Just try to imagine that. Has any team ever drafted and started two rookies at both tackle spots? That feels unlikely.

Quite a far cry from how things were going into the draft.

As is so typical every year, plenty of evaluators reached the same conclusion with Borom. While he had nice traits as a tackle at Missouri, it felt like his true ceiling in the NFL might be moving inside to guard. This due to a supposed lack of lateral quickness. Something that could make him a risk going against top speed rushers in the league. It appears Borom didn’t care for those assessments.

That was made clear when he showed up for public and private workouts almost 30 lbs lighter than he’d been during the season. A clear sign he was intent on fixing whatever issues necessary to stay at tackle. Then just for good measure, he openly stated his wish to stay at that position during an interview with Bears All Access.

Larry Borom isn’t selfish but he knows what he wants

He said he’d do whatever is necessary for the team but it’s obvious he loves the challenge of playing at tackle. He wants that responsibility. One has to admire a guy who knows what he wants and will put in the work necessary to get it. This seems to be a theme with the entire Bears 2021 draft class. A bunch of competitors with clear goals for the NFL.

For the team, their goal is simple. Get Borom back to around 330 lbs so he can better handle the sort of power he’ll see in the NFL. Then start working on his fundamentals. While he already has nice qualities as a pass protector, he needs more refinement. As for the run blocking? That is probably where the most work is required.

If he takes the lessons well?

Then August figures to be a huge month for him. Not only does training camp begin but the Bears will also play three preseason games. That figures to offer a huge opportunity to turn some heads. Larry Borom is no stranger to being doubted. He’s also no stranger to exceeding expectations. If the Bears are serious about giving him a shot, then they’re going to get everything he has.