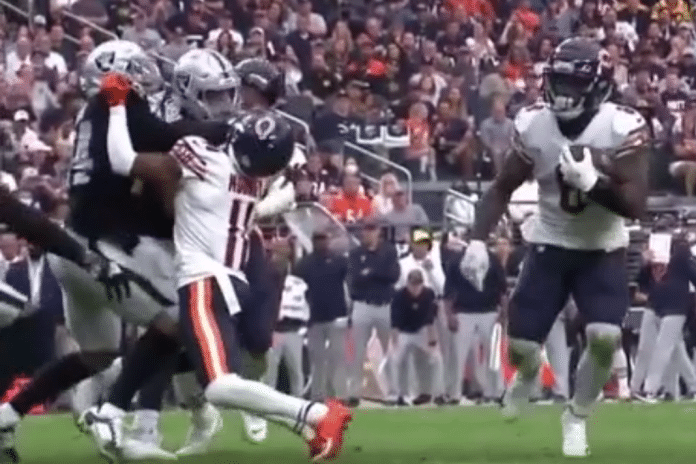 Darnell Mooney is leading the Chicago Bears in receiving this year. That alone is shocking considering his shares the field with Allen Robinson. Yet it’s true. The second-year receiver has 20 catches for 261 yards. Sure, those aren’t great numbers but considering the Bears are working with a rookie quarterback behind an iffy offensive line? It is the best they can do for now. Has this discouraged Mooney?

Not in the slightest. If anything, he has embraced the identity of what the Bears can do well on offense this year. Running the football. Keep this in mind. Mooney is 5’11 and 173 lbs. He is not big at all. So to say he is emerging as a quality blocker in the running game is something that should not compute. Yet proof exists. All one has to do is roll the footage from Damien Williams’ touchdown run in the 2nd quarter.

It was a thing of beauty.

Most remember it for Williams’ stylish spin move to reach the end zone. A lot of people missed the outstanding block by Mooney to provide the room to do that. At the snap, he comes down the line of scrimmage and throws his body into safety Johnathan Abram (#24). Keep in mind that Abram is 30 lbs heavier. Yet through momentum and great leverage, Mooney was able to box him out of the lane. A block that would’ve made offensive linemen proud.

So Mooney did that for much of the game. Then he almost casually delivered the most clutch moment of the afternoon. It came on 3rd and 12 in the 4th quarter. Las Vegas has narrowed the lead to 14-9. The Bears offense had been stuck in the mud most of the second half. They couldn’t afford another three-and-out. That was when Justin Fields found his favorite target.

Darnell Mooney is proving to be such a great find

It wasn’t a shock he fell to the 5th round last year. He was undersized for an NFL receiver and didn’t have overly huge production at Tulane. Yet coaches insisted that wasn’t his fault. He suffered from less-than-ideal conditions at quarterback. He made the best of a bad situation and had a voracious work ethic. They promised he’d be a better pro than he was a college player. So the Bears moved up to get him.

A few months later he was breaking the franchise record for receptions by a rookie. Bears fans would be more than happy with him just continuing to be a solid pass catcher for this team. Yet that isn’t good enough for Darnell Mooney. His mission is to become a complete football player. Somebody who doesn’t shirk his other responsibilities. Smaller stature be damned. If he is going to block, he is going to do it well.

If only others had that mindset.

This kid is so easy to cheer for. He does and says all the right things. A blue collar worker who wants to be great. It’s no wonder he and Fields hit it off so quickly. Their mindsets are so similar. Do whatever it takes to win.