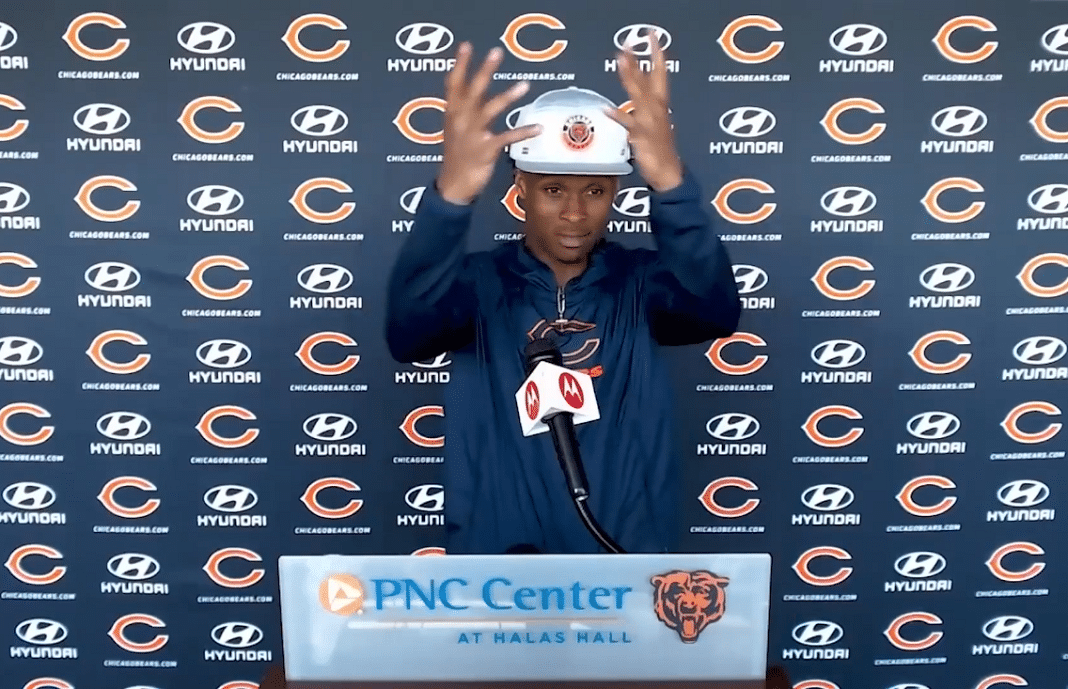 A lot of people had reasons to be happy when Justin Fields was drafted. The coaches because he represented a chance to save their jobs. The fans because he has enough talent to maybe break the longstanding curse the Chicago Bears have endured at quarterback. Yet few have more reasons to be excited than the wide receivers. They’re the ones who’ve had to catch the passes from this string of inferior QBs. None may be happier about Fields’ arrival though than Darnell Mooney.

There was so much to love about the receiver’s rookie year in 2020. He set the franchise record with 61 receptions in his first season and was second-best on the team behind Allen Robinson in yards. For a guy who came in as a lowly 5th round pick? That is beyond impressive. Yet the experience was also a painful one. Mostly because so many missed opportunities were left out there because Mitch Trubisky and Nick Foles routinely failed to find Mooney deep.

This guy is a genuine speed threat.

His greatest weapon is taking the top off the defense. There were numerous instances he got behind the secondary last season. Yet he only had three catches over 30 yards. Understand this. That number easily should’ve been doubled, if not more. This is because the throws were rarely on target. Thus the Bears offense was deprived of several big plays. Fields has a chance to change that.

Among his vast arsenal of physical tools, one thing that stands out the most about the young quarterback is his deep ball. It is arguably the best in the entire 2021 draft class. Not only does he have the arm strength to launch it 60 yards with ease. When he has a chance to set his feet, he routinely is able to hit the receiver in stride. Mooney got a taste of it already in OTAs. Needless to say? He’s a little bit excited.

Darnell Mooney may not have to wait for him long

Thus far the Bears have stood by their original message. Andy Dalton will be the starter in 2021. Fields will use that opportunity to learn from the sideline and prepare himself. When the time is right, the offense will be turned over to him. Nobody knows for sure when this will be. It could be a month into the regular season or it could be in 2022. A lot depends on how Dalton performs.

Early indications aren’t promising in that regard. This most recent practice saw the veteran get intercepted three times in 7-on-7 drills. Not a great look considering the defense was missing eight of its 11 starters. Fields on the other hand? He looked sharp. His deep ball is as advertised with one beauty going for a touchdown in the same practice. It isn’t hard to understand why Darnell Mooney is excited.

This could be a match made in heaven.

People always talk about the need for having a deep threat in order to have a truly effective passing offense. That is fine and all. The problem is finding a quarterback who can actually get them the football down the field. Fields definitely looks like he can be Mooney’s missing link.