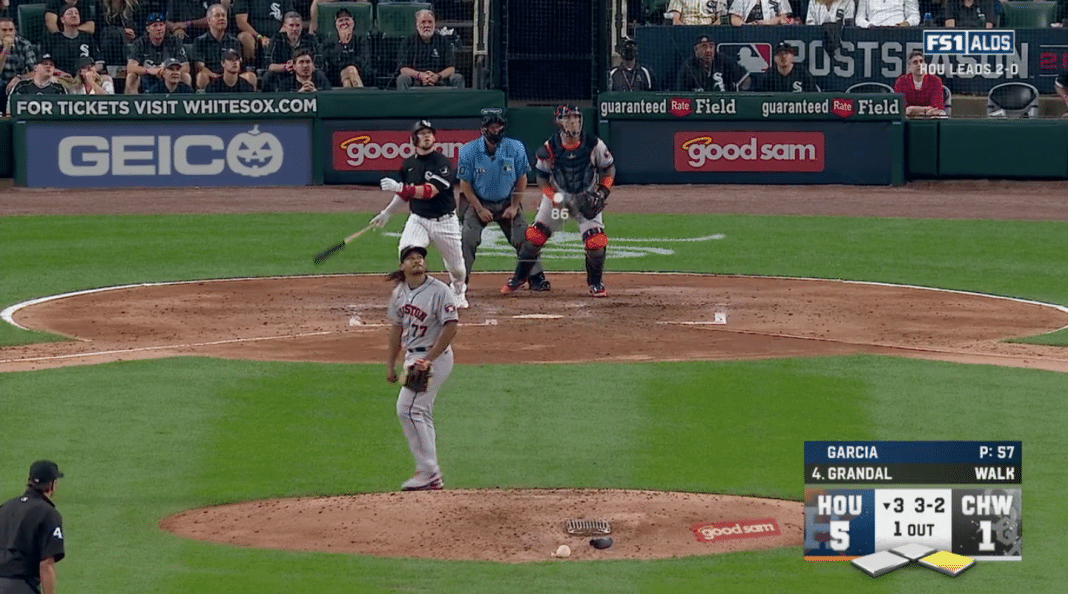 The White Sox had 20 base hits that were all singles against the Astros in the ALDS, but then Yasmani Grandal blasted Chicago’s first extra-base knock, hitting a two-run home run in the third inning. It could not have come at a better time as the White Sox were trailing 5-1.

Dylan Cease was not the answer Tony La Russa and White Sox fans were hoping he would be as the right-handed starter walked three batters and allowed three earned runs in 1.2 innings against the Astros in Game 3 of the ALDS.

Cease retired Houston in order to begin the game, striking out Alex Bregman on a 100mph fastball and then saw Eloy Jimenez give Chicago a 1-0 lead with an RBI-single to center field. However, Cease suddenly lost the ability to find the strike zone and after two consecutive walks in the second inning Kyle Tucker ripped a 2-run double to right-center field. Following a sac-fly that moved Tucker to third base, Astros’ rookie Jake Meyers singled to left that gave his team a 3-1 lead.

With two outs and a runner on in the second inning, Cease walked Altuve on four pitches and that was enough for La Russa to make a pitching change. Michael Kopech is now in and will be expected to pitch several innings after Cease’s short outing in the win or go home Game 3 Sunday night.

Altuve with a pop-fly in shallow right field.

Brantley grounds out to Hernandez.

Cease strikes out Bregman with a 100mph fastball.

A 13-pitch first inning for Cease.

Anderson lines a single to right field on a 3-2 pitch.

Robert lines out to center field.

Moncada lines out to right-center field.

Cease falls behind 2-0 and Tucker rips a 2-run double to right-center field. Astros take a 2-1 lead.

Gurriel flies out to deep right field and Tucker tags up to third base.

With the infield drawn in Meyers smashes an RBI-single to left field past a diving Moncada. Astros now lead 3-1.

Brantley flies out to left field.

Sheets strikes out swinging on a fastball up and away.

Garcia can’t check his swing on a breaking pitch low and inside and he strikes out swinging.

Anderson swings at the first pitch and grounds out to Correa.

Bregman chops one back to the mound, ball glances off Kopech’s glove as he reached up and it’s an infield single.

Kopech freezes Alvarez with an inside fastball at 97mph for a strikeout.

Correa hits a ground ball to Anderson, who makes a nice play for the force out at second base.

Robert lays off three straight pitches after falling behind 1-2 and draws a leadoff walk.

Abreu strikes out swinging on a curveball in the dirt.

Grandal hits an opposite-field, two-run home run and the White Sox cut the lead in half 5-3.

Jimenez hits a slow tapper to Correa, who charges and throws out Jimenez by half a step.

Garcia hammers a three-run homer to center field. White Sox back in the lead 6-5.