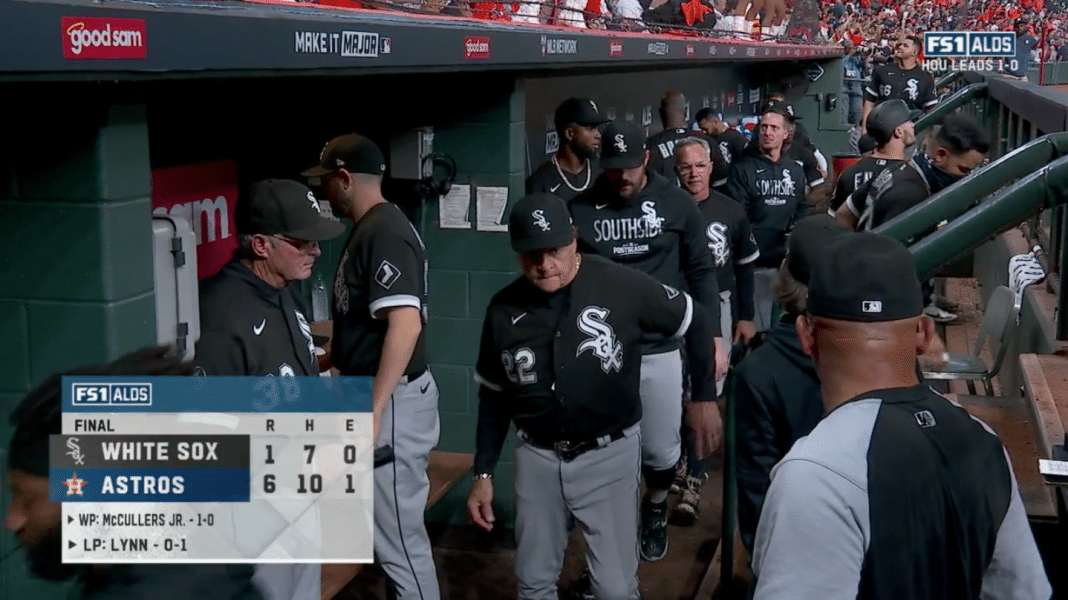 Everyone knew Lance Lynn has had a terrible time pitching against the Houston Astros and unfortunately for the White Sox that trend continued Thursday in Game 1 of the ALDS. Lynn failed to get out of the fourth inning, allowing five earned runs in 3.2 innings. The veteran right-hander threw 76 pitches as the Astros drove up the pitch count following the first inning and for the most part cruised to a 6-1 win.

Tony La Russa made the call to the bullpen after Michael Brantley delivered a two-out, two-run single in the fourth inning that gave the Astros a 5-0 lead. Meanwhile, Lance McCullers was stellar for the Astros, pitching into the seventh inning, allowing no runs on four hits in 6.2 innings.

Left-handed slugger Yordan Alvarez was Houston’s key player in Game 1, as he scored after a leadoff walk in the second inning, drove in a run with a double in the third and homered off Reynaldo Lopez in the fifth inning.

The lone run for the White Sox came in the eighth inning via a two-out rally. Tim Anderson dunked a single to right field, which was followed by a Yoan Moncada walk and then Jose Abreu singled to drive in Anderson. Yasmani Grandal gave White Sox fans a second of hope, but his long fly ball with two runners on was tracked down in center field to end Chicago’s scoring threat in the eighth.

Although the White Sox lost the series opener in Houston they were able to see the Astros’ top relievers. After throwing 25 pitches in the eighth inning, right-hander Kendall Graveman may be less effective after the high-stress inning. Dusty Baker also opted to use his closer Ryan Pressly leading by five runs in the ninth. Despite not scoring against Pressly, the White Sox saw 21 pitches from the closer.

Moncada flies out to left field.

Abreu goes down in the count 0-2, battles to a full count, fouls away several pitches and ultimately flies out to right field.

Lynn falls behind 2-0, but he strikes out Altuve swinging on a pitch that was in the left-handed batter’s box.

Brantley gets jammed and grounds out to Anderson, who was shifted to the right of second base.

Lynn with a quick 10-pitch inning.

McCullers strikes out Grandal with a nasty curveball.

Robert gets hit on his right wrist/hand by a sinker. Trainer comes out to see him, but Robert stays in.

Lance McCullers hits Luis Robert on the wrist and Robert looked to be in a ton of pain but he's staying in the game pic.twitter.com/03tnAQxob0

Jimenez flies out to right field.

Robert tries to steal second base on the first pitch to Sheets, but Maldonado throws him out to end the inning.

Alvarez draws a leadoff walk after a 7-pitch plate appearance.

Gurriel chases a 97mph fastball up and in and whiffs for a strikeout.

Correa singles through the right side and Alvarez stops at second base.

Tucker swings at the first pitch, gets jammed and flies out to right-center field. Alvarez tags up to third base.

Meyers singles to right field to drive in Alvarez in his first postseason at-bat. Correa advances to third base. Astros strike first and take a 1-0 lead.

Lynn strikes out Maldonado on a high fastball to escape the second inning only down one.

McCullers freezes Sheets with a breaking ball for his third strikeout.

McCullers fields a high bouncer in front of the mound and throws out Engel.

Garcia grounds into the shift as Correa throws him out.

McCullers faces the minimum through 3, throws 15 pitches in the third, 41 total.

Another long plate appearance for the Astros as Altuve draws a leadoff walk.

Moncada makes a great play on a surprise bunt from Brantley, who is out by half a step at first. Altuve goes to second base.

Wild pitch and Altuve trots to third base with only one out.

Bregman hits a sharp ground ball to Moncada, who makes another nice play to field it, spins and throws home but not in time to get Altuve who made a great slide to score. Astros go up 2-0.

Alvarez drills an RBI-double off the wall in left-center field. Astros go up 3-0.

Correa grounds out and Lynn gets out with no more damage.

Anderson gets ahead 3-0, but ends up grounding out to short on a full count.

Moncada singles to center, the first Chicago hit against McCullers.

Abreu grounds into a fielder’s choice to short, Moncada to second base.

Grandal bounces one back to McCullers to end the inning.

Tucker lines out to Robert in center field.

Meyers with his second single.

Altuve lines a 2-0 pitch down the line in left field for a double. Meyers stops at third as Jimenez gets a favorable bounce back to him off the scoreboard.

Brantley with a big hit, singles and drives in two to give Houston a 5-0 lead.

It's ALL @astros in Game 1. pic.twitter.com/bK1tdIdzUn

Lynn is done after throwing 76 pitches in 3.2 innings.

Bregman flies out to left field.

Robert with a swinging bunt to third and he reaches safely. Bregman charged with a tough error.

Sheets grounds out to second and Robert moves over to second base.

Engel grounds out to Correa.

Alvarez with a solo home run to right-center field and the Astros extend their lead 6-0.

Lopez makes Tucker look silly and strikes him out swinging on a pitch way outside.

Meyers grounds out to Garcia.

Garcia with a slow-roller to Gurriel, who flips it to McCullers for the out at first base.

Anderson grounds out to Altuve on one pitch.

Moncada with a deep drive to right field, but Tucker reaches up to make the catch on the warning track.

An eight-pitch inning for McCullers, who’s thrown 89 through six innings.

Maldonado swings at the first pitch from Lopez and grounds out to Anderson.

Altuve breaks his bat and pops up to Anderson.

Brantley takes an inside pitch and finds a hole through the left side for an infield single as Anderson can’t range over in time to field the ball cleanly.

Bregman with a hard-hit single to center field.

Abreu starts the seventh with a single to center.

Grandal grounds into a 4-6-3 double play.

And you most likely missed that double play because here’s what happened on FS1.

Robert lines a single to left field on the first pitch.

Jimenez with a line-drive single to center and McCullers is done after 6.2 innings pitched.

Sheets grounds out to Bregman.

Gurriel chops one to Moncada for the first out.

Correa singles down the line in right field.

Crochet strikes out Tucker looking with a fastball.

Jose Ruiz comes in for Crochet.

Meyers can’t check his swing and Ruiz strikes him out swinging.

Kendall Graveman comes in for Maton.

Engel flies out to right field.

Garcia flies out to the warning track in left field.

Moncada with another good plate appearance and he ends up walking.

Abreu with an RBI-single to right field on a 0-2 pitch. White Sox get on the board 6-1.

Grandal makes good contact, but he flies out to deep center field.

Maldonado pops up to Anderson.

Altuve grounds out softly to Moncada.

Brantley pops up to Moncada.

Robert goes to second on a wild pitch.

Altuve makes a bare-handed play to throw out Engel.