The hot stove is heating up and Rick Hahn is making moves. Drumroll please… The Chicago White Sox avoided arbitration with relief pitcher Evan Marshall and signed him to a $2 million, one year contract. The 30-year-old right handed reliever will be returning for his third season with the White Sox.  Last season he posted a 2.38 ERA and 2-1 record in 23 appearances.

While it is not the flashy news White Sox fans were hoping for it is a no brainer for the front office.

Marshall has been a key cog in a much improved White Sox bullpen over the last couple of seasons. Over the course of two seasons the veteran has gone 6-3 with a 2.45 ERA. He averaged a career best 11.91 strikeouts per nine innings. He also limited opponents to a .198 batting average including a minuscule .119 mark vs. left handers.

The current average age of the bullpen on the White Sox 40 man roster is 25 years old. Making Marshall the oldest member. Having a reliable veteran at the back end of your bullpen is a nice luxury for Tony La Russa and company.

The 29 year old outfeilder has already had his fair share of memorable moments on the Southside. He committed homers robbery on multiple occasions. Arguably his most memorable moment came last August when he snagged a slicing line drive of the bat of Erik Gonzalez to secure the final out of Lucas Giolito’s no-hitter.

While Engel hangs his hat on defense he has quietly improved as a hitter. Last season he put up some of his best numbers hitting .295 with three homers and 12 RBIs. Engel was rewarded for his efforts by starting all three games of Chicago’s wild-card series against Oakland. He even homered in Game 1.

Once again this move does not make for any breaking headlines but it was the right decision for Rick Hahn. Adam Eaton was signed to be the starter in right field but given his injury history it makes sense to have a solid backup behind him. Engel can also serve as a defensive replacement late in games. This is something that should help minimize Eloy Jimenez bumbling in the outfield. 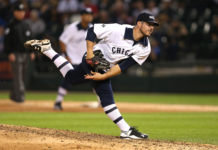 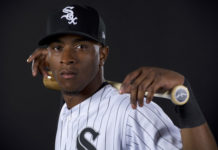 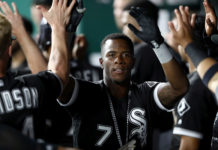