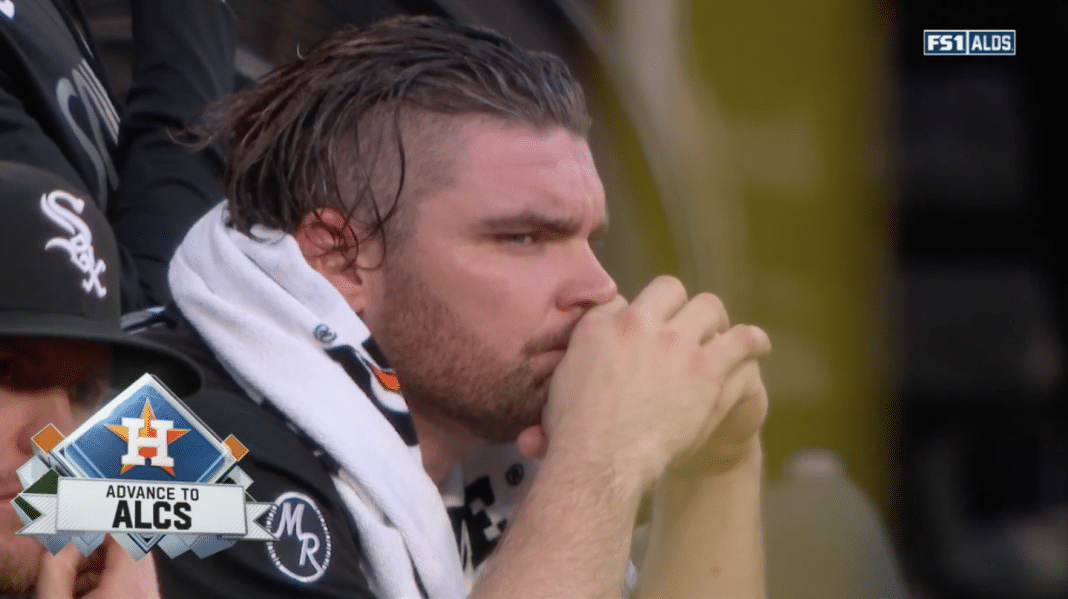 Nothing went right for Tony La Russa and the White Sox in Game 4 of the ALDS, as they lost 10-1 and were eliminated from postseason play by the Astros.

Chicago had a 1-0 lead heading into the third inning, but Carlos Rodon ran out of gas and Carlos Correa knocked him out of the game with a two-out, two-run double. Houston did not look back, scoring three more runs in the fourth inning, single runs in the seventh and eighth and Jose Altuve capped off the victory with a three-run homer in the ninth.

Michael Kopech, who got the final out in the third inning after Correa’s double, struggled in the fourth. He gave up three hits, one an RBI-single by Martin Maldonado and Kopech was charged with three earned runs after Garrett Crochet allowed a two-run double coming in relief.

The White Sox had a few chances to chip away at the lead, but a couple double plays derailed any plans of a comeback.

The Astros will now face the Red Sox in the ALCS.

Altuve lines the first pitch down the left-field line for a leadoff double.

Brantley grounds out to second. Altuve moves over to third base.

Bregman chases a high fastball and strikes out swinging.

Alvarez goes after a high fastball and whiffs for a swinging strikeout.

And is fired up pic.twitter.com/W564XIOlXI

Rodon throws 12 pitches in the first and consistently throws in the upper 90s with his fastball.

Anderson flies out to center field on the first pitch.

Robert swings at the first pitch and grounds out to Bregman. Moncada goes to second base.

Abreu works a full count and draws a two-out walk.

Grandal strikes out swinging on a breaking ball.

Correa singles to left field on a 0-2 pitch.

Gurriel fouls out to Abreu on a 2-0 pitch.

Tucker lines out to Jimenez in left field.

Meyers swings at the first pitch and flies out to right field.

Rodon works past another leadoff hit and throws 14 pitches in the second, 26 total.

Jimenez grounds out to Bregman.

Sheets hits a home run to dead center field and the White Sox take a 1-0 lead.

Brantley flies out to Robert in right-center field.

Altuve steals second base on the 1-0 pitch.

Alvarez walks and the bases are loaded for the Astros.

Correa with another hit on a 0-2 pitch as he lines a two-run double to left field. Altuve and Bregman score, Alvarez stops at third base and the Astros take a 2-1 lead.

Carlos Rodon is done after throwing 56 pitches in 2.2 innings. Michael Kopech comes in to pitch.

Abreu makes a great play, making a diving stop to his right, flips it to Kopech who beats Gurriel to the first base for the third out.

Robert taps one past the mound toward Correa and reaches on an infield single.

Abreu grounds into a 6-4-3 double play to end the inning.

Tucker steals second base on the 1-0 pitch.

Tucker steals third base on the 1-1 pitch.

McCormick grounds out to Moncada, who was even with the bag at third. Tucker stays at third base.

Altuve singles to right field. Maldonado stops at second base.

The @astros can taste it. pic.twitter.com/ib3AbZCmpP

Jimenez grounds into a 4-6-3 double play.

Garcia falls behind 0-2, but ends up walking.

McCullers freezes Hernandez with a fastball up in the zone for a strikeout to end the inning.

Correa gets jammed and he grounds out to Hernandez.

Gurriel pops out to Hernandez.

Tucker flies out to left field.

Anderson works a long at-bat, ends up grounding out to Altuve up the middle.

Moncada grounds out to Altuve.

Maldonado bunts and McCormick moves to second base.

Altuve pops out to Anderson.

Abreu grounds out to Bregman.

Alvarez grounds out to Moncada.

Gurriel hits a slow tapper to the left side and reaches on an infield single.

Tucker flies out to Jimenez just shy of the warning track in left field.

McCormick can’t check his swing and he strikes out.

Sheets lines out to Gurriel.

Anderson hits a ground ball up the middle, Correa fields it and steps on second base for the out.

Maldonado grounds out to Anderson.

Altuve hits a grounder to shortstop, Anderson with a low throw that Abreu can’t pick and Altuve hustles to second base as the ball trickles past first base.

Altuve advances to third base on a wild pitch.

Brantley chops one up the middle and past the drawn-in infield for an RBI-single. Astros lead 7-1.

Brantley steals second base on a 2-2 pitch.

Bregman pops up to Moncada.

Correa grounds out to Anderson.

Moncada flies out to Brantley in left field.

Engel grounds out to Correa.

Abreu gets hit by a fastball.

Grandal hits it into the shift and Correa throws him out.

Tucker hits into a fielder’s choice to first base. Gurriel out at second base.

Maldonado strikes out swinging on a high fastball.

Garcia hits into a fielder’s choice.

Hernandez grounds out to second.