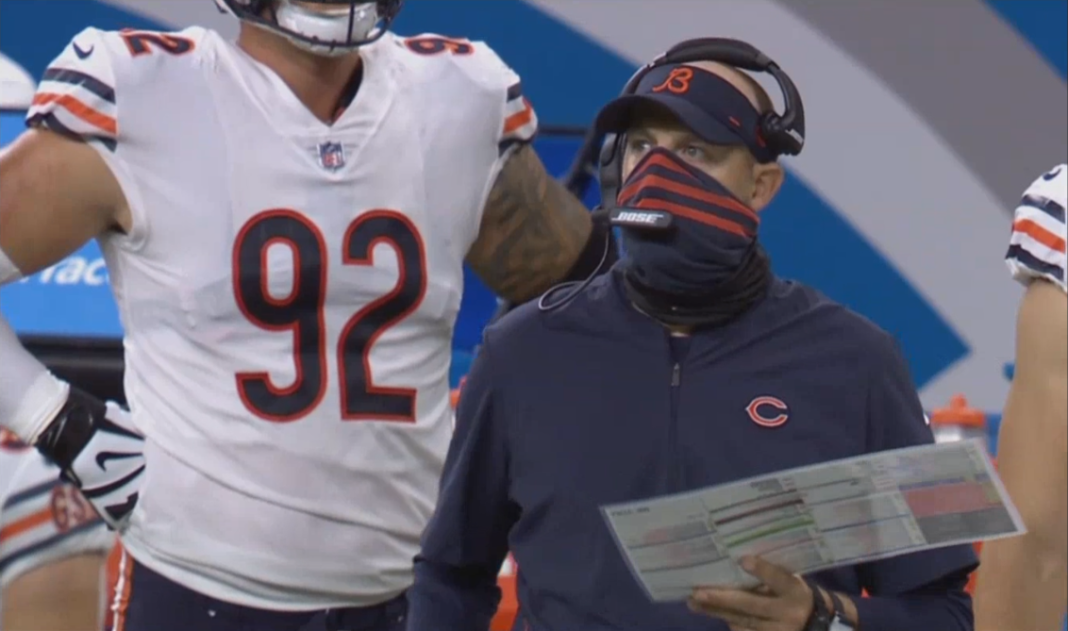 Matt Nagy is a man under siege. The Chicago Bears are 5-5 after starting 5-1. Their offense is the second-worst (somehow) in the NFL and maybe one of the worst in franchise history. Considering he was hired as head coach to fix that problem, it doesn’t reflect well on his supposed standing as an offensive guru. Most are understandably pointing the finger at him for all the nightmare fuel this unit has given fans this year. However, former tight end Zach Miller isn’t one of them.

He was with the team in 2018 when Nagy arrived. He’s followed the team closely since retiring. The man has a lot of friends on that roster. Considering Nagy benched one of them in Mitch Trubisky, it would be easy for him to bury the head coach as so many others have. Instead, Miller holds a different view. One that others seem to share.

Nagy is at the mercy of a truly awful offensive line.

On The Tape Never Lies show on YouTube, Miller was a guest. He was asked about the state of the offense and where he placed primary blame. There was no hesitation. The offensive line is the reason for its dismal performance and it’s not really close. Miller defended Nagy, claimed he’s seen that offense first-hand. When the blocking is right, as it often was in 2018, the system works.

However, GM Ryan Pace just has done a good enough job keeping that area of the team properly stocked. No 1st round pick in the entirety of his tenure. Just two 2nd round picks. He’s leaned a little too heavily on players who were already on the team prior to his arrival. Charles Leno at left tackle. Kyle Long at right guard. Leno remains average at best and Long was forced into early retirement due to injuries.

Now the overall talent level of the front five is dangerously low, and it’s showing up every single week.

Nagy isn’t completely free of blame. He hasn’t done a good enough job trying to coach around the line issues with a greater commitment to running the ball and simplifying the offense. That being said, the reality is there isn’t much he can do when the blockers just flat out get beat on so many snaps. He can only coach them who they should block. He can’t also do the blocking for them.

When you have guys a former defensive tackle (Rashaad Coward), a former undrafted free agent (Alex Bars), and 7th round pick (Arlington Hambright) as starters? It’s hard to imagine why anybody could think that line is capable of blocking NFL defenses on a regular basis. Good coaching goes a long way, sure. However, this is still professional sports. Talent always wins out in the end. The Bears don’t have enough of it.

Is this enough to warrant giving Nagy more time?

Zach Miller seems to think so. His argument is valid and it seems like other players aren’t buying the idea their head coach is the problem. Cordarrelle Patterson tweeted out such feelings recently. The Bears have two options on the table. Clean house with Nagy and Pace both gone and let the next regime fix their problems. Or they allow them to go about retooling the offense next offseason.

A big decision for George McCaskey, who is rumored to be angry with both of them right now. Much will be determined over the final six games.