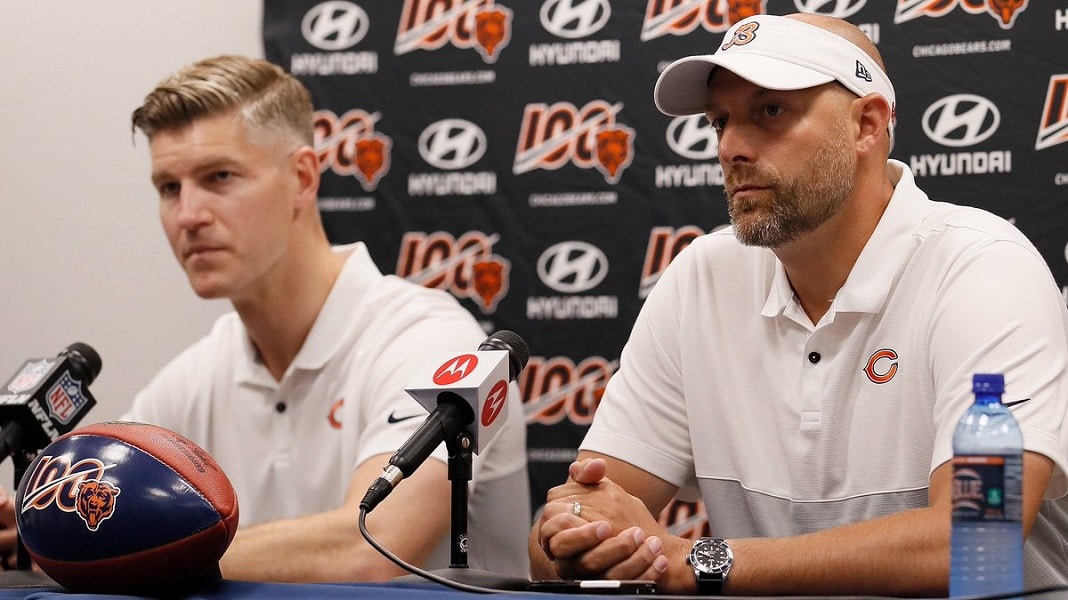 Matt Nagy and Ryan Pace are about to enter their fourth season together. That is the longest tenure a head coach and GM combo has had with the Chicago Bears since Lovie Smith and Jerry Angelo went from 2004 to 2011. Finding stability is one of the reasons George McCaskey elected to bring the two back. The team chairman feels they have the right character, leadership, and plan to make this organization a success.

This is despite evidence that both might not be up to the task. Rest assured. Neither is the worst the Bears have ever employed. Nagy is far superior to the days of Dick Jauron and Dave Wannstedt. Pace is better than Phil Emery, Mark Hatley, and Rod Graves. Yet just because that is the case doesn’t mean this franchise can’t do better.

People aren’t sure what to expect in the coming 2021 season. Some out there think it doesn’t matter. That both Nagy and Pace are safe because they drafted Justin Fields. Here is an argument against such an idea and why when everything has played out, both men won’t return in 2022.

Does Nagy even recall the vitriolic backlash from fans when the team signed Dalton? It was ugly. They wanted no part of that idea. Sure he had some success in Cincinnati but that was years ago. Most agree the 33-year old passed his peak long ago and has always been the epitome of average. He might be better than Mitch Trubisky or Nick Foles, but not by as much as the coach probably thinks he is.

Yes, there is logic to Nagy’s plan. Play the veteran while the youngster sits and learns. The problem is he is not in the same position as Andy Reid was back in 2017. Four playoff appearances in five years, five straight winning seasons, and a playoff win. Alex Smith was a far more proven QB deeply immersed in the offense by that point. Nagy has one winning season in three years, no playoff wins, and Dalton has never played in this offense before. It is not the same thing.

This is the point of contention that has so many Bears fans railing against Matt Nagy. Most agree that in terms of leadership? The man is capable. He can command a locker room and motivate players. The problem is he was also brought in to solve the Bears’ ongoing issues on offense. In three years to this point? He has failed. In that time the team has finished 21st, 29th, and 26th in total offense. One of the worst in the NFL.

Most of that was with him as the play caller. Ready for a real kick in the gut? Between the start of 2018 and midway through 2020 when Nagy held the call sheet? The Bears scored 30 or more points in a game seven times. After he handed the responsibilities off to Bill Lazor last season? They did it four times in a row between December 6th and 27th. It was evident that the unit just functioned better that way. Nagy’s constant inability to get off to good starts, handle the game flow, understand personnel, and instill proper discipline was evident. That did not deter him from seizing the call sheet back anyway.

Lack of a defensive safety net

The primary reason Nagy has survived this long is the strength of the Bears defense. It has not finished worst than 11th in the NFL during the length of his tenure. That is certainly a nice thing to fall back on when your offense is constantly hemorrhaging with issues. It is possible that safety net might not be there this season. Start with the most obvious reason. Not only is the defense getting on the older side with several starters over 30, but they also lost two key starting cornerbacks in Kyle Fuller and Buster Skrine.

Then there is the matter of the schedule. Not team faces a more brutal slate of opposing offenses than Chicago this year. It starts with the Rams on opening night and doesn’t really let up from there.

You’re saying the Bears are going to hold all those teams to 20 points or less? Not a chance. Sean Desai may get them to play well, but he’s not a miracle worker. This team will have to score if it wants to win. Something Nagy has proven incapable of delivering.

Too many high-profile whiffs

Pace is a divisive figure these days. Some people love him. Some people hate him. Both sides have good reasons to feel that way. On the one hand, the GM has earned a reputation for finding quality talent in unexpected places. Late round picks who became impact starters (Adrian Amos, Eddie Jackson, Bilal Nichols) and cheap free agents who became stars (Akiem Hicks). The guy built a great defense and dragged this organization out of the basement.

Even so, that hasn’t been enough to compensate for his mistakes. Especially when it comes to his big moves. His 1st round picks of Kevin White, Leonard Floyd, and Mitch Trubisky. Taking a gamble on a small school tight end in Adam Shaheen. Trading up for Anthony Miller. Signing Robert Quinn for $70 million. Extending Danny Trevathan despite his age. All of these moves have held the Bears back. Not to mention two coaching hires in John Fox and Matt Nagy that haven’t yielded the results everybody hoped for.

This is connected in part to those whiffs he made. Due to his draft inconsistency, Pace has been forced to rely more and more on veteran free agents. That can get expensive, especially if the team ends signing guys who aren’t really worth the money. Something he has done on multiple occasions. Especially in 2020 with Quinn and tight end Jimmy Graham. Now the Bears are looking at tons of dead money next offseason and a limited salary cap because of those deals.

Money that should be used to start building around their young quarterback. Pace’s ultra-aggressive mentality can provide plenty of excitement, but it’s also reckless and has left his team in an awkward spot. Likely unable to seriously retool their roster until 2023. By that point, Fields will be in his third season. Responsibility for this falls at the feet of the GM.

Yes, he was the one who drafted the quarterback. That doesn’t excuse him from mismanaging the rest of the roster along the way.

Matt Nagy and Ryan Pace aren’t safe. Or at least they shouldn’t be.