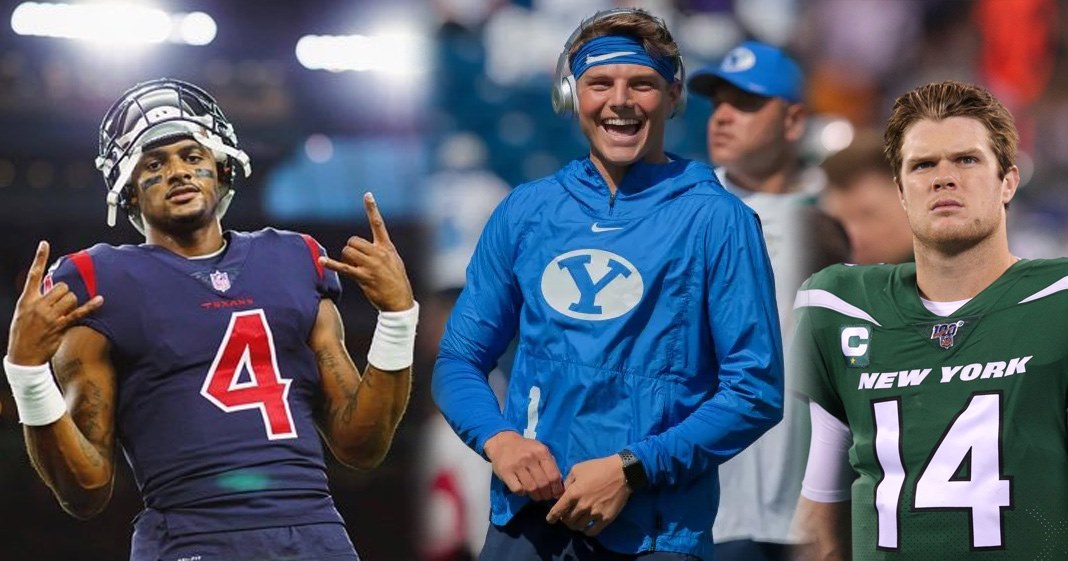 Ryan Pace and Matt Nagy should thank their lucky stars that George McCaskey is running the Chicago Bears. If somebody with some actual experience in the football business were in charge, the odds are pretty strong both would be out of a job right now. Instead they’ll be back for 2021. It’s obvious what the expectations are. To get back to the playoffs and win.

To do that though everybody knows the score. They need a quarterback. Right now they don’t have one. Mitch Trubisky is a free agent and unlikely to return. Nick Foles was an expensive experiment that flopped. So if they’re going to move forward, they need some fresh blood. Ideally, somebody who can help them win immediately.

Who will that be? There are a lot of names to sort through. Here are the ones to watch for based on category and likelihood.

The kid was quite a revelation out of Florida, throwing 43 touchdowns to just eight interceptions in 2020, becoming a Heisman finalist. Teams like his poise, his accuracy, and his size at 6’5. The problems they have center around a rather pedestrian arm and lack of mobility. Two things that could be paramount playing in Chicago behind an average offensive line.

Once again the “Red Rifle” proved that he can be more than serviceable for a team when given pieces to work with. After a rocky start in Dallas filling in for the injured Dak Prescott, Dalton finished with 13 touchdowns to just five interceptions over the final seven games of the season. Dallas was 4-3 in those games. He isn’t anything fancy but he is steady, experienced, and has made the playoffs before.

The man known as “Fitzmagic” did his thing yet again for another struggling franchise. Despite being benched twice in favor of Tagovailoa down in Miami, the ageless 38-year old led the Dolphins to five crucial wins in their 10-6 record and finished with a 95.6 passer rating. The offense scored at least 23 points in five of his seven starts. Despite never being viewed as “the guy”, Fitzpatrick finds ways to win football games despite difficult circumstances.

While he may not be as physically gifted as his predecessor Tua Tagovailoa, many consider Jones to be a better quarterback. He processes the field well, throws with very good accuracy and touch and has one of the best deep balls in the 2021 class. He’s not overly big or mobile but he has enough of each to get by. He finished this season with 41 touchdown passes and just four interceptions.

All he does is win. People can argue about the stats all they want. The bottom line is that when Smith plays, his team often ends up winning. Returning from a gruesome leg injury back in 2018, the 36-year old started his first game in almost two years on November 15th. He threw for 390 yards in a narrow loss to Detroit. After that, Washington went on to win his next five starts. He has deep ties to Nagy from their days in Kansas City, a relatively affordable contract ($23.3 million in 2021), and will require low draft compensation. It’s a move that isn’t hard to envision.

The wily veteran proved once again that he can still play in the NFL. He finished with over 4,000 yards for the eighth-straight season with 24 touchdowns and 11 interceptions, leading the Colts to an 11-5 record. Unfortunately, he came up just short in the wild card round against the red hot Bills. He is a free agent once again and turns 40-years old. Indy signed him for $25 million this past season. That will likely be the same number he seeks either with them or a new team.

The Wentz story is crazy. Back in 2017, he was on course to win league MVP before tearing his ACL. The Eagles won the Super Bowl without him. In 2018, he missed more time with injuries, playing just 11 games and going 5-6. Then in 2019, it looks like he finally established himself with over 4,000 yards, 27 touchdowns, and just seven interceptions. All of sudden this year he throws 16 touchdowns and 15 interceptions and gets benched for Jalen Hurts. The firing of Doug Pederson makes Wentz being available for trade less likely. If it did happen, he’d bring a huge $34 million cap hit and is projected to cost multiple picks including a 1st rounder.

Ryan Pace and Matt Nagy have gone against Stafford for three years together now. In that time he’s remained one of the most underrated quarterbacks in the NFL. Despite being on a bad team and missing his best weapon most of the season, he still topped 4,000 yards with 26 touchdowns and 10 interceptions. The problem is he turns 33 this February. Detroit isn’t quite sure if he can survive another rebuild. With the 7th pick in the draft, this may be their chance to find his successor and trade him while he’s still in his prime. He’d be perfect for a win-now team like the Bears. Would the Lions actually consider trading him to a division rival? Not unless the offer is substantial. As in two 1st round picks plus change.

Many now consider this the biggest fish of the 2021 offseason. A major rift has formed between Watson and Houston Texans ownership. The three-time Pro Bowler is angry that the organization promised to listen to his input regarding the hiring of a new GM and head coach and then promptly hired Nick Caserio without informing him. There is a genuine belief he might force his way out of town. The 25-year old is coming off the best season of his career and just signed a new contract. Expectations are he could cost at least three 1st round picks. The good news? He’d only carry a $15.9 million cap hit this year. So that would buy the Bears some time to rearrange their cap before the big $40 million bomb drops next year.

The key difference here is Prescott will be a free agent. Make no mistake. The money required to sign him will be immense. Probably $40 million per year. What makes it more palatable for the Bears is they wouldn’t have to also give up draft picks to get him. Prescott was having the best season of his career before a broken ankle ended his year. He’s a Pro Bowler and one of the most beloved leaders in the locker room. Will the Dallas Cowboys actually let him hit the market? That feels unlikely but if it happens, this is the guy Pace and Nagy are 100% certain to zero in on, regardless of price.

It’s not certain what the San Francisco 49ers have planned at quarterback. They have no top 10 pick but at the same time, they’re in a good position to move on from Garoppolo with minimal cap ramifications. He’s only played one full season healthy for the team, leading them to a 13-3 record and a Super Bowl berth in 2019. He threw 27 touchdowns with 13 interceptions that year. A native of Arlington Heights and alum of Eastern Illinois, it would be an interesting story to bring the 29-year old home. Odds are he’d be cheap too if the 49ers end up cutting him.

The New York Jets hold the #2 pick in the upcoming NFL draft. This makes it likely they could start fresh at quarterback rather than continue forward with Darnold. The 23-year old has a ton of talent but has struggled with inconsistency. Not all of it his fault having been surrounded by bad coaching and mediocre teammates. There are flashes of brilliance in his game. His beating the L.A. Rams and Cleveland Browns in consecutive weeks is a perfect example. He still has a year left on his rookie deal. Would Nagy feel he can succeed where Adam Gase failed?

If there is one draft prospect that fits the profile of what both Ryan Pace and Matt Nagy would target? It’s Wilson. He has a chance to drop just far enough in the 1st round to consider a trade up to get him. The BYU star has size, athleticism, a strong arm, a lightning-quick release, and can be lethally accurate. All indications are he carries himself like a leader and isn’t afraid to have the ball in his hands late. There are concerns about the level of competition he’s played but given his domination of it? He is a worthwhile risk.

The man will be 36-years old next season. His salary cap hit will be north of $40 million. So there are definitive reservations to be had about this. That said, the money issues can be sorted out in a variety of ways. Ryan hasn’t had less than 4,000 yards passing since 2010. He finished with 26 touchdowns and 11 interceptions in 2020. So there are no signs he is slowing down. His intelligence and experience are at top tier levels and might be able to handle Nagy’s complex offense. Somebody who can step in immediately and be productive. Given his age, the Bears may not have to surrender a 1st round pick too.

If anybody checks every box of what the Bears would want, it’s Carr. He is just 30-years old coming off his best season with 4,103 yards, 27 TDs, and nine interceptions. Better still, he has two years left on his current contract with a highly-manageable $21 million average per year. Plenty around the Raiders organization feels head coach Jon Gruden could be looking for the next quarterback. There were such rumors this past season and they came to nothing but they haven’t gone away. He has the size, arm strength, accuracy, and mobility to be a great fit in Chicago. If Pace made a strong enough push, would Gruden be able to turn it down?