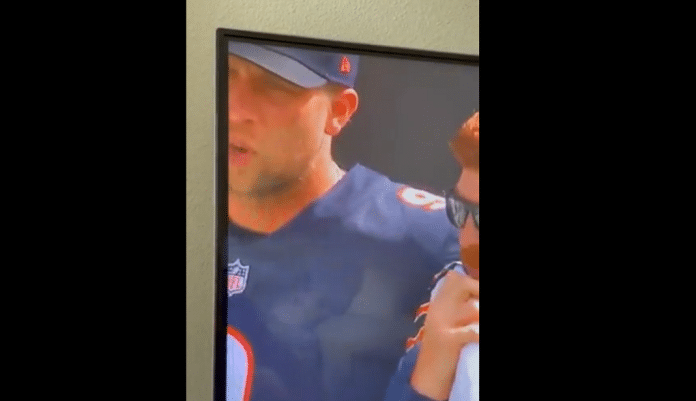 Matt Nagy isn’t the most popular man lately in Chicago. Probably because his offense continues to disappoint. A lot of people were anxious to watch Justin Fields in his first start. Instead what they were treated to was another chapter in a long saga of inept performances. One that saw the rookie get sacked so many times and unable to find a rhythm. There have been rumblings that players in the locker room aren’t impressed with Nagy. Nick Foles is one of them.

He was seen last year talking with the head coach on multiple occasions in an animated fashion. It was apparent that he wasn’t happy with how Nagy ran things. Sure enough, cameras caught the veteran on the sideline again on Sunday. While talking to Andy Dalton, Foles’ lips were seen muttering the words “offense just isn’t working.” A classic case of understatement if ever there was one.

Not to mention another possible dig at the man running it.

It’s fair to wonder if Nick Foles’ statement is an indication of something deeper. Is he stating this just about the game or the offense in general? Nobody can say but it’s clear where his feelings are at. Do other players feel the same way? Don’t forget Nagy had to give up play calling once before already. With three bad games under his belt to start 2021, the calls won’t be for him to give it up this time. They’ll be for him to get fired.

This organization doesn’t want to see yet another promising young quarterback ruined by inadequate coaching. Nagy’s leash is only getting shorter. It is fair to wonder what sort of adjustments he’ll try to make in the next couple of weeks. Either that or he’ll more likely just go back to Dalton as the starter.