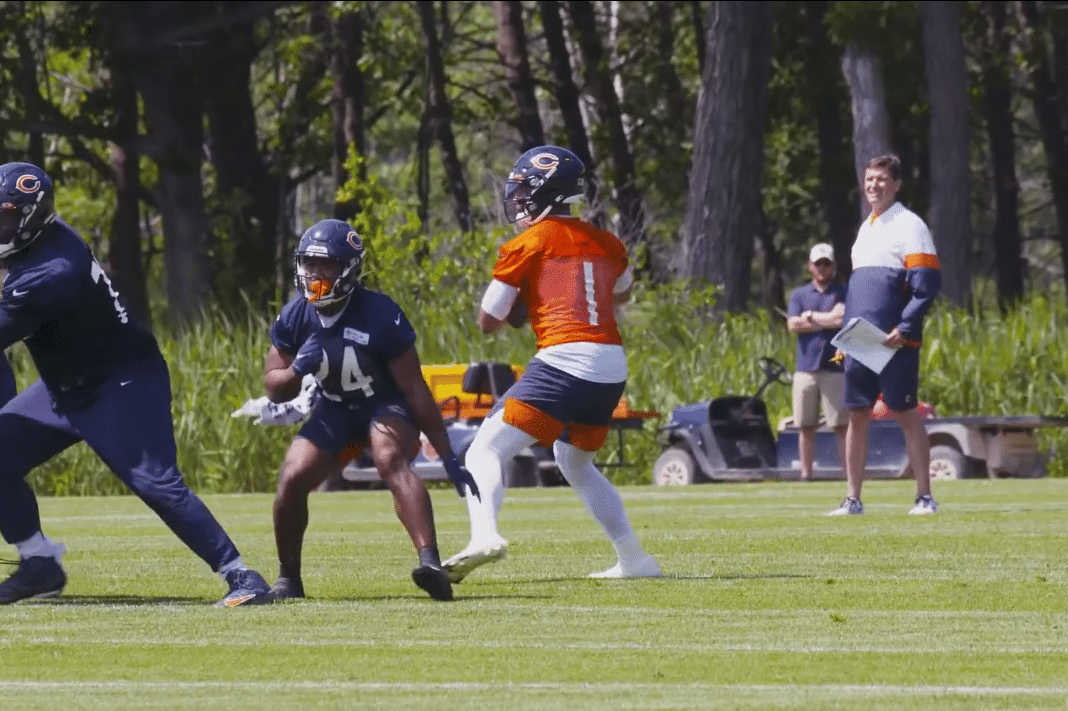 Allen Robinson has waited a long time for a viable quarterback to throw him the football. Somebody that isn’t a backup masquerading as a starter like Blake Bortles, Nick Foles, and now Mitch Trubisky. It is hoped that the arrival of Justin Fields has a chance to change that. The 11th overall pick is as talented as it gets with size, speed, athleticism, and a loaded right arm that can fire with precise accuracy.

Could his presence be enough to convince Robinson to stay with the Chicago Bears? That remains to be seen. Money is the primary issue as to why the wide receiver still hasn’t signed an extension. However, some theorize the 27-year old is holding back due to uncertainty with the Bears’ quarterback position. Perhaps the team is on their way to changing his mind. They gave their first taste of him and Robinson hooking up during the first day of mandatory minicamps.

It was a fun moment.

While nothing flashy, it demonstrated how easy Fields can make less-than-routine throws look. Robinson seemed to run a crossing route of about 10 yards. The quarterback hit him right in stride. No turning back for the ball or having to go high or low to get it. It went right between the numbers, allowing Robinson to continue running after the catch. The Bears are certainly hoping for more throws like that this year.

Fans may have to wait for Fields to be the one throwing them though. Head coach Matt Nagy made it clear again during his latest press conference that nothing has changed. Andy Dalton remains the starter. That was the plan even after Fields was drafted. The Bears want to take it slow with their prized draft pick. Give him time to absorb their complicated offense from the safety of the sideline.

Justin Fields will get his moment. It’s a matter of when

It’s not like Dalton is bowing in the face of this threat. He reportedly looked sharp in that same practice, torching the Bears defense twice with long balls to Marquise Goodwin. While Justin Fields has flashed his obvious talent plenty of times already, the belief is Dalton has looked like the more consistent and experienced quarterback. This is why he firmly remains QB1 going into the summer.

Anything can happen. Nagy always leaves the door open for such things. The rookie could explode in training camp and the preseason. Dalton could take a nosedive. There is no predicting such things. Until then, the coach is wisely sticking to a plan. Start the veteran. Let the rookie learn without taking hits. Hopefully, Dalton plays well and they can take their time. The more prepared Justin Fields is when he finally does start? The better.

It isn’t the normal practice these days. Most highly drafted QBs start right away. Teams just don’t have the patience to let them learn first. Nagy though saw the benefits of this approach with Patrick Mahomes in Kansas City. It has also worked a number of times in the past. All it takes is the fortitude to resist the outside pressure and trust ownership will let him do it his way.