Anybody who has watched the entire saga unfold has likely reached the same conclusion. There is no way Allen Robinson will be in Chicago beyond 2020. Whether it’s deleted Bears-related mentions on his social media to whipping his helmet into the bench on the sideline. The evidence is clear that the star receiver is not happy. This offense is one of the worst in franchise history. Why should he have any interest in sticking around for any amount of money?

He’s in his physical prime and doesn’t have a lot of peak years left. He has made it known countless times his interest is in winning a championship. With the Bears looking at a significant reboot on offense next year, he may not be interested in sticking around for that. This is why many fans are already bracing themselves for his inevitable exit.

Is it really that doom and gloom though?

Maybe not entirely. Rest assured it’s not good. Robinson seems like he’s all but checked out in terms of considering the idea of staying in Chicago. He’ll continue to do his job but that’s it. However, there are indications that he doesn’t necessarily want to leave. It is more an issue of the team is almost forcing him into that decision. Both by their unwillingness to pay him what he wants and puzzling usage on offense.

His agent Brandon Parker vented those frustrations on Twitter recently, calling the team out for their refusal to throw to Robinson in the red zone against Minnesota. This despite the receiver being by far their best contested-catch weapon. It seems like this fury isn’t directed at the players but more at the coaching staff. This evidenced by these comments on Nick Foles. 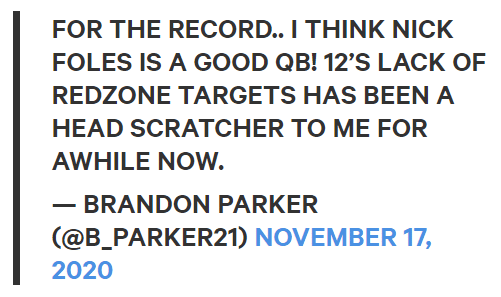 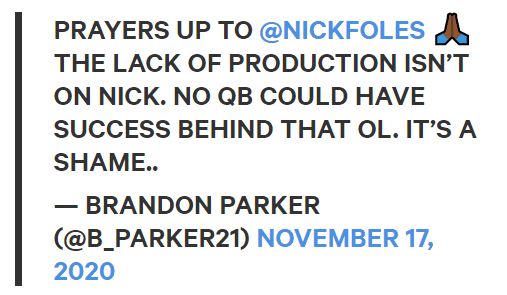 Does this offer hope Allen Robinson is salvageable?

Parker publicly supporting Foles is interesting. Robinson himself has stated his admiration for the veteran quarterback. That connection could prove crucial. Remember that Foles’ contract is structured to where cutting him in 2021 is impossible. So he’ll likely be on the roster next year and could end up being the starter again. That doesn’t have to be a bad thing. What it comes down to is if they can give him some help.

If they upgrade his protection and change up the coaching staff, could that be enough to entice Robinson to stick around? The Bears do have ways to buy time for making this sort of sale pitch. They can use their franchise tag on the receiver this coming offseason. It is projected to be around $15.3 million presuming the salary cap falls to the $175 million floor as anticipated. That would allow them to retain his rights for one more year.

They could use that time to sell him on their changes to the team.

Rest assured it is far from a guarantee. Allen Robinson has made his disdain for the franchise tag widely known. Would he decide to sit out the season? That feels unlikely but one can bet it would make bringing him back to the table difficult. Still, his liking of Foles and love of Chicago itself serve as pieces of hope that the situation is not completely irreparable. 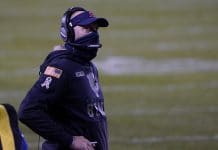