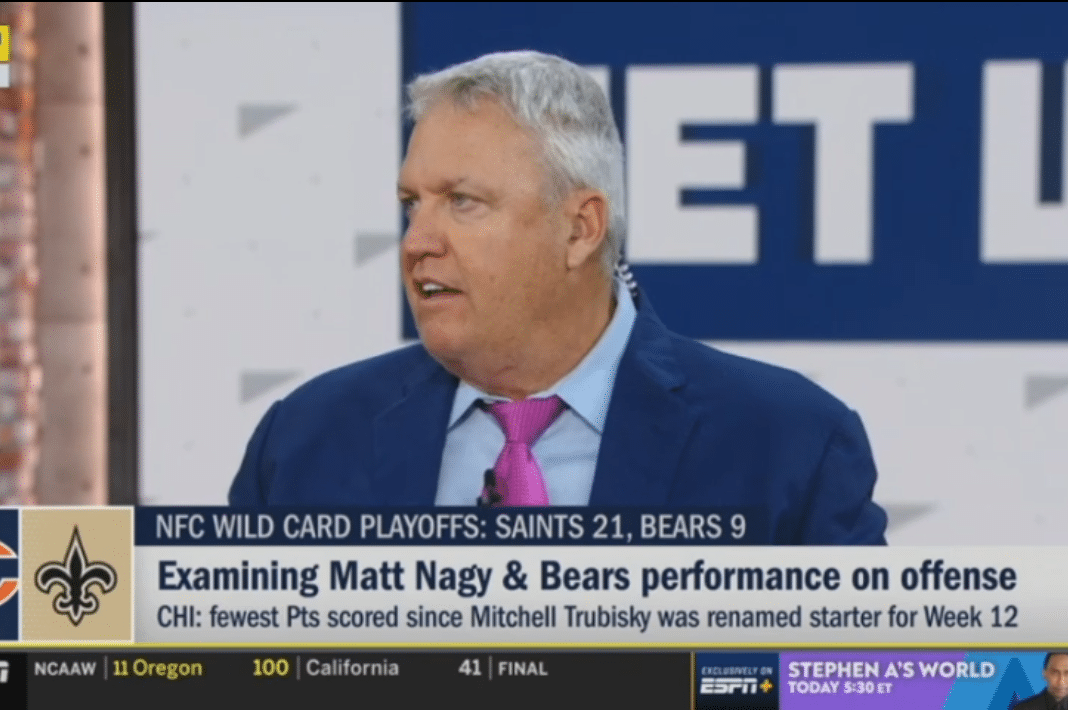 Matt Nagy has plenty of supporters even now. As Chicago Bears head coach, he’s yet to have a losing season and has now made the playoffs twice in three years. Surely that makes him one of the better coaches in the league, right? Not exactly. For one, Nagy’s teams have finished 8-8 in back-to-back seasons. His offense hasn’t yet cracked the top 20 in the NFL rankings in three years. Also after a 5-1 start this year, the Bears finished 3-8 the rest of the way. Rex Ryan doesn’t understand what all the fuss is about.

The former New York Jets and Buffalo Bills head coach had plenty to say following the Bears’ loss to the Saints in New Orleans. While he never understood the hype around Nagy, one thing that has stood out about him the most? How willing the coach is to let all of the blame for the troubles on offense fall on Mitch Trubisky. In Ryan’s mind, the job of the head coach is to take the heat for his players. Nagy doesn’t do that.

Facts are facts. Nagy doesn’t have much going in his favor.

Being able to rally just enough to sneak into the playoffs probably gave George McCaskey a moment of pause on the idea of firing him. That and the fact the head coach has two years left on his contract. Yet the stats are pretty ugly. In 18 of the 50 games he’s coached, the Bears have scored one touchdown or less. Remember this guy was supposed to be an offensive guru. Yet everything points to being anything but that.

Both of his QB projects have failed. Trubisky had some good moments in 2018 but has regressed to mostly average in 2019 and 2020. The running game? It’s ranked 27th and 25th the past two years. The list goes on.

Rex Ryan is correct. What does Nagy offer?

People talk about him being a good CEO type with high leadership qualities. Yet time has shown that the man can’t help but meddle in things. Especially on offense. He handed play calling duties to Bill Lazor back in November and things seemed to improve after a few weeks. However, towards the end of the season, it became apparent a lot of the old tendencies they had come back. Right around the time, it was revealed Nagy was giving more input on play-calling.

Then the Bears offense manages three points in 59 minutes against the Saints before being allowed a mercy score with seconds left. Rex Ryan knows football. People can call him a blowhard and all that. The guy has lived football his entire life. He’s learned from some great people. When he says he has little respect for Nagy, it is probably a good idea to listen.

He may get another year in Chicago, but that doesn’t mean he deserves it.

The guy came around at the right time. He inherited an elite defense that has made his life easy. Their reward was two one-and-done playoff exits in which the offense managed 25 points combined in those games. Matt Nagy seems like a good guy who understands leadership. It takes a lot more than to be a good NFL head coach though.