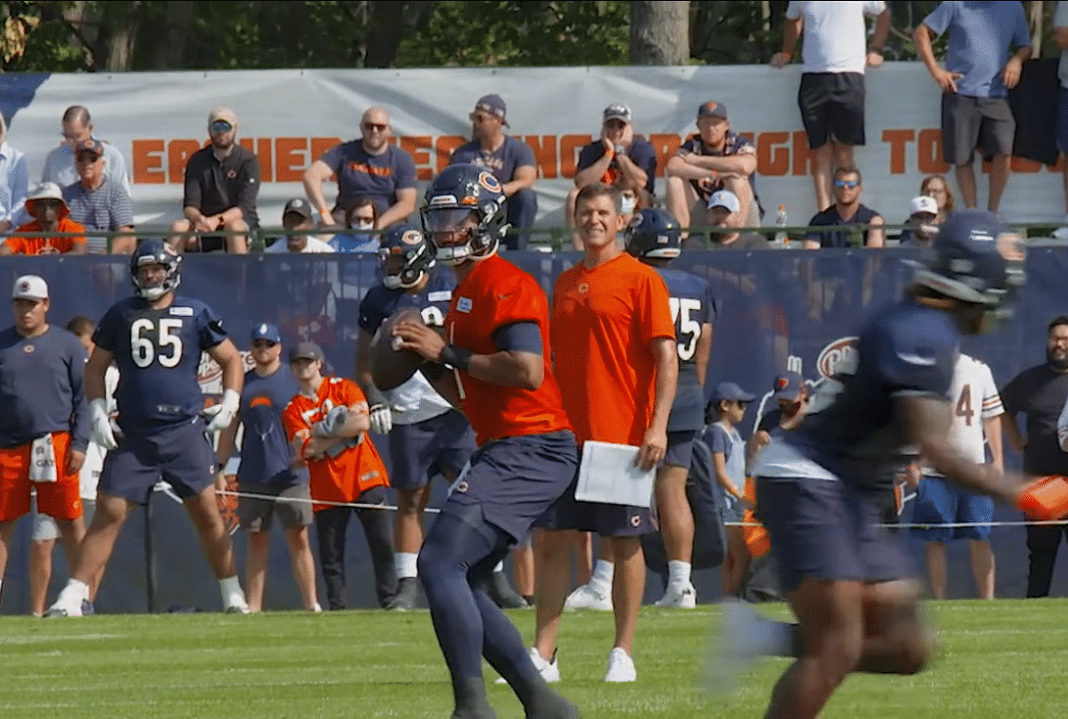 Teams can make all sorts of primary and secondary plans for an offseason when it comes to solving their roster problems. At the end of the day, sometimes it comes down to blind luck that they end up accomplishing their goals. The Chicago Bears were no different this year. They attempted a number of different moves at the quarterback position. Most of which failed to materialize. It wasn’t until the 1st round of the draft that things finally came together, enabling them to secure Justin Fields.

Even at the time, it felt like the Bears got exceedingly lucky. So many things had to go right. Evaluators cooling on Fields in favor of other QBs. Odd rumors surfacing about his work ethic. Last but not least, supposed quarterback-needy teams in the top 10 passing on him in favor of other positions. Or so we thought. It turns out there is a little extra to the story according to Albert Breer of the MMQB.

The fact that GM Ryan Pace set a limit on how high he was willing to move up.

“Pace had set 11–12 as the range to which he’d be willing to jump if the right quarterback were to start sliding down the board. Nagy told Dalton that it might happen, it might not, but he at least wanted him to be aware.

You know the rest. Justin Fields did slip. Pace did get aggressive. Dalton got a new neighbor in the quarterback room, one the team gave up two first-round picks (plus a ’21 sixth-rounder and a ’22 fourth-rounder) to get.”

It’s known at this point that the Bears did place calls going into the draft to teams in the top 10. However, it is clear with this that Pace realized the asking prices were too high. As much as he wanted a new quarterback just like everybody else, he didn’t want to get overly reckless with that pursuit. No doubt having learned his lesson from the Mitch Trubisky affair quite well.

So he set the limit and silently prayed the football gods would grant him their blessing. When Fields fell to #11, there was genuine surprise at Halas Hall. Pace called up his old friend Dave Gettleman, GM of the New York Giants who held the pick. After some tense discussions, an agreement was reached. Fields was going to be a Bear.

Not since the blockbuster trade for Jay Cutler have they been this invested in everything a single player is doing on and off the field. That should give people an idea of how quarterback-starved this city has been. The best part is Fields hasn’t shrunk from the attention. He’s taking it in stride, understanding it just comes with the territory. All the while he continues to show steady improvement.

His August 2nd practice at training camp was probably the best since his arrival in Chicago. Several standout moments including a 39-yard TD, a big throw over the middle while running to his left, and three big scrambles for 1st downs using his legs. It was a perfect encapsulation of all the things he can do. He even didn’t throw an interception during the session.

Something Mitch Trubisky had a habit of doing even on good days.

Given where things stand? The Bears seem grateful things worked out the way they did. It isn’t fun thinking about where this team would be right now if Justin Fields hadn’t fallen that day in April. Fans no doubt would be trying to talk themselves into Andy Dalton as the answer. A conversation they’ve had way too many times in the past.