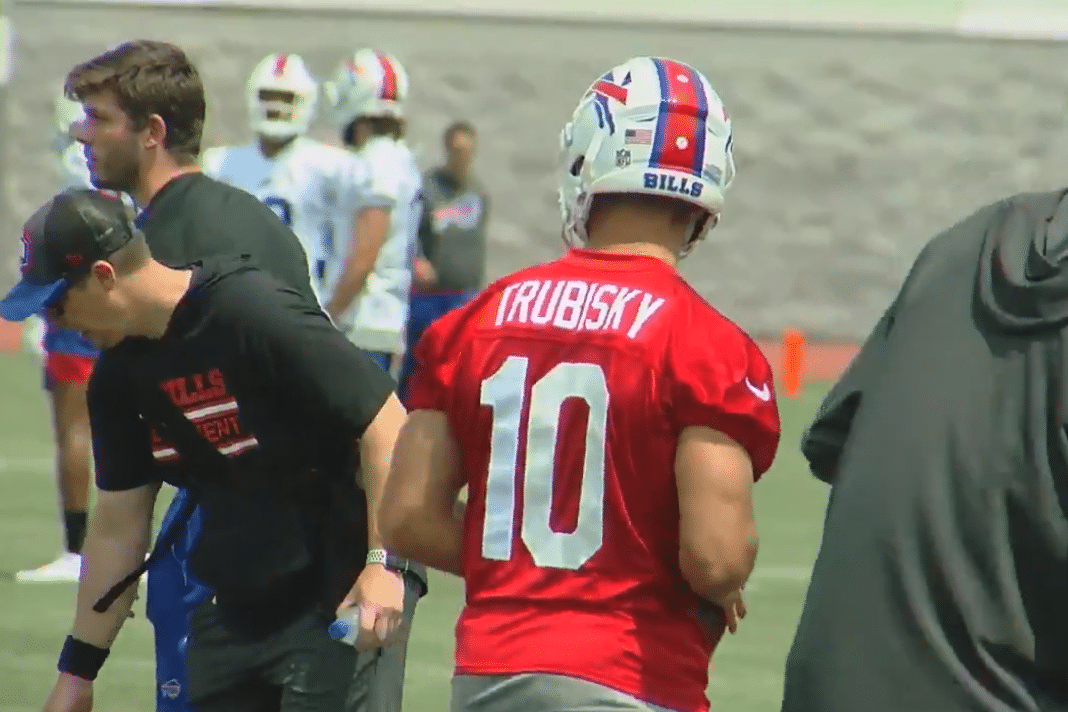 Mitch Trubisky had four seasons with the Chicago Bears. They were certainly unique, featuring some unexpected highs and some spectacular lows. Throwing six touchdowns against Tampa Bay in 2018. Then putting up just three points against Green Bay barely a year later. Engineering a huge comeback in Detroit last year and then losing his job to Nick Foles in Atlanta two weeks later.

The guy was so contradicting at times. He made it so easy to cheer for him one moment and so easy to boo him the next. His lack of consistency played a huge part in the franchise eventually deciding to part ways this offseason. Even so, it was still a move that caught a lot of people by surprise. Many were convinced after Trubisky’s late-season surge to help the Bears make the playoffs that they’d bring him back for one more run.

Then another team was certain to pick him up and correct whatever problems there were and transform him into an effective starter. As it turns out? Trubisky was hoping for the same thing. While he is happy to be the newest member of the Buffalo Bills quarterback room, the 26-year old admitted it wasn’t his first choice. This during an interview with Jay Skurski of the Buffalo News.

MT: “…It definitely wasn’t what I was expecting, but I think it will be a great part of my journey. I’m just excited to be here and be a part of this team.”

BN: When you say it wasn’t what you were expecting, do you mean the opportunity to sign in Buffalo?

MT: “Right. I was hopefully looking for an opportunity to go compete somewhere and maybe get a starter spot somewhere, but coming here and backing up Josh is going to be a new role, but I’m ready to embrace that and be a part of this great team and help any way I can.”

One can understand why Trubisky was somewhat surprised. Here is a former #2 overall pick from 2017. He helped his prior team to the playoffs twice and was even a Pro Bowl alternate in 2018. One would think a team would be willing to give him a shot at competing for a starting job at least. That nobody did and he had to settle for a backup role behind Josh Allen for $2.5 million says a lot.

Keep in mind the Carolina Panthers thought trading for Sam Darnold was a better idea than signing Trubisky. This despite clear evidence the latter has been a better quarterback to this point. Washington went with a 39-year old Ryan Fitzpatrick. New England stuck by a dead-armed Cam Newton. There were a number of teams that had enough motivation to at least given him an opportunity.

For all the people quick to blame Matt Nagy for the constant struggles Mitch Trubisky went through, it would seem the rest of the NFL doesn’t buy that narrative. They seem to think the Bears got as much out of him as they possibly could. QB-friendly coaching staff. A star receiver in Allen Robinson. A top 10 defense to lean on. If he couldn’t ascend despite such advantage?

Then the odds don’t favor it ever happening.

Maybe a stint in Buffalo learning behind Allen will do him good. The two share similar skillsets. Truth be told, his best opportunity to grab another starting job may have passed him by. Unless Allen gets hurt, he could be in store for a long career ahead as a backup. There is no shame in that, but it serves as a brutal reminder of how swiftly the league can forget about you if you don’t live up to expectations.