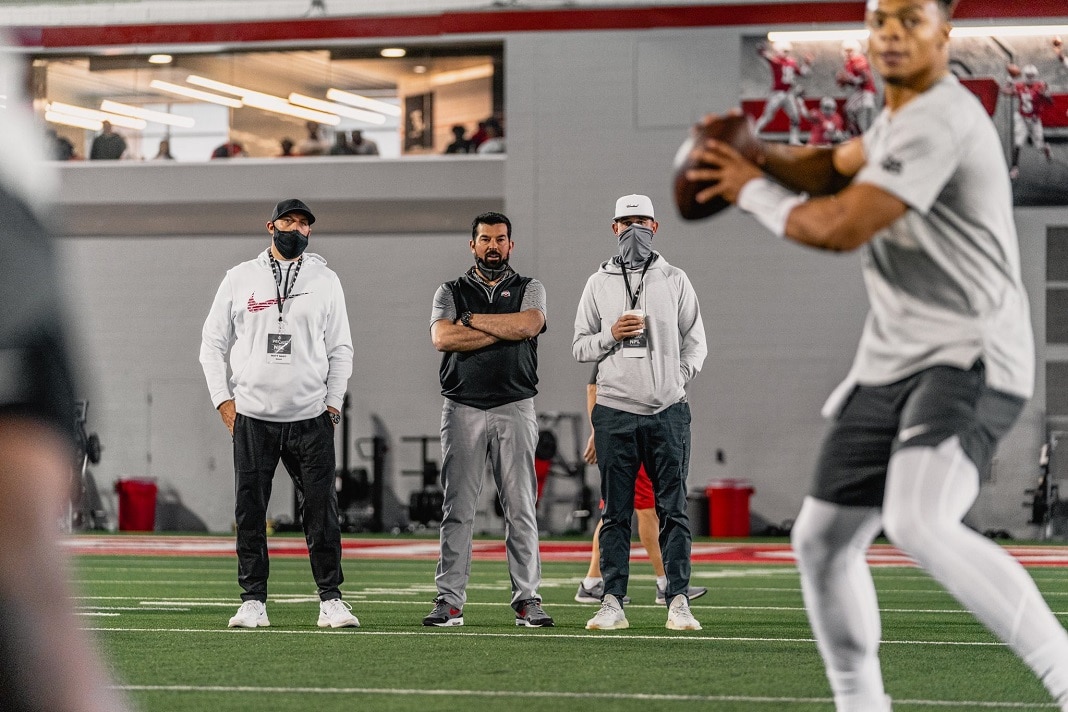 Chicago and Bears’ fans have been buzzing following the NFL Draft this past weekend in which the team selected Ohio State quarterback Justin Fields eleventh overall. Since Thursday night, the optimism surrounding the Bears’ future has done a complete 180 as many believe Chicago at long last has their franchise quarterback. Fields will be coming into a situation that is the polar opposite of what the Bears’ previous first-round quarterback selection in Mitchell Trubisky had in 2017.

A Lot Was Asked Of Trubisky Without Much Being Given To Help Him Succeed.

When the Bears selected Trubisky second overall in the 2017 NFL Draft, the selection garnered both shock and confusion. No one analyst or mock draft had Chicago trading up from third to second to draft the North Carolina quarterback. Furthermore, the fans heavily criticized the selection due to their wanting of other quarterback prospects, including Deshaun Watson and Patrick Mahomes. General manager Ryan Pace was heavily criticized as he traded up one spot to draft Trubisky out of fear of another team trading up to select him.

After the draft, it would get worse for Trubisky. The rookie quarterback was disliked by most fans until the time he took the field for his first preseason game. The coaching situation was not the greatest as Trubisky was drafted by a defensive-minded head coach whose offensive coordinator had been questioned heavily in 2016 for his lack of offensive creativity. Many fans and NFL experts worried that Trubisky’s growth would be limited by offensive coordinator Dowell Loggains.

The other troubling aspect to Trubisky’s rookie season was the offensive talent surrounding him. When he was drafted by the Bears, many experts believed it was best for him to sit the entire season as he was the most unready of the three first-round quarterbacks. The team had signed a bridge quarterback to start 2017 in Mike Glennon. Glennon had started 18 games for the Tampa Bay Buccaneers from 2013 to 2016 and had shown potential promise. The problem was that the former Buccaneers quarterback struggled as the Bears’ quarterback in 2017 as he was sacked eight times and threw five interceptions in four starts.

Trubisky was forced to start by week five as head coach John Fox’s job was on the line if the Bears failed to make the playoffs in 2017. To make matters worse for the rookie quarterback, he had no quality wide receivers to throw to. The Bears had lost Pro Bowl receiver Alshon Jeffery to free agency while their projected Opening Day starters in Kevin White and Cameron Meredith were on injured reserve for the remainder of the season after week 1. After tight end Zach Miller suffered a career-ending knee injury in week eight against the New Orleans Saints, leaving the Bears with several inexperienced players at the wide receiver and tight end position.

Many view Trubisky’s rookie season as a waste due to the lack of coaching and offensive talent that surrounded him. Fox and his staff were fired a day after the season ended due to poor performance, while Pace spent the 2018 offseason finding an offensive coaching staff and talent to surround his quarterback. White and Josh Bellamy were the only wide receivers held over from the 2017 team as the rest were released. Trubisky was forced into starting before he was ready, and when he did start, the quarterback had no resources around to help him.

Everything that wasn’t there for Trubisky in 2017, Fields will have as a rookie in 2021 with the Bears. The Ohio State quarterback is already loved by a majority, if not by all Bears fans. Immediately following the Bears’ selection on Thursday Night, Fans at the White Sox game began chanting Fields’ name. Many experts and analysts spent a good portion of the weekend’s draft coverage praising the Bears’ selection and applauding Pace’s bold move to trade up for a quarterback.

Fans started celebrating at the White Sox game after the Bears traded up to take Justin Fields. 😅 🙌

Unlike Trubisky, Fields will not be forced into starting earlier than suppose to, as Chicago has a better bridge quarterback in place than in 2017. Dalton is a proven NFL quarterback who has been named to multiple Pro Bowls and has led the Cincinnati Bengals to numerous playoff appearances. The 10-year veteran will give the Bears a chance to win, and a change at the quarterback position will take place only when Fields is ready to start.

The most significant difference between Fields’ and Trubisky’s rookie seasons will be the talent level of the wide receivers and tight ends. The Bears lost their Pro Bowl wide receiver in Jeffery after 2016, while this offseason, the team was able to retain receiver Allen Robinson for at least one more year. Robinson has had back-to-back 1,000 yard receiving seasons and will be pair with second-year receiver Darnell Mooney, who set the Bears’ rookie receptions record in 2020. Chicago will also have two quality tight ends in Cole Kmet and Jimmy Graham while featuring dual-threat running back David Montgomery. In Trubisky’s rookie season of 2017, Chicago’s lone offensive threat was running back Jordan Howard.

Allen Robinson asked about his updated feelings on the franchise tag. “I’m in a good place at this time.” Robinson also spoke of goals like the playoffs and doing things that have never been done with the Bears. (Presumably WR records)

When drafting a first-round quarterback, an NFL franchise needs to give the quarterback the best environment to succeed. There have been too many instances where first-round quarterbacks have failed due to no fault of their own. The teams that draft them either rush them into starting before they are ready or do not give them enough coaching of offensive resources to succeed. Four years ago, Trubisky came into a less than ideal situation for any quarterback, and his rookie season was wasted. Fields, on the other hand, is coming into a situation that may be almost perfect for a rookie quarterback.