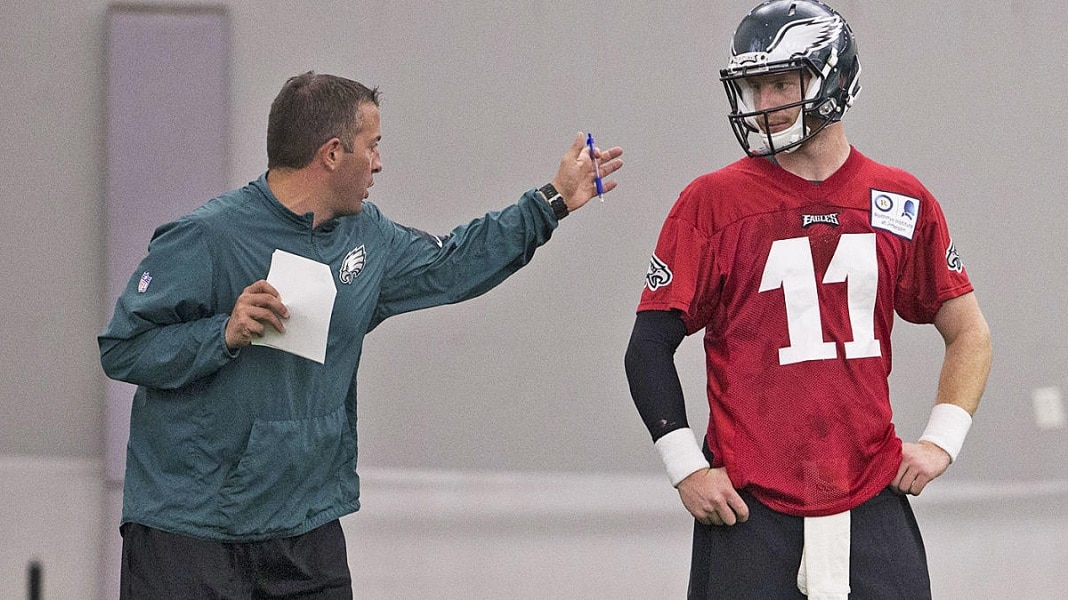 The Chicago Bears remain the dark horse of the NFL quarterback market. They’re connected to everything but continue to move in the shadows. Nobody knows what they are planning. GM Ryan Pace and head coach Matt Nagy have kept their cards close to the vest. Nothing proves it more than the recent Carson Wentz situation. After weeks of thinking the Bears had the best offer on the table for the ex-Eagles QB, it was revealed they never made one to begin with. This despite the efforts of John DeFilippo.

The Bears quarterbacks coach is feeling pretty good these days. He just got a promotion to passing game coordinator which likely gives him more stroke in offensive decisions. When the Wentz trade buzz picked up, everybody knew he was going to be involved. The man had coached the former Pro Bowler for two years in 2016 and 2017. He’d helped get the best out of the quarterback. It made sense he’d be viewed as a key factor in any deal. In fact, according to Albert Breer of the MMQB, DeFilippo insisted to the team that he could fix Wentz’s issue if given the opportunity.

In the end, the Bears decided to pass.

“Meanwhile, DeFilippo, now the Bears’ pass-game coordinator, who had been charged with working with Wentz on mechanics in Philly, communicated to the Chicago brass that he believed Wentz was fixable, and gave the team his institutional knowledge on the player and person.

The result: After monitoring the situation for a period of weeks, a combination of factors kept the Bears from making it to the stage where they put an offer in front of Roseman.”

There are plenty of reasons why Chicago likely did this. It starts with the contract. The Bears are already over the salary cap before the new league year even begins. Saddling themselves with a $34 million hit from Wentz’s deal would’ve forced them to make some tough payroll decisions. That likely includes sacrificing a couple of prominent members of the defense. Something they’d prefer to avoid.

Then there were the questions of his coachability and durability. Wentz had a major falling out with former Eagles head coach Doug Pederson in 2020. Something that led to the Super Bowl winner being fired. On top of that, the 28-year old has already seen his season end three different times due to various injuries. The Bears would’ve been sacrificing a lot for a huge gamble. It’s commendable they kept their composure and decided to pass.

John DeFilippo should be a big help in Bears QB search

He actually has a lot of experience being on teams that have acquired quarterbacks in the past. He’s also seen them conduct their searches in the right and wrong ways. He was with the Oakland Raiders when they drafted JaMarcus Russell 1st overall in 2007 and again in 2014 when they took Derek Carr. He was in New York when the Jets traded up for Mark Sanchez and in Philadelphia when the Eagles did the same for Wentz.

Last but not least, he was in Jacksonville when the Jaguars signed Nick Foles to a huge contract and then drafted Gardner Minshew in the 6th round. This guy could be an invaluable resource to help the Bears navigate a dangerous quarterback market. One that will likely make or break the team in 2021. Bypassing Wentz was likely difficult, but probably a good decision. John DeFilippo’s insight played a key role in that.

All Bears fans can do is keep waiting.

Nobody knows what the big move will be. The only thing known for sure is that it’s coming. The rumors will continue to fly until that happens. Waiting is the hardest part. Can Pace and Nagy make the right decision? They’d be the first to do so in a long, long time for this franchise. A lot of people don’t think they have the wherewithal or the resources to make it happen.