The NFL Players Association continues to insist they’re doing what is best for the players. Yet that doesn’t seem to be the case. At least not in the minds of several high-profile players. More than a few voiced their displeasure about the recent Collective Bargaining Agreement and how little of a fight the NFLPA put up to get more favorable concessions. It appears those frustrations have only festered since the deal was struck. Just ask Jimmy Graham and Eddie Jackson.

Both prominent Chicago Bears starters called out the NFLPA for being useless within less than 30 minutes of each other. Jackson struck first. His beef centers around the recent announcement of Performance-Based Payouts by the league. This is when teams hand out $8.5 million to players based on playing time and salary. It’s a great opportunity to earn some extra cash. However, because of the pandemic, the NFL elected to defer those payments to 2024. Jackson is not happy about that. 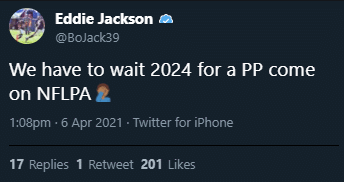 It’s not hard to understand why he’s upset. Jackson was looking at $172,823 in additional money for last year. Yet the two guys who should be the angriest are Germain Ifedi and Darnell Mooney. Ifedi earned over $570,000 for starting at guard and tackle while Mooney pulled in an extra $419,000. Considering he’s on a 5th round rookie contract? That is a lot of extra scratch he won’t get to see for a long time.

His annoyance stems from how non-communicative the NFLPA has been about the structure of the upcoming offseason. Players are still in the dark about when they need to report. Never mind the fact that he hates how easily they rolled over on the idea of a 17-game season. Something few of the players actually wanted. Now he has to deal with their incompetence in keeping people informed as well.

@NFLPA I’ve been searching for an answer on the off-season that starts in 2 weeks for over a month now. Can u answer the phone and supply me or my agent with facts. We dropped the ball on 17 games, can I Atleast get an answer about the off-season so I can schedule my life. #80 📲

Jimmy Graham and Eddie Jackson are right to feel outraged

It feels like the NFL owners have truly controlled the entire sequence of negotiations since the CBA needed renewing. They understood exactly which part of the player base to target with incentives. That being the lower third who know they likely aren’t going to last too long in the league and need to make as much money as possible. With a considerable bump in pay for them, the owners got the votes they wanted to get the deal ratified.

The NFLPA has done little to stymie any of their big initiatives. The 17-game season is the latest. While it does mean more money for the players, it also means more wear and tear on their bodies. Careers have a hard time lasting too long with a 16-game schedule. Now they have added another game on top of it. Not to mention the expanded playoff format that forces all but two teams to play four games to win a Super Bowl in the postseason.

That is a lot of football.

And people wonder why more and more players are choosing to retire early. In their minds, neither the NFL nor the NFLPA is truly looking out for their best interests. It looks like only a change in leadership could lead to more favorable outcomes in the future. Richard Sherman and Allen Robinson seem like two guys who might be ideal candidates for such a position down the line.