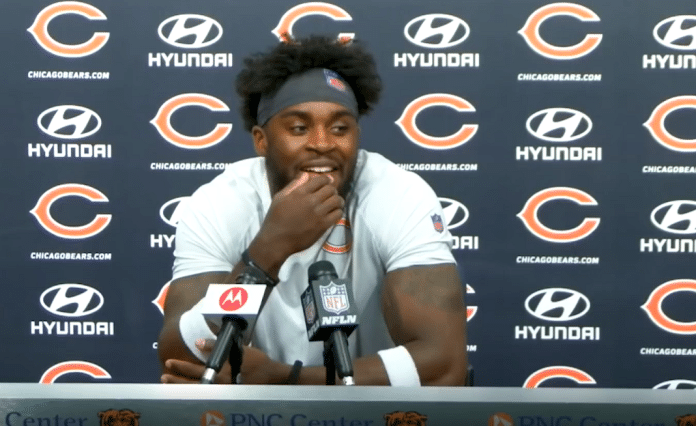 Jaylon Johnson has been one of the Chicago Bears‘ best players through the first six games. His play is a key reason the team once again has a top 10 defense. A true cover corner who is playing like a Pro Bowler. One thing that has also stood out about him is his model attitude. A tireless worker who avoids controversy whenever possible. However, that was not the case this week.

Johnson made significant ripples when he posted a picture on Instagram. It was of a letter he’d received from the Bears telling him he’d been fined for being late to the team facility. Clearly, he didn’t feel it was justified since he arrived so close to the actual deadline. The cornerback stated to the media on Friday that the post was meant as a joke among his friends. It didn’t take long for him to realize that things like this can be taken way out of context fast on social media. The picture blew up on Twitter and created an unnecessary distraction just days ahead of the Bears’ big rematch with Tom Brady and the Buccaneers.

To his credit, the second-year man owned up to his mistake.

Head coach Matt Nagy got the news of the post during his own press conference the day before. He admitted he hadn’t seen it and would talk to Johnson about it. They did indeed meet and from what the cornerback said it went well. A lesson was learned. For one, don’t put up posts on social media you know have a chance to get taken the wrong way. Two? If you have any gripe with team policy or anything else, keep it in-house.

If nothing else, it’s just nice to hear there isn’t actually a problem between him and the organization. The last thing the Bears need is one of their best players being disgruntled.

Jaylon Johnson has a big challenge ahead of him

The Bears defense will be the latest to try slowing down Brady who is playing one of his best seasons at age 44. A big part of that success is his vast arsenal of weapons. The good news is he won’t have all of them for this game. Rob Gronkowski and Antonio Brown are both out with injuries. This likely means Johnson will either draw the assignment of covering Mike Evans or Chris Godwin.

Given the trend of his usage lately? It’s a safe bet to be the former. Evans leads Tampa Bay in both receiving yards (420) and touchdowns (4). With Brown and Gronk out, Brady is likely to lean on him more than ever. If Jaylon Johnson can slow the three-time Pro Bowler down? It might significantly improve the Bears’ chances of pulling off an upset.

None of it will be easy.

The last two visits Chicago paid to that stadium ended in rather ugly blowouts. Granted, they were a much worse team back in 2016 and 2017. Still, these are the defending Super Bowl champs. It is going to take a great performance across the board to beat them. Johnson especially.