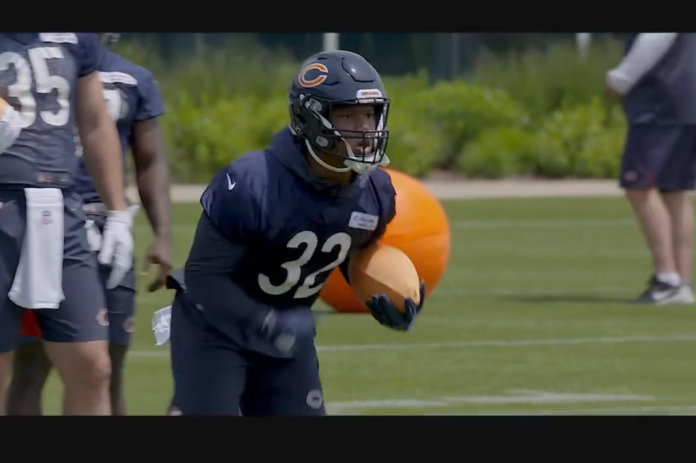 By almost any evaluation, David Montgomery had a successful season in 2020. He had 1,508 yards from scrimmage and scored 10 touchdowns. By comparison? Only four of Matt Forte’s 10 career seasons were better than that. A surefire sign the former 3rd round pick really started coming into his own as a weapon in this offense. The fact he did it with less than adequate blocking most of the time and inconsistent quarterback play? That makes it all the more impressive.

Yet when it comes to his own thoughts? Montgomery isn’t happy with last year. He feels he could’ve and should’ve done more. There is a lot of “untapped potential” as he called it in his game. To that end, he’s put in more time and effort than ever before in his offseason preparation. One thing he decided to embrace? A change in his running style. To that end, he got in contact with a man by the name of Chris Korfist.

Korfist is a renowned trainer with a specialty in sprinting.

He runs a place called Slow Guy Speed School. His training regimen has helped produce a bevy of award-winning sprinters across the country. Enough to where he’s consulted with NFL teams, the U.S. Olympic team, and even U.S. Special Forces. Montgomery claims he thought he understood how to run properly. Korfist informed him he was dead wrong. The changes he’s seen in the past few months have been eye-opening. Just don’t ask what the secret is.

A nice reminder that beneath his typical stoic appearance, Montgomery has a sense of humor. Whatever the secret may be, he is happy with the results thus far. Bears media seemed to notice a difference even in early OTA practices. It is nice to see the third-year player isn’t content with being good. His goal is to be great.

Will David Montgomery still be the focal point though?

While there is no doubt he is still RB1 in this offense, the Bears’ offseason moves suggest he may not get the same heavy workload he did last year. They signed ex-Super Bowl hero Damien Williams in free agency. Then they drafted Khalil Herbert in the 6th round. Combine this with a returning Tarik Cohen? It is fair to wonder how much sustained action Montgomery will see. Head coach Matt Nagy has a tendency to alternate his running backs.

Some will see this as a positive development. It means everybody will stay fresh during games, leading to more big plays. Somebody like David Montgomery though? He won’t like it. He always wants the ball. The more you feed him, the better he plays. That was proven in the second half of last season when the Bears really began to lean on him with an average of 19 carries per game.

The offense topped 25 points or more in five straight games.

It seems Montgomery is intent on proving he doesn’t need help. He is capable of being a complete back. Somebody who never has to leave the field regardless of down or situation. This is undoubtedly a big part of why the Bears traded up for him in 2019. They saw the desire in his eye. Now it all seems to be coming to fruition.