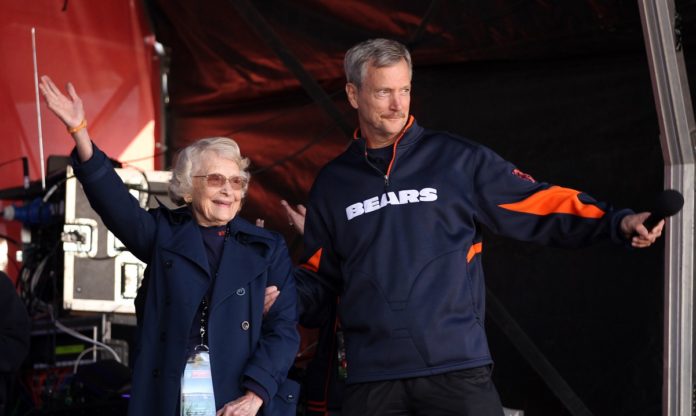 Chicago Bears ownership has always tried to put forward a front of unity. One built around a simple line. Keep it in the family. George Halas built this franchise from nothing back in the 1920s. After his death in 1983, his daughter Virginia McCaskey did everything in her power to keep it under the majority control of the Halas bloodline. Yet as time has gone on, a persistent question remains. What will happen after Mrs. McCaskey passes away?

It is a morbid thought to be sure, but also an inescapable question. Her son George McCaskey has made it clear there are zero chances of the family selling the Bears. Yet the reality is it may not be his call. According to Jim O’Donnell of the Daily Herald, there is a lot of tension behind the scenes at Halas Hall. It appears a number of McCaskey family members aren’t interested in owning the team anymore. They wish to sell.

The most striking reply came from an individual with exceptional knowledge of the working dynamic within the McCaskey family.

That person said: “There is some internal strife going on among family members to sell … now.”

The reality is many of the younger McCaskey generation want out. They’ve continued to abide by the wishes of the family matriarch but there is a genuine concern that a push could be made to sell once she is gone. George may not have the wherewithal nor the necessary stroke to stop it. A chance to own a landmark franchise like the Bears would undoubtedly draw the interest of several buyers.

O’Donnell though believes three possible names appear the most likely.

If the sale of the Bears is announced in the weeks ahead, there are three suitors who loom larger than all others — Pat Ryan, Jeff Bezos and Neil Bluhm.

Ryan, 83, is the favorite. The billionaire businessman — in partnership with 91-year-old Andy McKenna — owns 19.7% of the Bears. He also holds the right-of-first-refusal as “primary investor” if any of the McCaskey stock comes up for sale…

…No man is as well-positioned to bring the Bears to Arlington Park as Bluhm, 82.

He is the individual most responsible for steamrolling CDI on to the Illinois casino scape via its purchase of 61% of Rivers in the fall of 2018. Churchill Downs chairman Bill Carstanjen owes him…

…The inclusion of Bezos — Amazon’s $200 billion man — is automatic on any list of NFL teams rumored to be circling the sales ring.

But it seems that the NFL wants the 57-year-old futurist more than Bezos wants the NFL.

Rumors have persisted for years that the Bears might be looking at a move out to the suburbs in Arlington Park. There are plenty of financial incentives for such an idea. Bluhm is an easy choice if that is the driving ambition for the organization. Though Bezos with his unbelievably deep pockets could pull it off as well. Ryan? He likely could do it but it’s not certain if he would. Either way, it appears the idea of an expiration date on McCaskey ownership is real.

Chicago Bears ownership has seemed behind the times

For all the good intentions the McCaskey family has, they just don’t seem to grasp how to run a successful NFL organization. As evidenced by just seven playoff appearances since 1992. Other franchises have routinely looked like they are just one or two steps ahead of the Bears in how to properly structure a successful blueprint for the modern league. Many feel some fresh blood with new ideas is needed to truly change things.

Then again change isn’t always good. There is a legitimate possibility the next version of Chicago Bears ownership is more incompetent than this one. The grass isn’t always greener as the saying goes. Truth be told this reckoning was coming for a long time. Having so many family members involved in owning shares of this team made a power struggle inevitable.

Can the old guard withstand the assault?

George McCaskey seems like a resolute enough man. He’ll need that for what is coming. When Virginia does finally pass, she won’t be able to keep the masses in line anymore. Either he will step up to maintain what his grandfather built or ultimately be forced to sell. One can only imagine how much money will be involved should that happen.