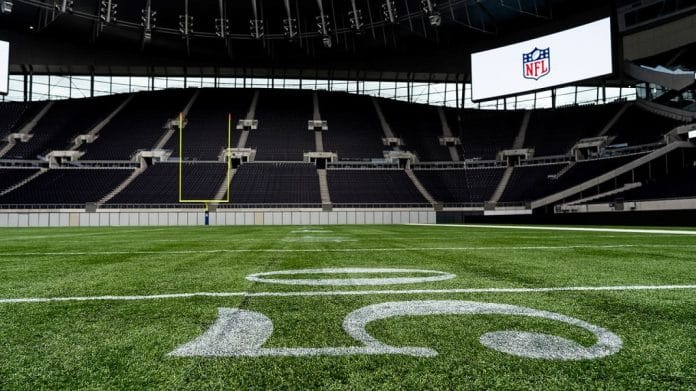 The Chicago Bears caused a ton of waves in the national spotlight when they placed a bid to buy Arlington International Racecourse during the summer. After weeks of anticipation, it was revealed that they’d won the bid and are now in the process of completing the purchase. Once they claim ownership of the 326-acre property, they are free to do with it whatever they wish. Most are assuming the obvious.

The McCaskey family aims to build a brand new stadium. One that they would have primary ownership over, finally ending the many decades of leasing their homes from Wrigley Field to Soldier Field. While many hurdles remain before the Bears reach that point, there is one question that fans are interested to find an answer to. If and when the team does get into a new building, what are they going to call it?

This is kind of a big deal.

The Bears haven’t played in a new stadium since 1971. No doubt many are wondering what they will do. Will they seek to name the building themselves or will they go the common route? This is by selling the naming rights to a company for a healthy sum. This would be a way to help pay for the construction. A recent Daily Herald report from Jim O’Donnell revealed that George McCaskey and Ted Phillips toured the property earlier this month. It was here he seemed to casually drop the possible working name of the new stadium.

“Bears chairman George McCaskey and president Ted Phillips were given a full tour of the 326 acres, including areas of the backstretch neither had reportedly ever seen live and up close before.

As expected, plans are evolving in which the new George S. Halas Stadium will be located in the northwest portion of the trapezoid, near Northwest Highway and Route 53.”

If this is the actual idea the Bears are going with? That is 100% awesome. Naming the stadium after the founder of the franchise is straight perfection. A fitting tribute to Papa Bear and all he built. Not to mention it would also be rather poetic since he was the one who wanted to get out of Soldier Field initially but was never able to.

Obviously, it’s not 100% confirmed but this offers hope that the McCaskeys aren’t going to completely sell out in regards to this stadium project. If nothing else, they’ve always kept the history of the franchise close to their hearts. Remember that Virginia McCaskey still runs the show. It would make perfect sense for her to spearhead the effort to name the new building after her late father. The one who got her to fall in love with football so many decades ago.

Going to games at George S. Halas stadium would be awesome. Something the traditionalist fans could sink their teeth into. Besides, it’s not like the Chicago Bears would struggle to get the necessary funds for this project. They don’t have to sell the naming rights. Is it lucrative? Sure. SoFi Stadium in Los Angeles costs $30 million a year. So the incentive is there, but the organization will have so many other ways to make money.

This is one sacrifice they can afford to make.

One that will do a ton of great PR with their fanbase. In the end, there are years left to go before this conversation gets serious. The Bears are still in the infant stages of this process. They must design the stadium and surrounding village. Reach agreements with so many entities in the community. Get out of the Soldier Field lease. This will take time. If it is true? Then the positive vibes just increased.