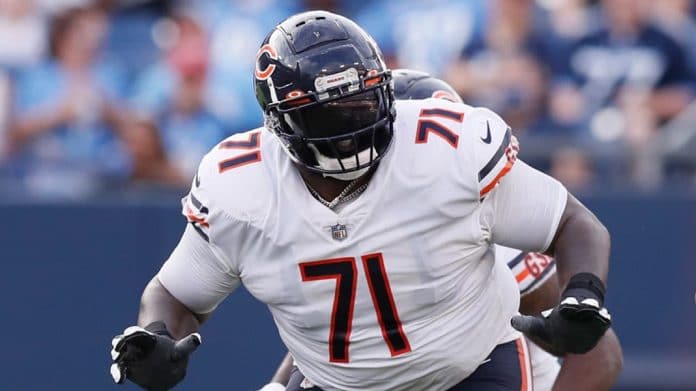 Justin Fields is making progress early this season. Khalil Herbert has suddenly become a major factor in the running game. Even Khyiris Tonga has helped out on the defensive line. The Chicago Bears 2021 draft class is contributing. Sadly two of their key players haven’t been part of it. Second round pick Teven Jenkins and 5th round pick Larry Borom have both missed extensive time with injuries. That hasn’t discouraged the team. They’ve been on top of those two every week, with a lot of help from Jason Peters.

The 39-year old former All-Pro was viewed as little more than an emergency option when Chicago signed him. He was literally fishing when offensive line coach Juan Castillo gave him a call. The fact that he is not only playing but now a key component of the 7th-best running game in the NFL? That speaks to his immense talent and why he will end up in the Hall of Fame.

However, Peters isn’t stopping there.

One of the things that have made him great is his unselfish attitude. He does everything he can to not only play well himself but help teammates as well. According to Adam Jahns of The Athletic, Castillo has given Jenkins and Borom lots of homework each week to keep them engaged. Whenever the rookies have run into challenging issues, they’ve been able to turn to Peters for advice.

Castillo has tasks for injured rookie tackles Jenkins and Larry Borom every week. They’re told to study opposing pass rushers, prepare film on them and then present it to the rest of the line.

If Jenkins and Borom have questions, they can turn to Peters.

“Jason’s a great guy; Jason’s a great individual,” Castillo said. “He’s played a lot of games and he’s played a lot of football, and the nice part of it is that I got to coach him. So we’re on the same page with a lot of the things like that. So he’s really been good for the kids. They’re not kids; he’s really been good for the young men, because they can ask him questions about how things have happened.”

This is great to hear. The Bears have high hopes for both Jenkins and Borom. They think both young men have lots of potential as future NFL blockers. It is a question of getting them healthy and refining the technique issues they suffered in college. Jenkins never got to play in training camp due to a back problem. Borom looked sharp in his opportunities before a high ankle sprain knocked him out for the past several weeks.

Second game after being signed a few weeks before the season + 39-years old..Jason Peters pic.twitter.com/Ypvs7sWQhL

Jason Peters could be invaluable to those two

Talent isn’t a major question with the two rookies. That is usually true when you get drafted. The issue most young players have is they fail to grasp the speed, complexity, and physicality of the NFL level. Countering those issues takes relentless hard work. Having a brain like Peters to pick is an unexpected boon for them. One might even say those injuries ended up being blessings in disguise.

Had Jenkins and Borom stayed healthy, the Bears wouldn’t have gone out to sign Jason Peters at all. Now with him in the fold, they suddenly have this wealth of knowledge at their disposal. If they listen to what he says and apply those lessons to their own games? Then the odds of both men becoming quality blockers for this team in the future go up.

Exactly what the Bears want.

Until then, all anybody can do is wait. Jenkins remains in recovery from back surgery. He’s unlikely to see the field until late November at the earliest. Borom still hasn’t started practicing due to the ankle issue. It may be another couple of weeks before he is ready. Hopefully, Peters can hold up.