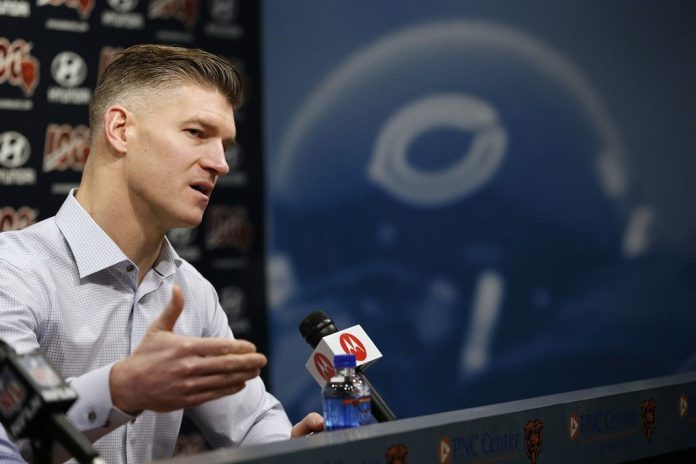 Everybody is convinced at this point that Matt Nagy is on borrowed time as the Chicago Bears head coach. He’s had four years at the job now with just one winning season and no playoff victories to show for it. In that time his offense has consistently been one of the worst in the NFL. Everybody agrees he has to go. When the subject of GM Ryan Pace comes up though? It seems like fans are more divided.

Many have the same stance on him as Nagy. He’s had one winning season since arriving in 2015. His track record is filling with some ugly misses in both the draft and free agency. Now the roster is falling apart. On the other hand, his hit rate seems to have improved over the past couple of years and a number of young players have started to play pretty well this season. Enough to suggest that maybe a better head coach could get more out of them.

The problem is do the McCaskeys want Pace hiring that next coach?

He is the one who championed Nagy back in 2018 and that didn’t work out. Maybe it might be time to get a fresh voice into the front office. There is one problem. Ownership like Pace. They’ve made this clear on multiple occasions. SM’s own sources have confirmed this as well. That might be why an alternative could be sought. Longtime insider, columnist, and radio host David Kaplan of ESPN and NBC Sports Chicago claims to know what will happen. He explained on The Rush.

It is interesting that Kaplan mentions this. He is well-connected in the Bears community. He hosts an aftershow with legends like Olin Kreutz, Alex Brown, and Lance Briggs. So it is unlikely he pulled this out of thin air. This comes across as a perfect compromise from the McCaskeys’ perspective. They get to keep their guy in a position of power while appeasing fans by bringing in a new GM who will have the final say on the roster.

The status of Ryan Pace will become clearer this week

This is due to the arrival of the NFL trade deadline. At 3-5, there is a strong case for the Bears to become sellers. Unload any veterans that have value for draft picks as they look to retool their roster around Justin Fields. If they actually do this, it might signal Pace is on safer ground than people think. If they don’t, that could mean the man isn’t willing to give up on 2021. Not when his job could be on the line.

The deadline is 4 p.m. on November 2nd. There are rumblings that one or two notable vets could be dealt. Considering the Bears only have five picks next year, it makes even more sense to get something done. It comes down to whether Ryan Pace fears for his job or not. If he does, and there are plenty of reasons to think he should, he might resist any move that would obviously make the team worse in the short term.

Kaplan’s prediction is something to file away.

There are nine games remaining on the schedule. Things can change fast in the NFL. Maybe the team turns it around. Maybe Fields goes on a tear. Either of which would bode well for Pace’s standing in the organization. If things go as expected? The odds favor a change of some kind.