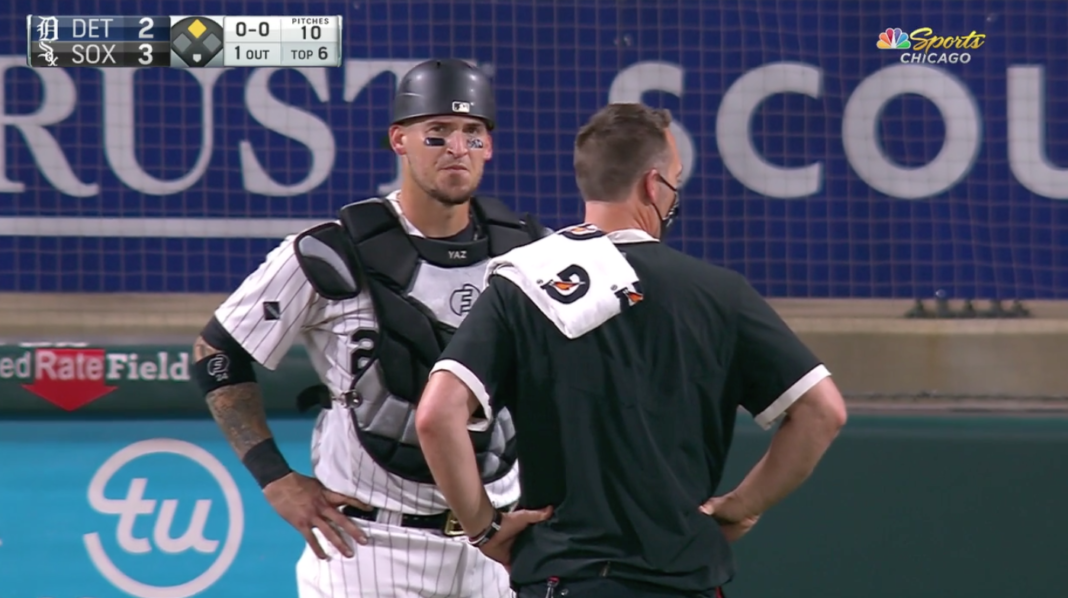 The band has been broken up. The New York Mets and their 40 million dollars were enough to break up the best catching tandem in baseball. James McCann is moving on after putting up two All-Star caliber seasons with the White Sox.

His departure was inveitable.Last offseason Yasmani Grandal solidified himself as the White Sox long term solution at catcher after signing the richest free agent deal in franchise history. With lots of money already tied up at the catcher position and McCann’s stellar play pricing himself out of Chicago, having two all-star catchers was a luxury the White Sox could not afford.

While it was sad to see McCann go it was ultimately the right decision for the White Sox. Despite popular opinion Yasmani Grandal is a better catcher than James McCann. The White Sox pitching staff will be in good hands for years to come.

White Sox fans please note where Grandal is on this chart. https://t.co/WLD5ias9Sw

While Grandal’s numbers did not jump off the page in 2020, he put together a solid season for the White Sox. He had a .351 on-base percentage that trailed only Jose Abreu and Tim Anderson. Grandal also drove in the fourth most runs for the White Sox, was sixth in home runs and led the team in walks. Drawing walks is not something the White Sox excel at so having Grandal in the lineup is luxury. He is also a better defensive catcher than McCann. Grandal is a superior pitch framer and according to Fangraphs he was the second best overall catcher in baseball.

Seeing that Grandal has the number one catcher’s spot locked up for the next half decade it would not make sense to pay a backup catcher the starting salary McCann has earned, only to see him spend the majority of his time on the bench. So with McCann out of the picture who will replace him on the depth chart?

Zach Collins would be first in line to receive a promotion. The White Sox spent their 2016 first round draft choice with the hopes that he could develop into the White Sox next catcher.  He has not quite panned out yet defensively and his offensive, which is why the Sox drafted him, has left much to be desired. Collins does possess the ability to draw walks. In only 102 plate appearances in 2019 he drew 14 free passes. He also hit 19 homers in 88 games in Triple-A Charlotte.

The second candidate is fan favorite Yermin Mercedes. The Yerminator raked during spring training, launching four home runs. During White Sox summer camp he could also be seen taking reps in left field and third base so he has some versatilely. However he spent limited time in the big leagues last season and the White Sox don’t have time for an experiment behind the plate. It is win now mode on the Southside.

I miss this already 😩🙌🏻 see you soon Chicago 🙏🏽 https://t.co/EuuCnW3nZK

The final candidate is Zeby Zavala who has a couple of major league games under his belt. During his five game stint in the big leagues, Zavala recorded his first hit. Both Mercedes and Zavala have the potential to make an impact at the major league level. The question is whether the White Sox will have the patience to give them a chance.

Rick Hahn commented on the three earlier in the week saying,

“We really do like the three options we have in house”

However he did not rule out bringing in someone from outside the organization.

“if there’s a chance we can get better, we’re going to explore it.”

The Lance Lynn trade signaled the White Sox are in the market for dependability. It also showed that they are not going to mess around while their championship window is open. The free agent catchers available include Jason Castro, Robinson Chirinos, Sandy Leon, Yadier Molina, Kurt Suzuki Mike Zunio, and our old friend Tyler Flowers.

Although Molina won a World Series playing under Tony La Russa, it seems unlikely a veteran like him will want to spend his final couple of season as Yasmani Grandal’s backup. Tyler Flowers has put together some solid season’s since he left Chicago so bringing him back in the mix would provide the White Sox with a reliable backup.

However seeing that the White Sox still need to sign a closer and potentially beef up the rotation the White Sox may be unwilling to spend money on another catcher with three options already available in the organization. Either route has it’s upside the White Sox just need to what exit to take.