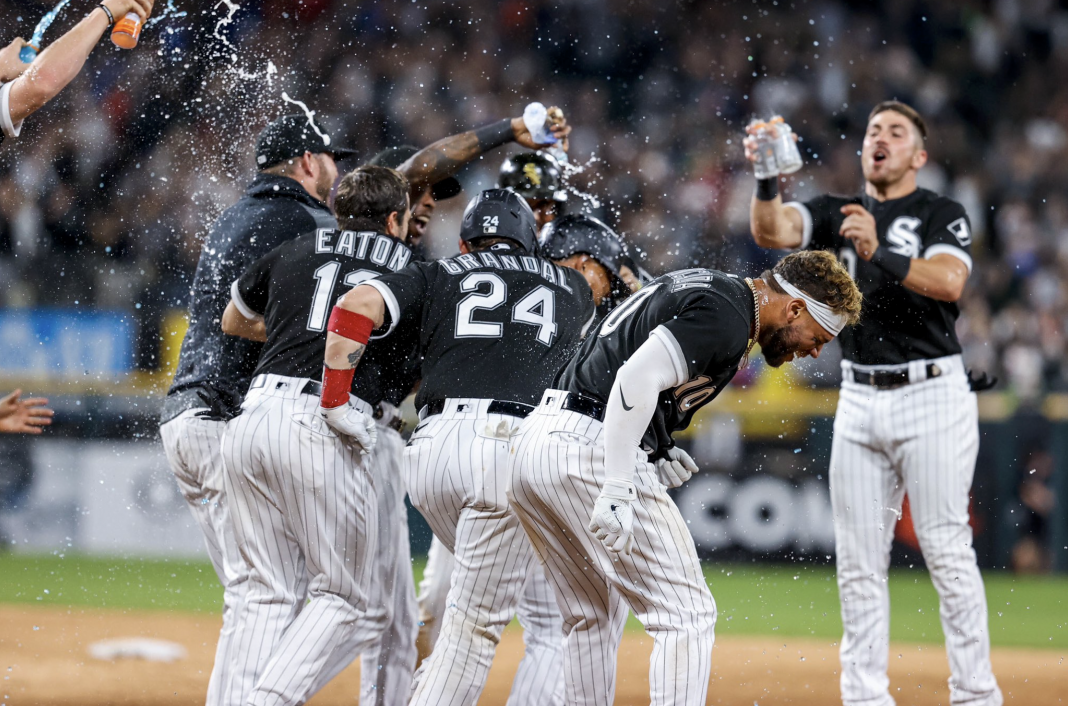 While an early June game against the lowly Detroit Tigers did not look like a big game on paper, it felt like one the White Sox needed to win.

The White dominated for four innings, then coughed up a five-run lead in the seventh. Then they came from behind to tie the game and eventually won on a walk-off. It was a roller coaster ride, with an amped-up crowd against a divison rival, that can carry a ton of weight moving forward.

These are character-building games World Series teams win. Fighting tooth and nail no matter what the score is.

“We keep talking about the guts of this team and unless you give examples, it doesn’t bring it to life,” Tony La Russa said following his 2,763 victories as a manager. “That’s a good example.”

The win tied him with John McGraw for the second most of all time. Out of all the wins he has had this is one of the more memorable ones. It was a total team effort that saw good starting pitching, timely defense, clutch hitting, and a lesson in perseverance.

Dallas Keuchel had been one of the few White Sox starting pitchers struggling as of late. Heading into his start against Detroit, he had four straight games of giving up three or more runs. He failed to go six innings in three of those starts. On Friday night, Keuchel righted the ship.

The bearded southpaw tossed six quality innings of two-run ball, with only one walk and three strikeouts. Only one of those runs was earned. With two outs in the third inning, Yoan Moncada made an error that extended the inning, allowing Jonathan Scoop to drive in the run with an RBI double. Keuchel would escape further damage by inducing a groundout the next batter.

Keuchel got ahead in the count for most of the night and was efficient. Through six innings he only needed 80 pitches. Despite giving up some base runners, he was able to induce ground ball-outs when he needed them. He even showed off his Gold-Glove ability, picking three ground balls himself.

His only earned run came when Jonathan Schoop homered off of him in the sixth inning. The White Sox can live with that. The best pitchers tend to only allow solo home runs. One could argue that the White Sox should have left him in. But with a five-run lead, Tony La Russa did not want his starter to go through the order again after the Tiger began to hit him hard, and figured his bullpen could record the final nine outs. The quality start lowered his ERA to 4.25. Unfortunately for Keuchel, he would not earn the win for his efforts.

Nick Madrigal is not known as a power hitter. When he hit his first home run in a White Sox uniform at Guaranteed Rate Field on Friday, it seemed like a fun moment that would be a footnote in a blowout win. The 5’8″ second baseman got ahold of an 85 mph changeup from Tyler Alexander and sent it 402 feet over the centerfield fence. Unlike his first career homer, Madrigal had a good idea that he got all of that one.

The home run would extend the White Sox lead to 7-2 but the homer turned out to loom large when the White Sox bullpen collapsed in a nightmare seventh inning.

With the score tied 1-1 in the fifth inning, it looked like the game was shaping up to be a pitcher’s duel. Then Tigers starter Spencer Turnbull left the game with forearm tightness and the White Sox pounced on the bullpen.

With two-on and nobody out, Leury Garcia laid down a bunt attempt and forced a fielding error. Tim Anderson Capitalized with an RBI single. Then Adam Eaton hit a ground ball that was thrown wide of home for another error. Later Jose Abreu hit a tailor-made double-play ball but the throw was botched allowed another run to score. In total, the White Sox scored five runs in the inning thanks in large part to the Tiger’s defense or lack thereof.

When Keuchel was removed with a 7-2 lead in the top of the seventh, the game should have been over. Instead, the fun was just beginning. Codi Heuer loaded the bases then made way to Evan Marshall. Marshall allowed a sac-fly then served up a three-run homer to Jonathan Schoop. Three batters later Eric Haase launched a two-run homer to center field, that flipped a 7-6 lead into an 8-7 deficit.

The bullpen nearly blew the game in the ninth inning as well. Garrett Crochet walked two batters forcing Tony La Russa to use his closer in a non save situation. Liam Hendriks was able to put out the fire, escaping the jam by getting Niko Goodrum to pop out.

Yasmani Grandal came into the night with the lowest batting average in baseball. But he also had the highest walk rate in baseball to go with it. Grandal is emerging as a three outcome player. He will either strike out, walk, or hit a home run. Two of those factored into the White Sox victory and it wasn’t the strikeout.

Fans have been griping about Grandal’s lack of production, but his patience at the plate was a game-changer on Friday night. Grandal chases the fewest amount of pitches outside the strike zone in the MLB.

During his first at-bat, he took four straight pitches to work a 3-1 count. With a hitters count, he got a pitch he liked and sent it over the left field fence for a solo home run to open the scoring.

Later in the game, he started a rally in the fifth inning with a leadoff walk and came around to score on a Tim Anderson RBI single. The White Sox batted around the order and he drew another walk. In the fifth inning, he saw a total of 10 pitches. He did not swing at a single one and generated two walks.

However, sometimes you cannot take a walk. Trailing by one run in the seventh inning is one of those times. Grandal put on his hero’s cape with two outs and hope beginning to dwindle. Yaz ripped a curveball to left field and tied the game up with his second solo home run of the game. He knew it was gone as soon as hit it, dropping the bat to watch it fly before erupting in celebration as he rounded first base.

It is the type of moment that Grandal was brought to Chicago for. A huge home run against a division rival. The homer was Grandal’s ninth of the season and fifth career game-tying home run in the seventh inning or later.

The late comeback could have a major impact on the White Sox moving forward.

“The best teams, in the past, they win those 1-0 games or games that are won by a run or games where you’re down by two or three in the seventh and end up coming out and winning it. That shows a lot. It teaches you a lot, too” Grandal said after the game.

“Especially later in the year, getting to the playoffs, it teaches you that when you’re down you’re never out. That’s what you want to be. Obviously, losing the lead right there wasn’t pretty, but the fact we came out with a win was huge.”

Grandal’s heroics would have been for nothing without the efforts of Billy Hamilton. Tony La Russa inserted Hamiltion into the game in the seventh inning as a pinch hitter for Jake Lamb. Hamilton was able to draw a walk but unable to come around and score.

Following the inning he was moved to center field for his defensive range, shifting Leury Garcia to left. In the ninth inning, the score was tied 8-8. The Tigers had the go-ahead run at first base with future Hall of Famer Miguel Cabera at the plate. Cabrera sent a line drive into the gap that spelled trouble. Hamilton got a great jump on the ball and tracked it down before crashing into the wall. The catch saved the game.

He also made a heads-up play to flip it to Garcia after he caught the ball while falling down. The quick relay prevented the runner from advancing into scoring position. His valiant effort was met with chants of “Billy Billy” from the Guaranteed Rate Field faithful.

Yermín Mercedes was working on a streak of 25 at-bats without a hit. Mercedes snapped that streak in style. Mercedes came to the plate in the ninth inning with a chance to end the emotionally draining affair.

In the bottom of the ninth with the score knotted at eight, Yoan Moncada got hit by a pitch to start the inning. The Jose Abreu hit a single, accompanied by a chorus of “MVP” chants, to advance Moncada to third. Up to the plate strode Yermin Mercedes. He got ahead in the count by laying off a 98 mph sinker from Tigers reliever José Cisnero. Cisnero’s next pitch was deposited into leftfield by Mercedes. Moncada came trotting home and Mercedes threw his arms up in jubilation as he ran to first while being chased by a mod of teammates that came storming out of the dugout.

The 35th victory of the season was signed, sealed, and delivered with an exclamation point. Mercedes was mobbed by his teammates as a smile wore across his face.

“He’s got the heart of a lion, and the situation did not scare him,” Hall of Fame manager Tony La Russa said.

Who else but the Yerminator to end such a wild, whacky and entertaining affair.Sox