The Craig Kimbrel experiment did not last long. Months after giving up Nick Madrigal and Codi Heuer to acquire Kimbrel from the Cubs, the White Sox are already looking to shop their All-Star reliever.

According to Bob Nightengale, the Chicago White Sox are expected to pick up Kimbrel’s $16 million option and then trade him during the winter. Kimbrel never panned out as the elite setup man that the White Sox hoped he would be.

With plenty of teams looking for closers this offseason, there should be a good market for Kimbrel’s services. The market for closers is thin. However, with only one year remaining on his option, the White Sox may struggle to get anything of good value in return.

The Chicago #WhiteSox are expected to pick up reliever Craig Kimbrel's $16 million option and then trade him during the winter. He badly struggled as a setup man, allowing 31 baserunners in 23 innings, including a 5.09 ERA. There will be plenty of teams looking for closers.

When the White Sox traded for Craig Kimbrel it looked like a great move. Rick Hahn was signaling that the White Sox were going all-in by acquiring a premier relief arm to bolster the back end of the bullpen. They would also have him locked up for the 2022 campaign.

Kimbrel was an All-Star with the Chicago Cubs and looked virtually unhittable. He owned a microscopic 0.49 ERA and a 0.71 WHIP. Opponents were hitting just .106 off of him and he was 23 for 25 in save opportunities.

The White Sox used him primarily as a setup man and he badly struggled, posting a 5.09 ERA. He also allowed 31 baserunners in 23 innings. When the White Sox did give him save opportunities he failed to get the job done. He only converted 1 of 4 save opportunities including back-to-back blown saves against Boston. He also allowed six home runs in 39 appearances after allowing just one on the Northside of town.

Simply put the White Sox got fleeced. A move that looked so good on paper turned out to be a disaster.

In the postseason it was even worse. Kimbrel came in a high leverage situation in Game 2 and got shelled. Kimbrel served up a home run and two earned runs in just 0.2 innings pitched. He finished the series with a 9.00 ERA in three appearances.

Kimbrel is a Hall of Fame closer. His resume speaks for himself. But he never looked comfortable in the role the White Sox were using him in. Rick Hahn paid good money to make Liam Hendriks the closer during the offseason so it is difficult to justify removing him from his position.

Some moves simply don’t pan out so the White Sox are trying to cut their losses. They may have to eat the $16 million dollars to get a good return.

It was reported that the Phillies tried to pull off a Craig Kimbrel trade at the deadline but were unsuccessful. They are going to take another crack at it this offseason.

While Bob Nightengale’s leak may have killed some of the White Sox leverage there are not many other good relief options available. The only other relievers available are Raisel Iglesias and Kenley Jansen. Don’t be surprised if the Dodger brings back Jansen so that leaves Iglesias and some lower-tier guys such as Ian Kennedy, Alex Colome, Adam Ottavino, and Jeurys Familia.

None of those guys carry the same pedigree as Kimbrel. Whoever is acquiring Kimbrel will be doing so to make him their closer. 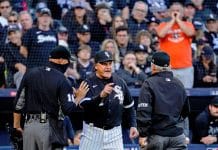