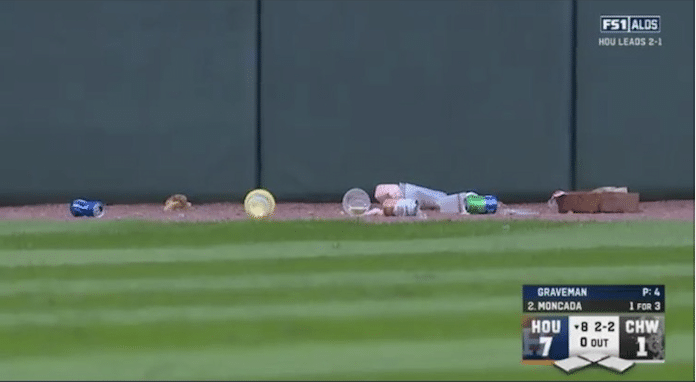 The White Sox 2021 season ended with a whimper on Tuesday afternoon. After rallying to keep their season alive two days earlier the White Sox could not muster any offense or get timely outs when they needed to.

Houston’s 10-1 victory at Guaranteed Rate Field pushed the Astros to their fifth straight American League Championship Series. The White Sox are still searching for their first playoff series victory since the World Series in 2005.

The 40,170 fans in attendance filed out of the stadium in disappointment, After a rocking atmosphere on Sunday, there wasn’t much to cheer about. However, some fans did not leave without showing their displeasure in the White Sox embarrassing showing.

The White Sox tried to build on their overwhelmingly engaged crowd on Sunday night. Things got off to a good start when Gavin Sheets got them off to an early 1-0 lead with a solo home run.

But things quickly spiraled out of control. Carlos Rodon hit Jose Altuve with a pitch then allowed a two-out walk to Alex Bregman. He then walked Yordan Alverez to load the bases. All the walks caught up to Rodon and Carlos Correa made him pay with a double to left field to score two runs.

The next inning the Astros tacked on three more runs with a Martin Maldonado RBI-single and an Alex Bregman RBI-double. Death by a thousand cuts continued when Micheal Brantley hit an RBI single in the sixth inning. Micheal Brantley struck again against Craig Kimbrel with another RBI single to make it 7-1.

To add insult to injury Jose Altuve hit a three-run homer off of Liam Hendriks to extend the lead to 10-1. White Sox pitching walked way too many hitters. White Sox bats grounded into way too many double plays and the fans could not find anything positive to get loud about despite multiple attempts.

In the eighth inning, trash could be seen littered across the warning track. The debris included soda cans, beer cups, and some empty food containers. Earlier in the season, some fans threw an inflatable trash can on the field to mock the Astros for cheating. But this feels more like a protest to how poorly the team was playing.

The left-field stands have always been one of the rowdier sections throughout the season. Between cup snakes, fights, and other debauchery throwing trash on the field comes as no surprise.

White Sox fans also booed Jake Meyers as he lied on the ground injured and cheered when Jose Altuve got hit by a pitch was also not a particularly great look.

Fans are short for fanatics for a reason. The White Sox have a passionate fan base that expected to win a World Series. Coming up 10 wins short and getting steamrolled in the process is frustrating for a group that had such high expectations. Make no mistake the White Sox have some of the most die-hard fans in baseball. When you put your heart into something sometimes you make irrational decisions. They are not the first, nor last fan base to do so.