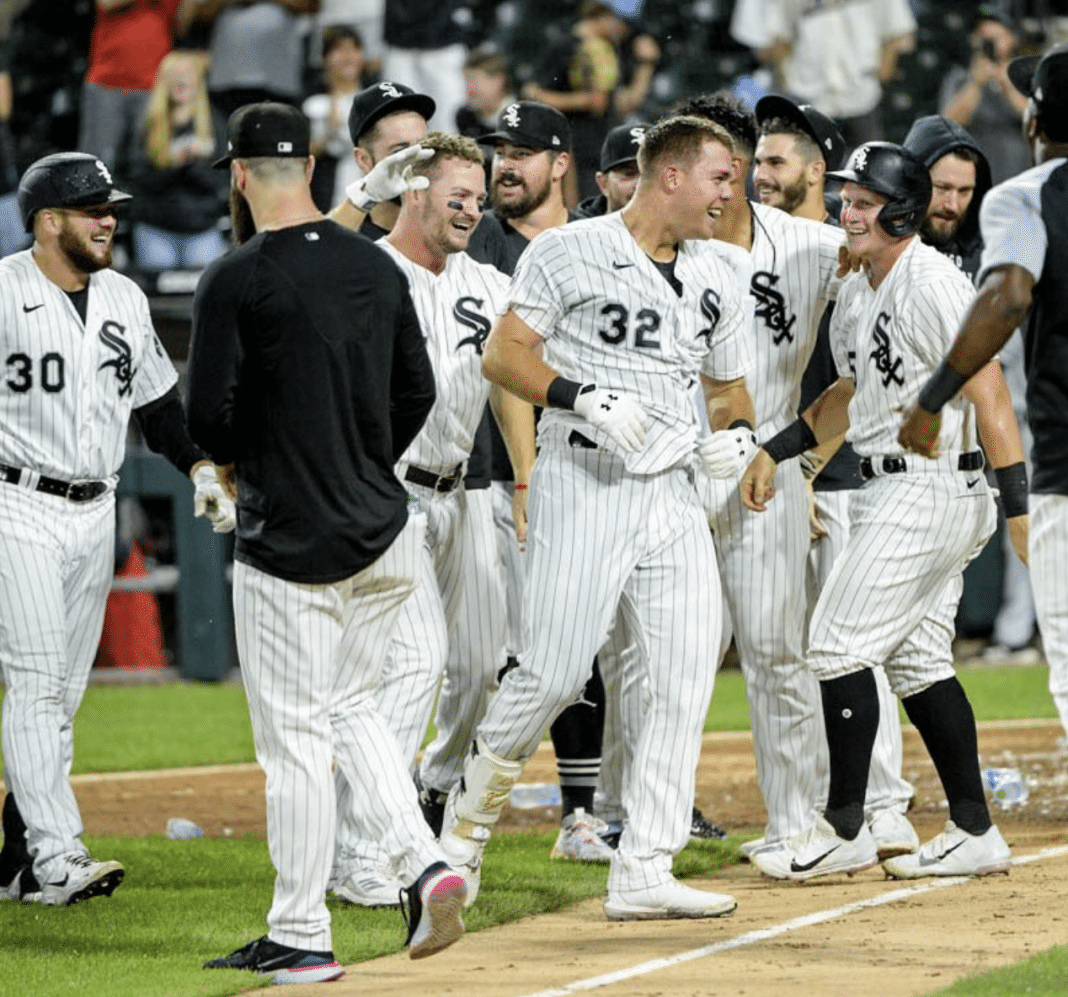 Gavin Sheets looked like a kid in a candy store as he rounded the bases Monday night. In just his 15th major league game, the rookie had just blasted his first career walk-off hit, a home run to deep right field. His clutch homerun completed a thrilling 5-3 come from behind victory over the division rival Minnesota Twins. Sheets heroics also helped salvage a doubleheader split and electrified the fans in attendance. A mob of happy teammates greeted him with Gatorade coolers and a sea of open arms as he touched home plate. Sheets could not stop smiling. He is living his best life in the major leagues.

“Between the lights and the excitement and seeing everybody out of the dugout, that was the best part,” Sheets said after the game. “This could have been a tough day for us. To get that win, that was huge for all of us. Everybody showed their emotion there. I tried to take it in with them.”

It was a far cry from earlier in the day. In the first game of the doubleheader Sheets was called upon to pinch-hit in a big spot. The White Sox were trailing 3-2 in extra innings with the go-ahead run on second base. Sheets struck out swinging and the White Sox would go onto lose a batter later.

Things did not get much better in Game 2. Jose Berrios owned him in his first at-bat, striking him out in three pitches. He disposed of Sheets via the strikeout again his second at-bat. Instead of hanging his head and becoming discouraged Sheets rose to the occasion when he faced Berrios for a third and final time.

With the White Sox trailing 3-2 and runners on first and second, Sheets could have been over anxious and chased bad pitches. Instead, he worked a 3-0 count. A wild pitch moved the tying run 90-feet from home and the go-ahead run into scoring position. After taking a pitch for a strike Sheets was sitting on a fastball 3-1. Berrios threw him his first hittable fastball all night and the rookie did not miss. He drilled it 390 feet into the right-field seats. The ball left the bat with an exit velocity of 99.4 mph.

His in-game adjustments and mental strength show his maturity as a hitter.

“The biggest thing for me was just getting a ball in the zone,” Sheets told MLB Tonight. “I put some good swings earlier in the game on him (Berrios) but he’s got some nasty changeups that was getting me below the zone so I was just trying to raise the zone a little bit there and for the first two guys to get on for me and get to second and third, that was big to get a ball to drive to the middle of the field. I was able to get one middle in and did some damage.”

He has been doing damage ever since he has arrived on the South Side. Gavin Sheets made baseball look easy his first week in the big leagues. In his first game, he recorded two hits and his first career RBI. The next night he hit his first career home run. He began his career on a four-game hit streak. In Baltimore, he homered against his dad’s former team with dozens of friends and family members in attendance for his homecoming. He already has five home runs and a .966 OPS. Sheets has provided the offense with the offensive boost they needed after Yermin Mercedes was sent down.

He is doing all of this with one of his best friends Jake Burger. The two were drafted around the same time and came up through the minor leagues together. They were then called within a week of each other. Sheets said when they walked into the clubhouse they had a moment where they looked around and said “we’re in the big leagues and we’re doing this together.”

In the dugout, you can see the joy Sheets has playing baseball. He constantly has a smile on his face and looks like he is trying to soak in every minute of being in the big leagues.

“Safe to say I want to stick, yeah,” Sheets told reporters before his debut.

This is a small sample size and pitchers will make adjustments but Gavin Sheets is doing everything he can to stick in the big leagues. On a road trip in Minnesota, he was taking fly balls in right field with Darrel Boston hours before the game in an effort to improve his outfield defense.

When Eloy Jimenez and Luis Robert return there will be moves that need to be made. There is no guarantee that Sheets will be on the roster come October. But having layers of good players such as Sheets, certainly makes Rick Hahn’s life much easier. If he keeps delivering as he did on Monday night the White Sox might have no choice but to carve out a role for him.

“I’m just trying to help the guys every day, not trying to think too much about staying. That’s my goal,” Sheets said. “I want to be here. I want to be a part of this run. This is the place to be right now.”