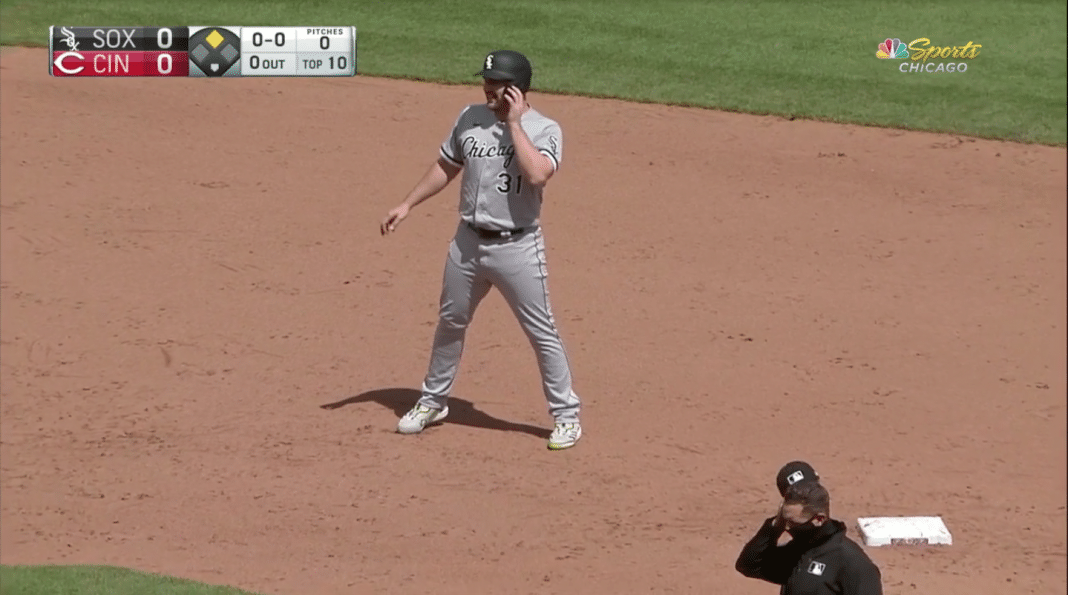 The White Sox split their two-game set against the Reds and their 1-0 loss on Wednesday has Sox fans targeting Tony La Russa once again.

In the bottom of the ninth inning, Michael Kopech got squeezed and walked Jonathan India to load the bases with two outs. La Russa made a double switch to bring in closer Liam Hendriks and Jake Lamb. Hendriks got the third out to send the game into extra innings and that’s when the shit hit the fan for La Russa.

Since last season, teams begin with a runner at second in extra innings. That runner is normally the guy who made the final out in the previous inning. With the double switch, Hendriks was that runner for the White Sox. However, there is a quirk in the rule that allows teams to use the runner before that if it’s the pitcher.

No one on the White Sox knew the rule and allowed Hendriks to be the runner. After a Yasmani Grandal walk and Leury Garcia fielder’s choice grounder the White Sox had runners at first and third with one out. Then, things got even worse.

With Billy Hamilton at the plate, the White Sox had Garcia try to steal second base. With Hendriks at third base, the Reds had no issue of throwing through and Garcia was caught stealing. Then, Hamilton struck out swinging to end the inning.

The Reds then won the game in the bottom of the 10th after a pair of singles from Nick Senzel and Jesse Winker.

Following the loss, La Russa said the White Sox didn’t know they could have opted not to have Hendriks start the 10th as the runner at second.

This is what’s on https://t.co/YLJsKuHKXZ’s site about the extra-runner rule. La Russa said they weren’t aware and thought it had to be the previous batter no matter what. Said they wanted García to steal second, rather than it being his own call pic.twitter.com/B2U9qXZkjq

Tony La Russa was unaware the White Sox could've had Jose Abreu run in the 10th inning instead of Liam Hendriks.

Tim Anderson swings at the first pitch from Sonny Gray and grounds out sharply to shortstop.

Nick Madrigal hits a grounder that takes a funny hop off the mound, but Reds’ second baseman Jonathan India makes a quick recovery and makes the play.

Joey Votto makes another nice play on a hard-hit ball from Yoan Moncada.

Nick Senzel works a nine-pitch walk to start the first against Dallas Keuchel.

Another full count and Jesse Winker gets jammed, but is able to dump the ball down the right-field line for a double. Senzel held up at third.

What a play from Jose Abreu! Votto hits a hard grounder to first, Abreu gets the out at first and then throws home to get Senzel for the double play. Reds challenge and Abreu never stepped on first, so it goes down as a fielder’s choice, but Abreu did prevent Senzel from scoring. Runners at the corners with one out.

Eugenio Suarez swings at the first pitch and grounds into an easy 6-4-3 double play.

Abreu grounds out to India to the right of second base.

A curve ball gets away from Gray and nails Andrew Vaughn on the front of his helmet.

A four-pitch walk from Yasmani Grandal.

Gray started 2-0 on Leury Garcia, but he ends striking him out swinging with a curve ball.

Billy Hamilton strikes out swinging on a fastball and the White Sox strand two runners.

Mike Moustakas flies out to Hamilton in center field.

Tyler Stephenson grounds out to Moncada.

Tyler Naquin grounds out to Madrigal and Keuchel comes back with a quick second inning.

Keuchel chops one slowly to shortstop.

Anderson singles to right field for the team’s first hit against Gray.

TA steals second and that’s his sixth stolen base.

India robs the White Sox of their first run, gloving a one-bounce rocket above his head and throwing out Moncada.

India grounds out to Madrigal.

Gray with a tapper to Keuchel for another easy out.

Anderson throws out Senzel on another slowly hit ground ball. A seven-pitch inning for Keuchel. The lefty is locked in.

Vaughn can’t check his swing and he strikes out on a breaking ball.

Winker hits one just fair beyond first base and that’s another quick out for Keuchel.

Suarez draws a walk after Abreu couldn’t bring in a foul ball that bounced off his glove by the dugout railing earlier in the plate appearance.

Moustakas lines out to Abreu at first base.

Stephenson pops it up and Abreu makes the catch in shallow right field.

Hamilton grounds out to Suarez.

Naquin with a leadoff single to right field.

Keuchel falls behind 3-0 to India, but he comes back to get a 5-4-3 double play and just like that no one is on for the pitcher. Biggest at-bat of the game and a perfect result for the Sox.

Gray with a soft come backer to Keuchel to end the inning.

Anderson lines a ball to right field, but it’s directly at Naquin.

Abreu hits a grounder to Suarez, who gets Madrigal at second for the force out.

Senzel hits it hard, but Anderson throws him out from short.

Winker grounds out to Madrigal in shallow right field.

Kyle Farmer, who came in to play first base in the last half inning, draws a walk.

Suarez lines out to Vaughn in left field.

Vaughn breaks his bat and flies out to shallow right field.

Grandal with his second walk of the game.

Garcia grounds out to second. India makes another stellar play.

Hamilton grounds out to Gray.

Moustakas grounds out to Abreu.

Stephenson strikes out swinging on a change up. That’s Keuchel’s first strikeout.

Naquin grounds out to Abreu, who dives to tag first base. Amazing start from Keuchel, who is most likely done as his spot in the lineup is due to leadoff the eighth.

Tejay Antone now pitching for the Reds and Yermin Mercedes pinch-hitting for Keuchel.

Antone freezes Mercedes with a slider for strike three.

Madrigal grounds out to Moustakas at third.

India strikes out swinging on a Kopech 98mph fastball.

Tucker Barnhart strikes out swinging on a fastball.

Winker draws a walk and the Reds have two with two outs.

Farmer pops it up to Anderson for the third out.

Tough luck for Vaughn, who hits a ground ball right up the middle that turns into a 4-3 double play.

Kopech strikes out Suarez swinging with another high fastball.

Moustakas strikes out swinging on a slider.

Alex Blandino pinch-hits and lines a single to right-center field, but gets to second on an error after Garcia has the ball bounce off his hand in the gap.

Kopech doesn’t the call on a borderline fastball up at the top of the zone and India walks to load the bases. Tony La Russa bringing in Liam Hendriks. Jake Lamb comes in for Andrew Vaughn on the double switch.

Barnhart hits a grounder to Moncada, who races to third for the out.

Hendriks begins the inning at second. Lucas Sims now pitching for the Reds.

Garcia with a slow grounder to the left side and the Reds are only able to get Grandal at second. Runners at the corners with one out and Hamilton due up.

Garcia is caught trying to steal second base for the second out of the inning.

Hamilton strikes out swinging and Hendriks is left stranded at third base.

Barnhart is the Reds’ runner at second to start the inning.

Senzel singles to left field and Barnhart stops at third.

Winker singles to center and the Reds win 1-0.