It’s no secret that White Sox fans are unhappy. A team that entered the season with championship aspirations has drastically underachieved. The White Sox have been horrible defensively along the way, sloppy on the basepaths, and sometimes look disengaged. Many of these things point to coaching.

Much of the fan’s anger has been directed at manager Tony La Russa. According to a poll from SB Nation, 87 percent of White Sox fans want Tony La Russa fired.

He then joined the St Louis Cardinals in 1996. In 16 seasons in St. Louis, he captured two more World Series and added another manager of the year award to his collection in 2002. After his retirement, he was inducted into the Hall of Fame in 2014. After firing Rick Renteria, the White Sox lured him out of retirement in 2020. 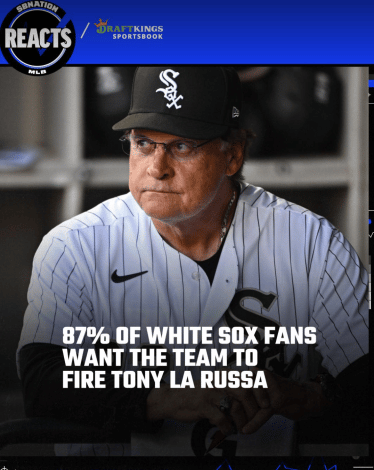 However, La Russa’s hiring was controversial, considering he had multiple DUIs and hadn’t managed in over a decade. His hiring was met with vitriol across White Sox Twitter. La Russa was mainly hired because his buddy Jerry Reinsoft felt bad about the White Sox firing him in 1986.

The fan’s disdain has only grown since his hiring. In 2021 La Russa forgot a rule, then made headlines when he scolded Yermin Mercedes for hitting a home run on a 3-0 count. Adding insult to injury, the White Sox were eliminated from the ALDS in dominating fashion.

This season La Russa has implemented a variety of head-scratching lineups, got mocked by the Dodgers broadcast team for batting Leury Garcia leadoff, and intentionally walked Trea Turner on a 1-2 count.

On June 11th, a chorus of “Fire Tony” chants filled Guaranteed Rate Field after the White Sox blew a 5-0 lead against the Texas Rangers and lost 11-9 in extra innings.

After the game, La Russa addressed the chants saying,

That was just the start, however. Another loud “Fire Tony” chant broke out on June 23rd against the Blue Jays. Fans have plenty of reason to be upset. Entering Monday’s game against the Angels, the White Sox are just 34-37 and six games out of first place in the AL Central.

Not all of this is La Russa’s fault. Injuries have hampered the White Sox, and Rick Hahn has failed to address some of their most significant needs this offseason. Yoan Moncada and Yasmani Grandal having the worse statistical seasons of their careers does not help matters.

But, La Russa is clearly not the manager he once was. His shortcomings have transformed him from one of the greatest managers of his generation into a laughing stock.

La Russa did not hire himself. It is not his fault he is their manager. Only two people his age have ever managed an MLB game. Jack McKeon a few years ago for less than a season, and Connie Mack like 80 years ago. Nobody his age has ever coached an NFL or NBA game. Because the physical and mental demands of coaching a pro sports team are not a good fit for someone who is almost 80. This is all Reinsdorf’s idiotic fault for hiring him. And his fault for not firing him weeks ago when it was obvious… Read more »

LaRussa is past his mental prime. He is still good, but a couple of games lacked common sense.Some of the players have not performed as expected.Get rid of Grandal and Harrison.

Good defense, smart baserunning, solid pitching, and clutch hitting are not something that has been said in the same...

Dylan Cease extended his streak of allowing one earned run or less to fourteen straight games on Thursday afternoon....

The second inning of Wednesday night's contest against the Kansas City Royals summed up the White Sox evening in...

Lenyn Sosa's first stint in the major leagues did not go as planned. He went 1-for-12 during his first...

Tim Anderson will miss 4-6 weeks due to a sagittal band tear on the middle finger of his left...

The Front Office Sleeps With The Fishes: No New White Sox

And on August 2nd, 2022, the White Sox faithful let out another long moan. Another season in the trash,...

What the Hell Was That, Rick Hahn? A Failed Trade Deadline By The White Sox

The White Sox entered the final day of the trade deadline as a .500 team, underachieving, but still very...

Rick Hahn had some explaining to do on Tuesday night. The White Sox general manager looked worn down and...