There was a sense of excitement in the air today as pitchers and catchers reported to Mesa for the Cubs 2017 Spring Training. The Cubs find themselves in a place that they haven’t been in since the 1909 season — defending World Champions.

In case you’re wondering, the Cubs won 104 games in 1909, but finished second in the National League, 6½ games behind the Pittsburgh Pirates. The Cubs had won the pennant the previous three years and would win it again in 1910.

So, if history holds true, the Cubs will finish second in the NL Central this year before they re-emerge to win the pennant again in 2018 right?

There wasn’t a sense of complacency at all during Day 1 of Spring Training and all the players have talked about how great last year was, but are well aware that 2017 is a brand new season. And what better way to get that message across by putting a catch phrase on a t-shirt?

And for once, it’s not an idea by Joe Maddon.

A new message saying that the time has come to officially move on from the 2016 season has now been mentioned by fan favorite Kyle Schwarber.

After the new “Maddonism” was introduced today, Schwarber was asked if he had any ideas for a t-shirt.

Schwarber's new #Cubs t-shirt idea…"turn the page" & put David Ross's face on the back. That was always his catch phrase…not bad🤔

Leave it up to Rossy to be the inspiration for a new t-shirt even after he’s left the team. I have to admit that this is a pretty damn good slogan as most of us Cubs fans are still celebrating 2016. Now that 2017 is officially underway, I think it’s in everyone’s best interest to take heed to Rossy’s famous catch phrase, “turn the page.”

The people at Urban Gameday have got you covered. 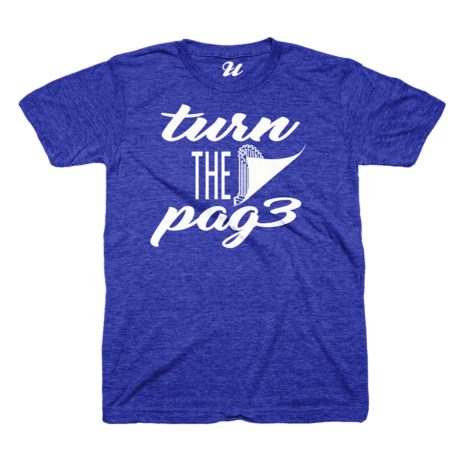 Get your t-shirt here.

Ricketts and Hoyer Say Cubs Will Be Aggressive in Free Agency

The Chicago Cubs needed a lot of things to go right to have any kind of success in 2022...

Now past the August 2nd trade deadline, many Cubs fans were elated when the club decided against trading All-Stars...

Jason Heyward Will Not Play For the Chicago Cubs Again

Jason Heyward, who signed the largest contract in Chicago Cubs history, will not play another game for the team....

Much will be made the rest of the season about the Cubs' decision to not trade Willson Contreras and...

3 Cubs Prospects Poised To Make A Splash This Year

The Chicago Cubs will not be playing for a postseason berth this season. However, there is still plenty to...

Today is deadline day. The Major League Baseball Trade Deadline expires at midnight, and a flurry of moves is...

Cubs Have Another Emerging Starter

The Chicago Cubs are on a heater! They haven't lost since the All-Star Game and have the longest win...

The Chicago Cubs are back! Fresh off a sweep of the Phillies, their first in Philadelphia since 2000 --...